As the story goes, The Polar Express is a mysterious train that appears in front of a dispirited boy's house one winter night to take him on a magical journey to the North Pole. From November through January each year, residents and visitors alike have a chance to re-create that magical journey right here in Durango. Though it doesn't pick up from outside of homes, the Durango and Silverton Narrow Gauge Polar Express does take lucky passengers from downtown to its version of the North Pole (aka north Durango.) Not only does the train replicate the ride but almost every other detail from the famous story: hot chocolate passed out with song and dance; a man to punch passengers’ golden tickets; and tiny silver bells given out by Santa himself. In fact, it’s so close to the real deal that before boarding the train, you’ll want to be sure to pinch yourself – and check for holes in the pockets of your pajamas. 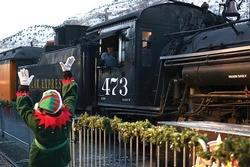 An elf waves off the Polar Express. 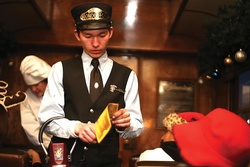 A conductor punches golden tickets to the North Pole. 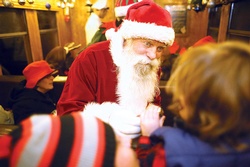 Santa himself passes out silver bells to passengers.