Durango spread its wings and flew away at the La Plata County Airport's second annual Aviation Celebration last Saturday. The free event allowed folks to view military and private aircrafts as well as watch skydivers from the U.S. Army Golden Knights parachute jump team, who put on a colorful and mesmerizing show. The event offered airplane rides and a chance to drive a Ferrari or Lamborghini at top speeds down the runway – for a fee, but a large drop in many people’s bucket lists. A crowd of young and old left the event with big smiles, fascinating stories and stiff necks from looking up all day.

In a week of unusual occurrences over Durango, a member of the Army’s Golden Knights parachute team leaves a pink streak across the sky at last Saturday’s Aviation Celebration at the Durango-La Plata County Regional Airport. 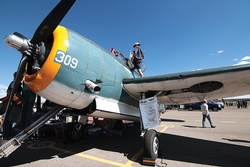 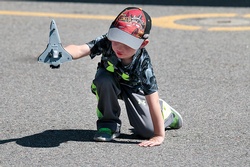 Everyone, young and old, got in on the action. 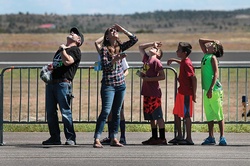 There was plenty of neck craning to be had as bystanders attempted to discern between birds, planes and an occasional superman. 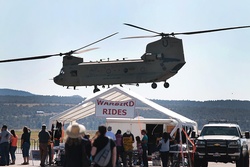 A  CH-47 F Chinook helicopter hovers close to the ground creating quite a spectacle. 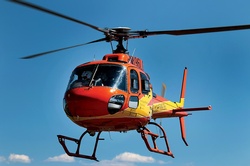 A Flight For Life helicopter flies over a crowd at the La Plata County airport Saturday afternoon for the second annual Aviation Celebration.