Fermenting change
Living Tree seeks to change the world, or just Durango, one kombucha at a time 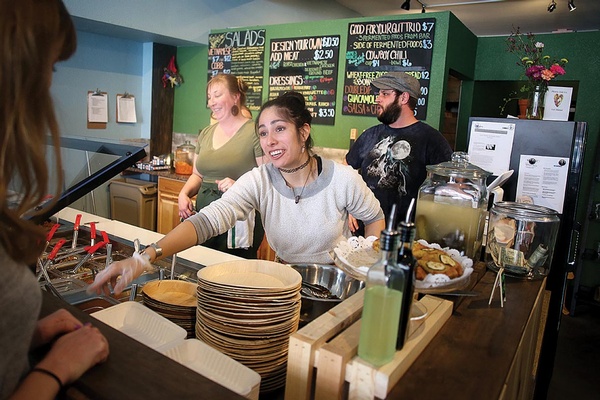 Jazzy Griffith chats with a lunch customer Tuesday at The Living Tree./Photo by Jennaye Derge

My teen-age daughter produces more than one bag of trash per week. Actually, there’s about that much on her floor right now – the flotsam of angst-ridden youth. And really, there’s nothing strange about that. It just is what it is. But recently, a restaurant opened right here in Durango that aims to produce only one bagful of trash per week. More often than not, they reach their goal. Think about that. An entire restaurant full of employees and customers and a single, lonely bag of trash on the curb every week. It’s impressive, but I’ll get to that in a second.
The Living Tree is a salad bar on steroids that moved into 680 Main Ave., where Giddy-Up 409 used to be. Restaurants usually smell the same: a heady aroma of fried foods and bubbling beer. But there’s something markedly different about the scent inside The Living Tree. It’s alive, pungent and novel, and you wake up when you smell it. And you get hungry. On a latent level, our bodies know what we’re supposed to be eating, and the foods in The Living Tree stoke that atavistic need for good, natural food.

The things they serve sound just as good as they smell: Vietnamese chicken salad with house-made kimchi, grass-fed cowboy chili with chunks of brisket, taco salad with salsa and probiotic guacamole (which costs a tad extra).

That wasn’t a typo. The Living Tree’s guac is probiotic, enriched by brine from fermented vegetables, and every bite is filled with billions of little living creatures. I had some the last time I went, and I took my first bite in slow motion – a monstrous beast, standing a few miles tall, devouring entire colonies of probiotic bacteria. Can you hear them scream? Seriously though, it feels good to eat live food. “Let food be thy medicine and medicine be thy food,” Hippocrates said.

As a side note, that Hippocrates was a pretty cool guy. Most of us are familiar with parts of his Hippocratic oath, most notably the “do no harm” bit, so it’s safe to say his food philosophy is trustworthy. And maybe that’s why his quotes can be found hanging everywhere inside The Living Tree. But back to the living probiotic foods...

There’s a smattering of them in this new restaurant: living herbed buttermilk ranch dressing; apple cider vinaigrette; carefully made kimchi; enormous pickles; beets; salsa and Caesar. And best of all, the kombucha on tap. Yeah, that’s right. My head exploded when I heard that.

Kombucha is one of those things you shouldn’t think about too much if you’re to enjoy it, kind of like hotdogs. You turn a blind eye to what’s in them because they taste so damned good. Basically, kombucha is fermented tea, and you can make it yourself if you’re not afraid to peak behind the curtain. In the refrigerated section of Nature’s O, you can buy your very own “scoby.” It looks like a dead jellyfish, but really, it’s a snotty, gelatinous mass of living bacteria. You take it home, put it in a batch of homemade sweet tea (preferably in a glass container), and then you put it someplace warm and dark and forget about it for a week or two. The scoby grows and grows, feeding off the sugar in the tea, and in so doing, carbonates the tea, filling it with healthy, probiotic bacteria. When it’s done, you take out the scoby to save it for the next batch, and you drink your kombucha like a bona fide health nut.

But now, instead of brewing it or buying bottles at the store, you can just order a cup with your salad downtown. Dear god! Why did it take our species so long to put that stuff on tap? And The Living Tree’s flavors are ridiculously good: chamomile grapefruit, tarragon carrot, and a few others that rotate.

I tracked down one of the owners, Nicole Tribble, and asked her a few questions. I expected to meet a living-food guru, floating a foot off the ground, cast in a hallowed light. But Nicole turned out to just be a normal local like the rest of us. It’s just that she cares enough about something – healthy, sustainable restaurant proprietorship – to make a change. “Our mission is to educate our community on the importance of cultured foods, soil health, biodiversity, non CAFO and organic farming,” said Nicole. And as to the importance of probiotics, Nicole said they assist in everything from digestion to the immune system and even our brain. “Research is showing that depression, anxiety and other mental disorders are linked to our gut microbes, or lack thereof,” she said.

How cool is that? Even more, Nicole and her husband, Christian, dreamed up The Living Tree on their solstice vision board, and a year later, they opened their doors on the solstice to mark the occasion.

Alright... back to the beginning. Every scrap of waste generated in The Living Tree is compostable; you won’t find a traditional “trash can” anywhere. The bowls and plates, forks and spoons, napkins and cups; they’re all compostable. That’s how they’ve been able to produce that one, lonely bag of trash. I asked Nicole about that, because if she can limit herself to one bag, why not try for less? She said the biggest issue is food packaging. The Living Tree orders most of its food from companies that supply grocery stores, so many of the items are packaged for retail. As a workaround, The Living Tree is looking into sourcing their food primarily from local, organic farms, but that’ll take time.

It’s no secret that our culture wastes a ridiculous amount of food, and in a way, this restaurant embodies the necessary change. The front-end manager of The Living Tree used to be the affable produce guy at North City Market, and if you ask him, he’ll tell you about the frustration that comes from working somewhere without sustainable practices. Nicole is familiar with it too. She and her husband both worked at grocery stores, and they’ve witnessed the massive amounts of waste produced by these places. Most large chains throw away all their old produce because they’re afraid of giving it away (someone could get sick and sue, after all.)

“It’s so sad to see good, edible food go to waste when so many go hungry, not just in Third World countries, but right here in La Plata County,” says Nicole.

This can’t happen in totality and nobody is saying it should: we all love fried foods and bubbling beer. I, too, get lazy from time to time and create just as much trash as my teen-age daughter. But perhaps, by reading this story, one more person will become a tad bit more aware, his or her interest germinated. I know at the very least, through this writer, Nicole has come one person closer to her goal. Cheers, and healthy eating, Durango. 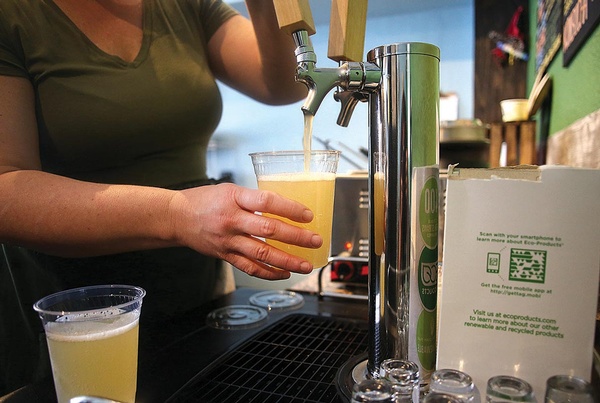 Sure you can make kombucha at home – but why bother when The Living Tree has it on tap?/Photo by Jennaye Derge