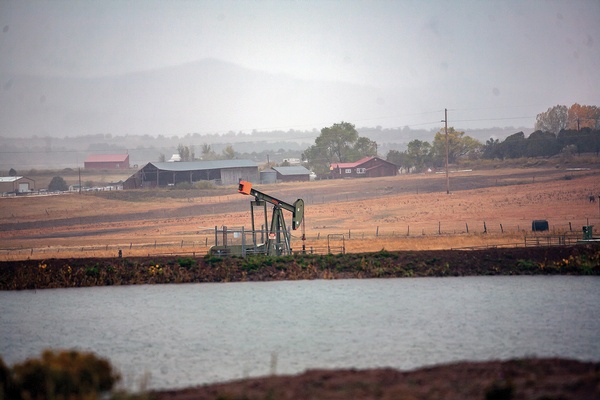 A pump jack runs near a farm in the Oxford area. Such sights could become a thing of the past if Proposition 112 passes./ Photo by Stephen Eginoire

Proposition 112 would require a setback for all future oil and natural gas development of 2,500 feet from occupied structures (aka: buildings where people live or work), water sources and other areas considered vulnerable (parks, sports fields, reservoirs and more).

On the pro side, this measure is all about public health and the environment. It would reduce health risks and other hazards for those living and working near oil and gas wells. It would protect community water sources and recreation areas from possible contamination. It would even be a valuable tool for property owners, who would know exactly where future oil and gas development could occur.

On the other side of the debate, there are questions about what oil and gas assets – if any – would be left to develop.

According to the Colorado Oil and Gas Conservation Commission, the state agency in charge of development, about 85 percent of all non-federal lands in Colorado would immediately be off the table.

Christi Zeller, executive director for The Energy Council, a nonprofit trade organization representing natural gas operators, industry suppliers, and mineral and surface owners, said in La Plata County it would exclude 99 percent of all non-federal lands – including those with existing well pads.

“Specific to La Plata County, the natural gas industry currently pays over 26 percent of all property taxes in the county, which is vital to funding local school districts – including Bayfield, Durango and Ignacio – as well as road and bridge, and health and human services,” Zeller said in an email. “If Proposition 112 passes, La Plata County will lose millions of dollars in tax revenue, and the county and special districts will be forced to slash their budgets.”

It’s accepted by both sides of the debate that property tax, income tax, sales tax and other types of revenues would decrease, but there’s no way to estimate those losses.

Currently the COGCC requires a setback of 500 feet from a home or other occupied building, and 1,000 feet from a high-occupancy building, like a school or hospital. The commission does have the authority to increase the setback.

The commission can also accept waivers in certain situations with the approval of a building owner. However, Proposition 112 would not allow the COGCC to retain this authority.

The first thing to point out is that because Amendment 74 would change the Colorado Constitution, it requires at least 55 percent of voter approval to pass.

This amendment is meant to compensate property owners in the state “when a government law or regulation reduces the fair market value of the property,” the ballot measure reads.

The specific language that would go into the state’s constitution does explain who might decide on this compensation, but it doesn’t put any limits of what kind of laws or regulations would be applicable. And, therein lies the rub for opponents of the measure.

“If Amendment 74 passes, it will allow any business or individual to sue over any law they disagree with, opening the floodgates to frivolous and costly lawsuits,” Lisa Pool, southwest field organizer for Conservation Colorado, said in an email. “To pay for these legal claims, taxes could go up, and essential community services, like police and fire, could be reduced.”

An example of the pro argument would be, if voters passed a measure that banned coal mines, any resident who owned coal mines that were then worthless would be compensated by the state or local government responsible for the ban.

Under current law, the government does compensate property owners for losses due to regulatory changes, but only if it’s an almost-total loss.

With the Taxpayer Bill of Rights, commonly referred to as TABOR, the only thing any state or local government can do without voter approval is lower taxes. Municipalities cannot take out loans, raise taxes or even make adjustments to dedicated funding without putting it on the ballot.

This amendment has two specific parts. First are the changes to income taxes.

Currently, everyone in the state pays the same income tax rate of 4.63 percent. This measure would change the tax tables and rates people pay. Individuals and joint filers making less than $150,000 would see their rates stay the same. Those earning $150,000 or more would see incremental increases topping out at a 8.25 percent for those making more than $500,000. The corporate tax rate – for all earners – would go up 1.37 percent to 6 percent. These income tax and corporate tax increases would be dedicated to public school funding.

The other part of Amendment 73 is a change to property taxes.

Under the current property tax formula, the rate used to calculate assessed values will drop next year to 6.1 percent. This measure would raise the residential rate to 7.0 percent – and keep it there. The nonresidential rate (commercial property tax rate) would be lowered from 29 percent to 24 percent.

These changes to property tax calculations would only apply to school district funding (making it even more fun to figure out your taxes).

Another aspect of this measure is its effect on taxpayers in the Durango 9-R School District, who approved a local property tax increase to fund education needs in 2016. This measure would certainly increase those taxes even more, and it’s unknown what the district would do with any excess funds – further adding to the debate.

These propositions are considered to be competing with each other. Proposition 109 would allow the state to borrow $3.5 billion for specific highway projects – but that’s it. The measure does not include any language on how Colorado would pay off those loans.

And here are, essentially, the arguments for and against it: The state needs to invest in highway projects, however, there needs to be some assurance these loans can be paid back without gutting other state programs.

This is where Proposition 110 comes in. The measure allows the state to borrow more money, $6 billion, and it offers a payment solution: a sales tax increase of .62 percent. The current sales tax rate in Durango is 7.9 percent. This includes a state tax of 2.9 percent, a county tax of 2 percent and the city’s 3 percent.

If Proposition 110 passes, the state’s rate would go up to 3.52 percent – an increase that would sunset in 20 years and be used exclusively for transportation projects.

In two ways, Proposition 110 also has a direct effect on Durango and La Plata residents. First, 40 percent of the tax revenues would go to local governments across the state and 15 percent to multimodal transportation projects. There’s no doubt some of these funds would end up in Southwest Colorado, helping with transportation and transit shortfalls. How much, however, is an unknown.

Second, the city of Durango is also asking voters for a sales tax increase. If both measures pass – the city’s rate would be 3.55 percent, the county’s 2 percent and the state 3.52 – the total sales tax rate in Durango would be 9.07 percent (compared to the current rate of 7.9 percent).

In addition, if both measures pass and the city receives some help with transportation funding, the revenues raised from Question 2A would go even further to help fund police and provide for other public safety needs.

The final financial matter for voters to consider is Proposition 111. Essentially, it simplifies what payday loan companies can charge customers – a 36 percent APR, or annual percentage rate. It also expands the definition of unfair or deceptive practices for these companies.

The pro argument is this will help protect consumers from predatory lending. The con argument is regulating these companies will drive them out of Colorado, leaving their customers in an even worse financial situation – bouncing checks, using high-interest credit cards and more.

The Telegraph returns next week with the other half of Colorado’s lucky – or not so lucky – 13 ballot measures. To keep up with the breakdown, visit www.durangotelegraph.com.

Last week, a coalition of environmental groups filed a lawsuit against the Trump administration over what they describe as a “gutting” of the 2016 methane waste rule.

The suit claims when the Bureau of Land Management rescinded the rule last month, it ignored the rule’s benefits to public health and the environment. In addition, the BLM’s cost-benefit analysis of the rule did not include key global climate costs.

“Communities here in the Four Corners, under the methane hot spot, have spoken out again and again in support of common-sense protections from unnecessary methane waste,” Mike Eisenfeld, energy and climate program manager for the San Juan Citizens Alliance, said in a press release. “We are being harmed by unnecessary air pollution and its public health consequences, and our tax dollars are being needlessly wasted.”

The lawsuit was filed in U.S. District Court by Earthworks, Dine? Citizens Against Ruining Our Environment, WildEarth Guardians, San Juan Citizens Alliance and others.

Enacted at the tail end of the Obama administration, the 2016 methane waste rule requires oil and gas companies using public land to take specific measures to prevent the release of methane, a potent greenhouse gas.

The rule rests on two main pillars. First, capturing the methane instead of releasing it, which would be a financial windfall worth millions in lost royalties every year. Second, the rule could help address the methane hotspot hovering over the Four Corners. Estimated to be about 2,500 square miles, it was discovered by NASA in 2014.

Once the rule became official, the only way to completely repeal it was a vote from Congress. Last year, the U.S. House of Representatives voted to repeal the rule, but the Senate chose to keep it in place. Since then, the Department of the Interior has looked into ways of delaying or limiting the rule.

Last month, the BLM announced it was removing most of the provisions of the rule, which the coalition’s members said essentially “gutted” it. In response, they filed suit.

So far, there has been no response from the BLM, U.S. Interior Secretary Ryan Zinke or the Trump administration.