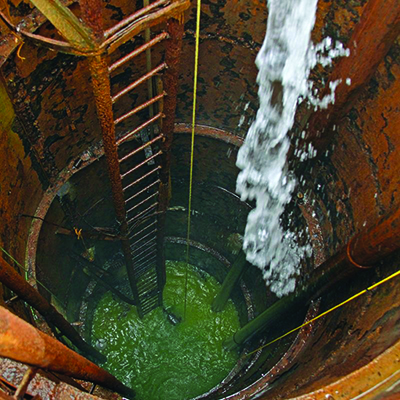 It all began with a story. An article published in a 1965 edition of Reader’s Digest telling the tale of a mysterious island off the southern coast of Nova Scotia, Canada, called Oak Island. It’s one of about 350 small, tree-covered islands dotting Mahone Bay.

In the summer of 1795, as the story goes, three boys were out fishing when they saw a bright light coming from the island. They paddled over and went ashore in search of the source, but when they got to the beach the light was gone.

Instead, they discovered a depression in the ground near a large oak tree. Thinking it could lead to something recently buried, they decided to dig.

About 10 feet down, they hit a square platform made of rotting oak logs. Intrigued by the odd find, the three decided to keep digging and every 10 feet they came to another platform of oak logs.

It might seem rather odd to find oak platforms every 10 feet underground on a remote island in Nova Scotia, but the real mystery began when they reached 90 feet.

Again, they found the logs. This time, however, embedded in the platform was a flat stone slab with writing carved into it. It wasn’t any known language, but looked more like hieroglyphics. The moment the stone slab was removed, the shaft filled with sea water.

The boys were forced to stop digging – and a 225-year treasure hunt was under way. Since that day, many people have tried to get back down to the bottom of what’s become known as The Money Pit. Even former U.S. President Franklin D. Roosevelt joined a salvage group in 1909 in an attempt to discover any riches that might lie at the bottom.

But, no matter how much capital, ingenuity or elbow grease searchers put into digging, no one has been able to tame the flood trap and solve the mystery.

Two brothers, Rick and Marty Lagina, are spearheading the most recent effort – which has been chronicled in a successful History Channel show called “The Curse of Oak Island,” now in its seventh season.

The brothers’ efforts have been slow, steady and methodical. They’ve kept detailed records, and sought out historical, scientific and practical expertise from sources across the globe. They’ve used whatever tool matched the situation, from shovel and metal detector to radar and seismic testing.

Of course, everyone wants to find treasure. But, the Laginas’ search has also been about solving the mystery and even healing old wounds carried by those who came before them.

One family lost a father and brother. Two men became bitter rivals. Tragedy befell families and companies in the search for treasure so often, the endeavor was thought to be cursed – thus the namesake of the TV show.

In the 15 years the brothers have been at the helm of the hunt, they’ve been able to bring the relatives of the men who died back to the island to find closure. After years of trying, they were also able to convince the two bitter rivals to join their team.

And, although the two rivals did not make amends before they both passed, their sons stood side-by-side in this season’s premiere episode as another discovery was made in what’s known as The Swamp.

From above, Oak Island looks like an elephant with a distinct body, head and trunk. Right at the neck of the elephant is a swamp that many believe is man-made. In the premiere episode, a diver discovered a curious stone pathway underneath the murky waters of the swamp.

It’s certainly not the strangest thing discovered on the island.

While searching in the area of the original Money Pit, the brothers found human bone fragments 160 feet underground. One came from someone of European descent, the other from the Middle East. Along with the bones, they dug up pottery shards, pieces of leather book-binding, and scraps of parchment covered in red ink.

What many consider the most profound artifact discovered on the island, however, is a medieval lead cross. It was found to be more than 600 years old, and the lead was traced back to mines in Southern France that closed by 1500 AD.

The island is literally covered with ancient relics, mysterious symbols carved into stones, bizarre wooden structures buried several feet below the seabed and other anomalies that beg the question – what the hell happened here?

Some have speculated nothing.

Roosevelt believed the crown jewels of Marie Antoinette – which were lost to history about the same time she lost her head – are buried there.

Others think it could hide Captain Kidd’s missing gold or even religious artifacts, like the Arc of the Covenant. It disappeared when the Knights Templar were hunted down on Oct. 13, 1307 (which is also where the number 13 got its unlucky origins – but that’s another story).

Obviously, I’m a fan of the show and the mystery. I actually remember reading the Reader’s Digest story a long, long time ago when card catalogs were the only way to find books in the library. And, I wasn’t the only one who was inspired by the article.

It’s the very reason one of the Lagina brothers, Rick, began researching the story decades ago. It’s the reason he convinced his brother to invest in the island when it went up for sale in 2005.
It’s also the reason that the men who became rivals and the family who lost two members first came to Nova Scotia in the 1960s.

That one story took hold of their imaginations, forever changing the course of their lives. So, the next time you ponder a tale inside the pages of the Telegraph, consider what it could inspire – it just might change your life. Or at the very least, create a little mystery.