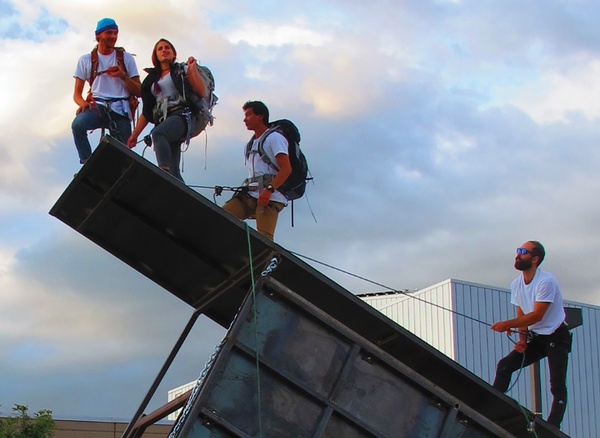 Members of Theater of the Wild in a scene from "Lobuje" earlier this summer at the Fringe Festival in Fort Collins. The play, about a real- life climb to the 20,000-foot Himalayan peak, was performed on a makeshift climbing wall on the flatbed of a truck./Courtesy photo

“I’m saying, let’s take f***ing action toward things that we’re passionate about, without apologizing and without reservation. We don’t have time for that,” Mike Largent, founder of Durango-based performance art troupe Theatre of the Wild, said.

It sounds like a battle cry, a pep rally-to-action before facing some sort of epic challenge. But Theatre of the Wild is out to challenge ideas about who and what exactly is “epic,” especially, but not exclusively, in the wild.

Truth is, we’re getting bored with titans. In the last few years, I’ve heard more than one person “meh” when the latest mountain climber story hits the theaters. With 500,000 peak baggers in Colorado alone, it’s getting so even free-soloist Alex Honnold has a hard time maintaining his level of appeal.

Audiences are starting to desensitize to epicness. We’ve struggled and lost right along with the best climbers in the world. Yet another climber spends days, weeks or even years confronting his or her limitations  by struggling to the top of something craggy? Lucky them, but what else is new?

Here’s something new: a live theater production that features climbers, not sponsored by Black Diamond or North Face, reveling in the adventure of the personal.

“Why do you want to climb this mountain?” Largent roars, drill sergeant-style, into each climber’s face in the opening scene for the troupe’s new production, “Lobuje.”

“To tell a mountain climber story that doesn’t end with James Franco under a rock, sir!”

It’s true that when we watch movies or read the titan’s tales, we get jazzed, eager to run out and start conquering mountains or slaying dragons. But sometimes people just feel like these tales are more demoralizing than inspiring. We can’t relate. Sure, they make us dream big. We spend every spare moment at the crag and lots of moolah on gear. Yet, at some point, we realize we’re just not going to be the next Honnold or Tommy Caldwell.

Which isn’t to say it’s not worth trying. It’s just that most of us just don’t have the time and money to sustain the lifestyle necessary to hold on till Arc’teryx looks our way. Personally, every time I’ve approached breaking the V3/V4 barrier, I’ve either broken a bone, had to work more or gotten pregnant. Life gets in the way. With the current philosophical emphasis being “go big or go home,” it’s hard to rally for adventures that seem, on the surface, nothing to write home about.

Undoing that mindset is one of the goals of Theatre of the Wild’s “Lobuje.” Their message: You do you, and to heck with bragging rights. They want to remind us that it’s not about what we get to the top of, or how many miles we walk, run, paddle or crawl. It’s that we’re showing up, for ourselves, in whatever way  that manifests for us at the time, regardless of whether anyone else will be impressed.

The four troupe members (Largent, Sarah Grizzard, Theo Reitswiesner and Gustavo Palma) are no strangers to obstacles. Each of them worked long hours or several jobs at once to make “Lobuje” happen. When hoops popped up, they hopped through them. And they believe we can all do a little more ourselves if we’re willing to jump, too. “We want people to ask themselves: What’s their version of their stories? What do they want to do? Not talk about, not daydream, not read about, but do?” says Largent.

Last July, the Durango-based troupe debuted their theatrical docu-comedy at the Fort Collins Fringe Festival (earning a People’s Choice Award). The first ever recorded play documenting a mountain climb, “Lobuje” follows a motley crew of performers as they attempt to summit the 20,000-foot Himalayan Peak of the same name.

As the group takes us on their true, very relatable 2018 journey, they reveal the unique, the tragic and the quirky in each of their personal stories. With raw honesty and courage, they give the audience full exposure to what drives each of them to subject themselves to the kind of life-and-death tests that await. While “Lobuje” isn’t one of the highest peaks in the world, it’s still a big, freaking craggy mountain covered in ice with the hiking starting at around 15,000 feet – 7,000 feet above the danger line for altitude sickness (which Largent got and nearly succumbed to, by the way.)

And “by the way” is how that part of the story is told, not as the focus, but merely as an aside of an adventure that is sometimes frightening, sometimes funny. Three of the climbers actually start the long trek with a martini hangover, which they had to endure while navigating foreign systems and technological quirks.

While it’s true their climb lacks all of the traditional juice that fuels most mountain-climbing tales (loss of life, limb or marriage), what they bring to the table is an action comedy that strives for deeper waters. In the process, it gives the audience a human version of the typical climbing experience: a mountain climbing story about and to inspire everyman/woman.

“We’re not really here to say you could be the next professional athlete,” said Largent. “We’re here to say that that doesn’t matter. You can do more, you can get out there in whatever way that means for you, and it’s worth it. You’ll grow. It’ll make you a better person, and that will benefit the whole world.”

That message comes through loud and clear, in large part because it’s being conveyed to you not only by the people who actually made the climb, but by a group of talented actors who are as passionate about performance art as they are adventure. Largent, who also serves as artistic director and lead writer, taught theater at Arizona State University and Fort Lewis College. He holds an MFA in performance from Arizona State, which specializes in developing new work and might be where he perfected some of his incredible facial expressions. He uses these masterfully in each of the several roles he plays in the performance. As a matter of fact, all the actors wear many hats, an inside joke you’ll get when you see the play. Watching the characters “transform” so completely and convincingly is one of this play’s marvels.

And where would you see this kind of play? Why outside, of course! The theatrical play is styled for outdoor performance on a truck/stage custom built by the troupe. The fold out stage features a retractable climbing wall that simulates their climb to the peak. And here’s the thing, it’s all so convincing that you actually believe you are there.

Could Alex Honnold do that? 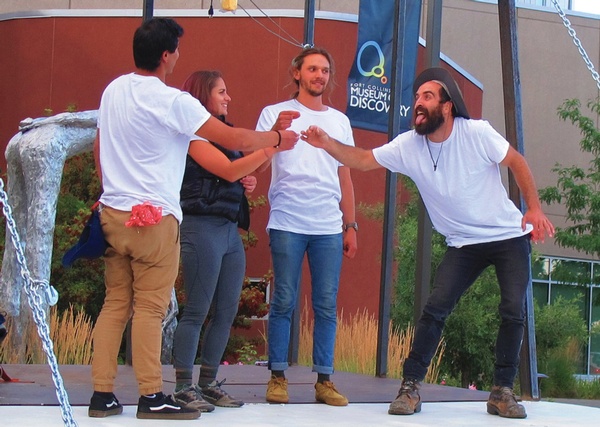 From left, Gustavo Palma, Sarah Grizzard, Theo Reitswiesner and Mike Largent, in a scene from "Lobuje." The play takes a humorous look at the human side of adventures, big and small./Courtesy photo