This is an article I never wanted to write, but with the epidemic of suicides in our area it only feels necessary to tell this story. I hope I tell it with compassion, and that it merely one person’s perspective on what is a tragic topic. It was written by a flawed man, with the intention that if it helps one person with depression/suicide it was worth writing.

When I was 20 years old, just before I made it out to Colorado, I was suicidal. It happened gradually, but a storm of doubt and negativity descended into my soul that summer of 1999. For years I’d kept that secret, I thought it was something that very few people dealt with. Little did I know how wrong I was, and how common it is to feel helpless, like ending it all is the answer. 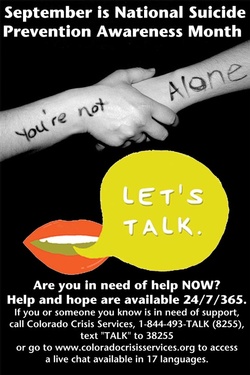 If I can be honest, and that is my job here, I have grown somewhat numb to the suffering of others. Every day someone goes on trial for murder. Every morning I check the news to learn of the misfortune of others, to tragedies that now seem normal, and to the suicide and drug epidemics plaguing our nation.

As a writer, I am equally powerless and powerful. I can’t change an unjust law or who is president, but I do have the power to move the hearts of people and change their lives. I know because other writers, like Martin Luther King Jr. and Jack Kerouac have changed my own life. And that is why, now, finally I need to write about suicide.

At 38 I’m blessed with the voice in my head that says, “If I knew then what I knew now.” When I was 20, I couldn’t find any light. It was mostly darkness, and I never told a soul I was depressed. However, I think that in order to really know what depression is like, one must also understand happiness.

I guess suicide and depression runs in my veins. My great-grandfather killed himself with a shotgun out in the field. He was a farmer, but he didn’t want to be. I don’t know much more about him, other than as a result of that incident, my grandmother instilled a fear of guns in my mother, and my mother kept me away from guns.

The biggest thing I would have told 20-year-old me, is that hard times pass. Depression and most mental disorders can be properly treated. Things that you never think you’ll get over, you do. Really. Hard times and depression provide fuel for you once you get over them. Life is really f*ing hard,

and for this young generation, it’s even harder than it was for mine. You don’t get to be innocent for as long as you used to.

I finally was able to move on from feeling suicidal by getting out of my hometown and changing my lifestyle. It was a long, hard road, with stories enough to fill a book, but I moved from feeling suicidal to feeling that every day is precious. I feel like I’ve earned the right to say that, and I hope you take it to heart.

Severe depression only haunted me for a brief period of my life. I never, ever, thought it would end, but it did. Some people have to fight the fight their entire lives, and they have endured more than I have.

I’ve spent countless hours in my head thinking about suicide and being grateful I never tried anything stupid. The closest I came was falling asleep at the wheel multiple times when I was severely depressed. Luckily, especially for my family, death didn’t take me when I was willing to give up my life.

Life is going to be hard, and the best things in life are hard. The ones who get the most down are the ones who can soar the highest. I know the evil voice of despair and depression, and that voice is a god-damned liar.

Part of being alive for me means that any joy I feel has to be shared. And there’s a lot of happiness and joy to be had on this big ball of rock flying around space. Like that scene in “The Shawshank Redemption,” where Tim Robbins’ character escapes from prison: sometimes you gotta crawl through a river of shit to come out clean on the other side.