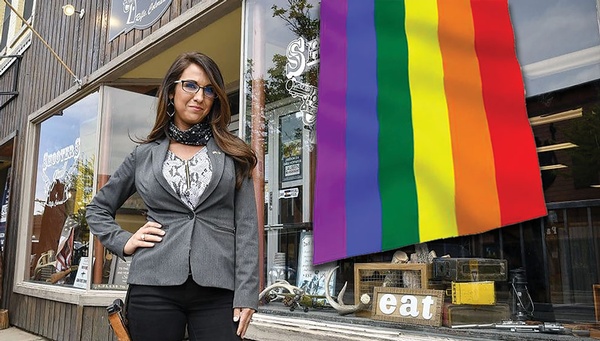 *This photo dramatization is for ironic illustration/entertainment purposes only. Lauren Boebert does not have a giant rainbow flag in front of her Shooter's Bar. Yet.

Sun’s out, guns out

It’s not often that I use this pulpit to air my personal agendas. OK, maybe it is. But this one’s legit. I want to use this platform to lay down the gauntlet, if you will. I want to challenge the woman who puts the “twit” in the Twittersphere, the West Slope’s very own Q-Anon darling, Rep. Lauren Boebert, to a gun fight. No – not with bullets and those funny leg strap things. But with armies – as in my right arm-y or my left arm-y, womano y womano (after discerning that we both meet the stringent definition, of course). That’s right, I’m talking a good old, all-American arm wrasslin’ match to settle differences, which include… well, pretty much everything.

Truth be told, this was not my brilliant idea, but that of someone who likes Boebert possibly as much as I do. And like any bad, half-assed, thoroughly unvetted and potentially disastrous idea, I’m totally game.

It’s all in good fun, of course – we could even serve Jell-O shots and pork sliders to add to the good times. And what better time to partake in this all-American spectacle than on the 4th of July? Preferably after the recitation of the Declaration of Independence but before the Lyle Lovett concert. Of course, it will have to occur outside working hours, since the leftist media never sleeps – or gets federal holidays off.

Anyway, this three-month cushion should give me plenty of time to Google “how to arm wrestle” and get back in the gym since letting my membership lapse during the “plandemic.” (They actually wanted us to wear masks and wipe down equipment with sanitizer. Tyranny, I tell you.) It will also give me time to track down Barry Bonds’ doctor for some uh, “supplements,” get a few get sweet stick-on tattoos of snakes and wolves and naked ladies, and maybe even shave my armpits.

Of course, like any good contest, there will need to be a wager. Which is why, if I win, Boebert will have to hang a giant rainbow flag outside Scooters, er Shooter’s Grill, in perpetuity (as in forever, and ever.) And if she loses, she has to hang a giant rainbow flag outside Shooter’s and maybe some Bob Marley and Grateful Dead tapestries inside, and put a veggie burger on the menu. She’ll also need to agree to a group hug with The Squad and lastly, get a tattoo of Anthony Fauci on the cheek of her choosing (right next to the one of Donald Trump).

If this seems a little lopsided, not to worry. If I get my ass kicked, I will have to suffer the abject humiliation of losing to someone who wears gold lamé pumps and acid-wash jeggings in total seriousness outside of Snowdown. “You’ll probably have to move out of town, maybe even the state,” a so-called friend offered. So, there’s that: public ostracization – that and I’ll have shaved my armpits for nothing.

Anyway, not to worry, Boebs. People have said I have wrists like a baby bird (a mediocre one at that) and they’ve seen better arms on a clock. I also have raging tennis elbows, dodgy shoulders and eyebags older than you. Although, true story, I almost did an entire pull-up once. Without the band. I also get plenty of an upper-body workout schlepping newspapers and having my arms pulled out of the sockets on a regular basis by my dogs, who think they’re competing in the Iditarod every time we go for a walk.

Plus, if you’re anywhere near as strong as your rhetoric, I think it’ll be a fairly even match. I mean, the way you accused Ketanji Brown Jackson, the first black female Supreme Court nominee in U.S. history (a subject learned in high school, but not important right now) of being a pedophile? Truly amazing!

Speaking of amazing, in my 30 years living on the West Slope, I never thought I’d actually miss Scott McInnis or Scott Tipton. But lately, I’ve been yearning for the bad old days, which I owe all to you. And let’s not forget the notoriety you have heaped on the Third Congressional District. Now, whenever I travel and tell someone where I live, they immediately recognize it as, “where Kookie Pants is from.” So thank you, for putting us on the map as the Land of Kookie Pants, even though I assure everyone we are not all as unbelievable as you are.

I mean, like how stumped everyone with your whole “Prince John” thing on Fox News. But I knew exactly where you were coming from. You were brilliantly referring to John John, who will return from the dead (or Vegas, where he’s rumored to be hanging out as an Elvis impersonator) to seat King Donald on his rightful golden USA throne (which is rumored to look a lot like the one in his NYC royal depository). As a show of gratitude, King Don will anoint John John as Prince John, and they will officiate many a late-night wedding followed by strip clubs and all-you-can-eat buffets. Duh.

Sure, by now, some of you may be saying, “Wait a minute. Missy has never even come close to doing a pull-up. This is April Fool’s Day bunk.” And, even more astuterer readers may see it for what it really is: fake news and a thinly veiled attempt to push critical space theory, the progressives’ openly subversive agenda to teach our children that the lunar landing was real.

But just in case this is all completely above board and Boebs and I really do throw down, I plan to swap out my arms at the last minute with ones from a dead guy, whose muscles are infused with code from China. And Bill Gates. So, I guess it’s a good thing I got the vaccine after all.

Like I said, Boebo, all in good fun. And maybe when we’re done, we can hang out and read some hilarious excerpts from your new book – hope there’s lots of pictures! – and shot gun a beer, no ammo required.