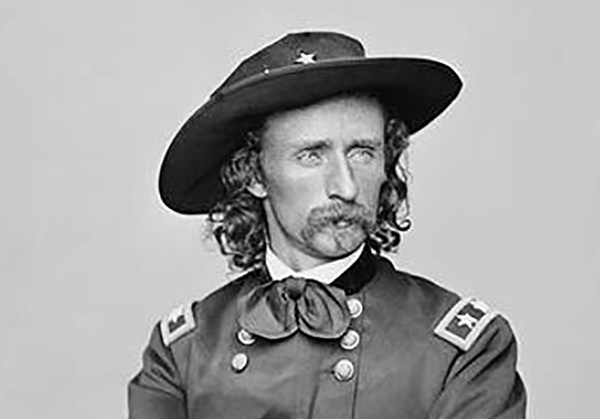 I’m staring at an illustration of an Indigenous person joyfully ramming long-stemmed flowers up General Custer’s butt. Or at least I like to think the blond mustachioed white man on all fours is Custer. Maybe I’m too optimistic, but in the painting it looks like he’s enjoying the flora-infused traffic jam behind him.

The same sense of subversive joy electrifies me when I read the writing of Stephen Graham Jones, who recently spoke at Fort Lewis College. The prolific Blackfeet writer knows how to craft top-notch horror stories, and after years of pen-to-paper devotion, he’s receiving righteous recognition for his Indigenous-centered horror novels. But it feels unfair to only see him as a horror writer. Similar to Monkman, Jones’ debut novel, “The Fast Red Road: A Plainsong,” playfully zigzags around different genres throughout its sprawling story, which reads like Cormac McCarthy’s “Blood Meridian” meets Hunter S. Thompson’s “Fear and Loathing in Las Vegas.”

Indigenous folks know how to confront those borders because we’ve studied them – sometimes by choice, sometimes by force – ever since they were put up to keep us corralled into reservations. Whether through art, writing or music, we take notes in the underground, studying the maps of bordertowns in order to burn them down.

Speaking of desecrating Custer, in Southern California circa 1978 a group of young Native American musicians revved up on rock ‘n’ roll and Indigenous liberation formed a band called Winterhawk. Fronted by outspoken Cree activist Nik Alexander, the group lasted long enough to record two albums before calling it quits in the mid-1980s. Though their lifespan was short and they never attained mainstream success, they managed to tour with an eclectic variety of artists, such as Tina Turner, Santana, Mötley Crüe and even an up-and-coming band called Metallica in 1980.

In an interview with Bandcamp writer Brad Sanders, Winterhawk’s original drummer Alfonso Kolb spoke fondly of the shows that made the band worthwhile: with enough smooth-talking, the band was able to play for Native youth in boarding schools around the country. “We would go to boarding schools and do seminar classes prior to the show,” Kolb recalled. “We would talk to these Indian kids from all over, different tribes, and the common thread that they were going through in their life was domestic violence, alcoholism, teen pregnancies, suicide, lack of education.”

Heavy metal was what kids wanted, the band argued, and using that music as a vehicle, they had a positive message to share.

For Winterhawk’s frontman Alexander, these gigs were the gold records the band sought. “You’ve gotta be good at your stuff, you’ve gotta practice,” Nik would tell the drummer, leading up to these shows. “Because when we go there, they’re going to be amazed at the way you drum and the way I play guitar. That’s what’s gonna take down the walls, and they’re gonna wanna talk to us, and that’s when we’ll get to hear their problems, because no one else is listening to them.”

There is something to be said about those moments, especially in your youth, when you encounter an artist whose words and music reach out through the stereo or from the stage – their crooked, crumpled hearts soothing your distress. Every beat becomes life support, every revolution per minute feels palpable; a reminder that another world is possible.

I like to believe that, after the band packed up its gear and hit the road, those Native children in attendance were left electrified with a sense of subversive joy to make them endure a little longer.

No archive exists chronicling these boarding school tours, and live footage of the band is hard to come by. But there is an eight-minute clip of the group playing in Seattle in 1980. The footage is warbled and grainy but you can see the band decked out in Native regalia with Alexander shredding in a vicious groove. The stage the band plays on can barely be called a stage, and from the camera’s angle, it looks as if only a handful of people are watching. And yet Winterhawk performs as if in a stadium, fully alive and floating above everything. Though unjustly brief, it is a performance that speaks to the confidence of knowing that no matter where they are, as Native people their home is everywhere on this stolen land.

Over the years, the band’s popularity has ebbed and flowed. Their music being hard to find certainly hasn’t helped sustain the legacy they deserve, but recently the independent label Don Giovanni Records took on the project of re-releasing the band’s discography. Their two full-length albums are now widely available on streaming platforms and CD (fingers crossed a vinyl re-issue happens to satisfy record dorks such as myself).

Listening to the band’s 1979 album, “Electric Warriors,” one might find it hard to believe it’s their debut release. The album is a pounding hurricane of sound: the musicianship is tight-knit and hyper-kinetic, and Alexander’s voice croons and wails as fluidly and beautifully as his guitar. The infusion of traditional chants backed by metal riffs, pow-wow drums and an attacking blues beat turn their bodies and instruments into weapons, which is perhaps why the album cover features band members poised in traditional regalia holding guitars like weapons. “Electric Warriors” captures the sound of 500 years of Indigenous armed love and, thanks to the efforts of the independents, it now floods speakers of the 21st century.

Among the many gems featured on this debut record, “Custer’s Dyin’” is a highlight for me: it’s KISS meets the American Indian Movement – a pummeling, yet groovy track about unsettling the settler state and having a fun time doing so. It is the soundtrack to toppling statues of racist mascots on a Saturday night.

In other words, 500 years have come and gone and for the most part, it has felt like sifting through 500 channels of broken treaties, banal violence and dehumanizing depictions of my black, brown and queer relatives.

If there is a heart to this country, it rests in those black and brown souls still miraculously alive, despite genocide, despite the chains. Innate to our kaleidoscopic cultures, we know how to laugh in the dark as a form of resilience – it lights the night, and like fireworks, we playfully explore and explode the liminal spaces of a crude country whose violent narrative has been shaped by the architects upholding the aperture of the white male gaze. Like Custer’s fate, that worldview is dimming, becoming outnumbered, and we are laughing while embracing the possibility of another world.