Steps in a new direction
Thoughts on what Bears Ears really means, as a place and home 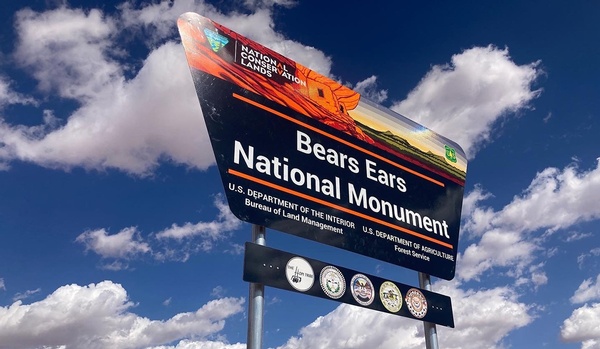 For the past five years, Bears Ears National Monument has become my de-facto home as I roam the Colorado Plateau foraging for stories and a sense of place. The first time I glanced up at a thoughtfully placed masonry wall embedded in a sandstone alcove, it was the dead of winter. I was homeless, living out of my beater Jeep Wrangler, encrusted with mud. Witnessing the ancestral home of Indigenous people who withstood a thousand years of winters like this brought my circumstances into perspective – this was not wilderness as Western culture defines it, but a place that Indigenous people called home, and still do.

In exchange for this epiphany – and a place to camp – I vowed I would learn as much as I could about Bears Ears, on foot and by talking to the diverse people connected to it, and then to help protect it with my words.

That was just after President Obama designated it in 2016, only for 85% of its protections to be removed by President Trump in 2017. Last year, President Biden made good on his vow to restore Bears Ears National Monument. Biden’s proclamation honored the original monument designation, while expanding its boundaries to 1.36 million acres.

Biden’s proclamation reestablished the Bears Ears Commission to collaboratively manage the monument with the Bureau of Land Management and the Forest Service. The commission is composed of tribal nations affiliated with Bears Ears: the Navajo Nation, Hopi Tribe, the Ute Indian Tribe, Ute Mountain Ute Tribe and the Pueblo of Zuni, which are unified in efforts to protect the sacred landscape known as ‘Bears Ears’ in each of their native languages.

On August 26, the Bears Ears Inter-Tribal Coalition, an advocacy organization composed of the same tribes as the Bears Ears Commission, released their recommended collaborative land management plan for the national monument. It outlines how the newly reestablished Bears Ears Commission will work with the BLM and Forest Service on management decisions of the monument. The 90-page document, which can be accessed online, is a historic and important step towards letting Indigenous people lead how their homelands are managed. While each tribe’s perspectives and suggestions are different, there is a common reverence for the entire environment within Bears Ears, not just the cliff dwellings and rock art that have become associated with this landscape in the news:

“To the Tribal Nations of the BEITC, the landscape is much more than just a natural realm to sustain the material needs of life. It is imbued with spiritual powers, and everything in the natural world – rocks, trees, animals, water, air, light, sound – has meaning and character. Cultural resources and natural resources are not two different categories in Native life. An individual depends on other living plants, animals and surrounding land to survive; thus, the natural resources gathered, hunted and walked on for survival become a cultural resource.”

The document affirms how an Indigenous perspective will benefit how all land and water is managed in the United States. Secretary Deb Haaland and the Department of the Interior affirmed this when earlier this month she released guidance for including Indigenous knowledge and perspectives to strengthen the role of tribal governments in federal land management. Secretary Haaland stated:

“From wildfire prevention to managing drought and famine, our ancestors have used nature-based approaches to coexist among our lands, waters, wildlife and their habitats for millennia. As communities continue to face the effects of climate change, Indigenous knowledge will benefit the Department’s efforts to bolster resilience and protect all communities … By acknowledging and empowering Tribes as partners in co-stewardship of our country’s lands and waters, every American will benefit from strengthened management of our federal land and resources.”

The entrance gates of U.S. national parks, national monuments and public lands are anchored to the legacies of racism and colonialism. The federal government stole Indigenous homelands under the noble intent of conservation and guise of protection. Parks were then, and still are, managed to cater to and benefit tourists and wealthy concessionaires. The romantic veil of conservation shrouds the dark side of public lands to this day, but these initiatives for tribal collaboration and stewardship are an opportunity to shape the future of how the U.S. manages and interacts with land, water and the environment moving forward. These landscapes have been Indigenous homelands since time immemorial and must be cared for and respected as such.

To support the work of the Bears Ears Inter-Tribal Coalition, consider downloading and reading the document. Likewise, the BLM has released their intent to prepare a new Resource Management Plan for Bears Ears National Monument. There are several public scoping meetings in the Four Corners to explain this process along with an open public comment period through Oct. 31. Letters from the public are an important opportunity to affirm we care about our neighbors and want them to lead how their homelands are managed.

Like voting, it feels like my civic duty to participate and voice concerns for how these lands are managed and protected and by whom. In these mercurial times of drought, disease, economic instability and political unrest, an opportunity like this is an antidote to despair and false hope. It is an actionable step in a new direction.

Portions of this op-ed are excerpted from Sjogren’s forthcoming book, Path of Light, which treks back through time as she retraces the 1920s expeditions led by Charles L. Bernheimer into the heart of Glen Canyon and Bears Ears National Monument. The book will be published by Torrey House Press in April 2023: https://www.torreyhouse.org/path-of-light