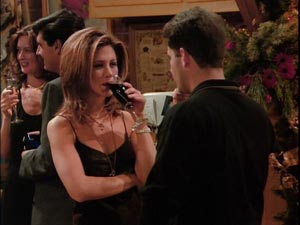 I’m notorious for missing meaningful occasions, like anniversaries, graduations, birthdays (meaning first birthdays, when people I’m responsible for are actually born). I don’t forget them, per se. I just don’t think in terms of calendar days. I’m starting to wonder if perhaps I run on a lunar calendar instead of a solar one. Like how Chinese New Year and Hanukkah fall on different days each year, can I start celebrating these things on my own time scale?

Did you know that “lunatic” and related words for crazy, like “loony,” actually derive from the Latin “luna” for moon? It’s where we get words like “lunar” as well. Crazy people were believed to be unduly influenced by the moon, much like werewolves and artists are today. I present all this information without commentary. But, by the power of juxtaposition, I suspect that the general consensus will be that, yup, you’re on your own lunar calendar.

So back in the early ’90s, a friend of mine dressed up as Oprah Winfrey for Halloween. I

guess technically this entailed making her skin brown with makeup. Does this constitute “black face,” and should I be worried pictures could surface of me standing next to her and ruin my career?

The short answer: Yes. That constitutes black face. Do you even have to ask that? Really? Your friend may have been looking to honor and celebrate Oprah rather than demean her, but even so, non-black people dolling themselves up as black people does not have a pleasant or flattering history. As for your career? You’re probably OK, so long as you didn’t dress that Halloween as a white-sheeted ghost.

I have developed a severe crush on a local radio personality. Her shows are must-listen programming for me, and I imagine us winning a pledge drive giveaway to some far-away exotic locale, like Telluride during festival season, and falling madly in love. She could read to me every night before bed, and I would be happy. Of course, I am afraid to learn anything else about her, like her age or her politics. But I did call in and request a song once. How can I either take a bold step or learn to let go of the fantasy?

Video killed the radio star, but you’re doing your weirdest, creepiest and oddly quite touching best to bring it back again. You’re not the first person to fall in love with a voice. I mean, whenever I hear Tom Waits (yeah, that Tom Waits), I feel like I found the power jet in the hot tub. But you’re entering stalkerish territory, my friend. Change your presets for a month, and see if your feelings simmer down, you loon.