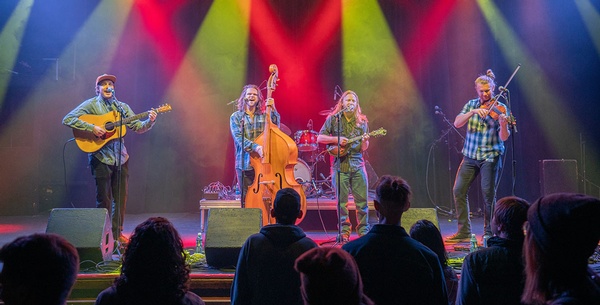 He’s a savvy graphic designer by day and a guitar-shredding, bass-playing machine by night. He is Charles Andrew Sackett Henry. Or better known as Charlie Henry. Or, how about Chuck Hank? Call him what you will, dear reader. The man is an absolutely wonderful human, and I recently had the pleasure of speaking with him minutes after he and his High Country Hustle bandmates graced the stage at this year’s Rhythms on the Rio in Del Norte.

Henry has been handling upright bass duties with High Country Hustle since its inception in 2017. And he also regularly performs lengthy genre-melting solo shows as Chuck Hank throughout the region. He is the kind of genre-defying, working musician who makes the Durango music scene as special as it is.

Let’s dive in. What brought you and your talents to Durango?

I grew up in Littleton. My brother started going to Fort Lewis in 2009, and I knew I wanted to go there and certainly to live in Durango. Durango is so special and has this amazing river valley energy. It’s rich in its culture and good music for a town its size.

What do you do to help pay the bills when you’re not shredding?

I’m a freelance graphic designer. My company is called El Matador Designs. I also work with J3 Designs. It’s mostly remote, mostly freelance, and it’s something that I can do on the road. In the band, we all need to find a road to make the dream happen.

Was there music from a young age that you knew you loved or saw yourself one day wanting to perform or be a piece of?

My parents were always really music-positive in our lives. We grew up listening to all sorts of music, and we always had a piano in the house. They weren’t really musicians themselves so much, but they loved music. I was really into rock and punk and metal. Later in high school, I started going to Red Rocks and diversifying genres. I loved dubstep and fusion jazz. The highest-quality form of any genre is so pleasing to me. I personally think some of the finest improvisational musicians in the world play bluegrass music. People think it’s simple. Like, “It’s just fast acoustic country.” But there’s a complexity in the simplicity that makes it so available for experimentation. I think bluegrass is jazz.

I think that music is such a unique kind of media. You can really combine genres and do whatever you want. It’s like cooking, where you decide on your ingredients, and then you add the spices and everything comes together. We are chefs, Stephen.

Absolutely! So, tell me about High Country Hustle. I feel like this band has kind of materialized out of the ether very recently.

2017 is when we all got together. I knew Andy Gallen from the dorms. We started going to FLC at the same time. I met Seth Yokel and Dennon Jones – they were a year or two after us shortly thereafter. We did jam a little bit, but everyone was in different projects. But, I bought an upright bass, because I had a little residency at Eno Wine Bar and wanted to play jazz and explore the upright. Seth and Andy found out and immediately wanted me to come jam. We started playing and found an awesome dobro player, Jeff Moorehead. And we eventually got Dennon on the project. Right now we play as a quartet, because Jeff had to drop out. More recently, we’ve been playing a lot more outside of Durango. There’s this diaspora of Durango people who have moved back to Denver post-college. So, when we play up there, all of our friends come out. Right now, we’re just trying to keep up with the momentum.

And you guys just released an album?

Yeah, it’s called “Weather the Storm.” It was released on June 24.

Where do people find the record?

You can find it on all streaming services, and we’re doing a run of vinyl as well. We’ll be setting up a store on the website or people can just grab one at the next show.

What’s on the horizon for you guys?

We’re looking forward to our big hometown throwdown Animas City Theatre gig on Sept. 9, that’s for sure. People We Know are opening up for us.

And we’ve started working on the next album. They take so long to produce, so it’s time to get going!

What advice do you have for other, perhaps less experienced, musicians in Durango and beyond?

Practice. And don’t just practice in your room. Get a little money together, and find a musical mentor. Someone who’s experienced and who can help you expand your musical horizons.

Also, expand your network. Go talk with people! Make friends with other people in other bands. Make friends, jam. That’s the greatest part of it all, honestly.