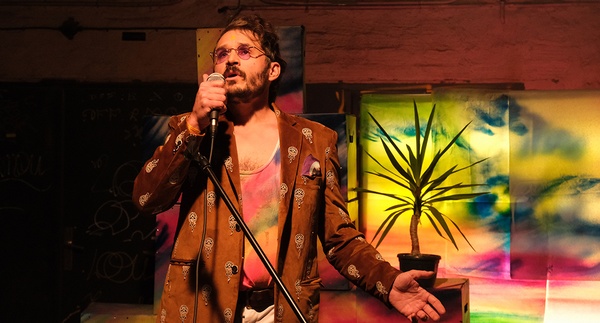 For this week’s Between the Beats, I sat down with musician Brett Patterson, Durango’s homegrown resident synthesizer wizard. Splitting his time between the U.S. and Germany affords Patterson a cultural dual-citizenship of sorts that serves as a deep wellspring of sonic inspiration. His musical project, The Brett, combines infectiously playful post-punk energy replete with warm, gooey analog synth soundscapes guaranteed to leave you clutching your heart and moving your feet.

At a recent show of his, I found myself in bliss as his soulful, psychedelic and highly danceable tunes washed over the unexpecting and surprisingly large audience. Do yourself a favor and put on his new record through Bandcamp as you read our conversation. Ladies and germs, please welcome Brett Patterson!

How did you first find your way to the piano?

When I was 9 years old, my grandfather moved a piano into our house, because mice were eating out the pads in the garage where it was being stored. My dad knew the first couple pages of “Moonlight Sonata” by Beethoven, and I picked that up from him. And, eventually from there, I went to college for classical piano in New York at two different music schools: Mannes at The New School and Aaron Copland School of Music at Queens College.

Tell us about the journey from classical piano to synthesizers. From the Steinway to the Prophet, so to speak.

Even though I was going pretty hard in the classical direction, I was always listening to a lot of popular music. During college, I started writing music, trying to find a voice. Classical music informed how I thought about music a lot with a very heavy theory background. In the Western music world, everything is based on chords. It was a bit of a journey to get away from some of the rules of that. Like the idea that some chords can only lead to certain chords. It all makes sense in the classical context, ideas of tension and resolving that tension.

When you are creating music now, what does your process look like?

I think, technically, it’s definitely from the classical background. Usually starting with an interesting bassline and some interesting harmonies. Where it breaks out of the classical world is not normally following the patterns of the classical world – throwing those rules out. And, the rhythm is the really interesting part, where you can delve into an infinite number of styles. There’s an album of Nigerian disco music that’s informed a lot of things for me. A lot of indie synth pop and rock, as well. I’ll use syncopation a lot.

Where would you like to see your music career go next?

The goal over the next few years is to play around the festival circuit in Berlin. I feel like that’s a great way to get started as someone who isn’t super known. There’s a little bit of scarcity of live music in that scene.

Yeah, live music is more of a unique thing over there. I’d like to play often enough that I can make a living doing it. Hopefully, the music will have some meaning to others. I love the idea of music as a way to make connections with others. There’s a band called Sheverb, and they have this idea of the slow roll tour that I really like. Instead of planning a tour over the course of a month and playing five shows a week in all of these different places, they’ll go to a place and stay there for a week, two weeks, three weeks and actually collaborate with other musicians and build community. It seems like a much more soulful approach.

Does the recent buzz about AI and its impact on artists of all stripes give you pause about making music as a livelihood?

I think the larger threat is our culture just not valuing art, really. There’s always going to be a market for live music. People are looking for human connection. To actually feel what the person on stage is feeling and have this really immediate connection that’s hard to find in daily life for some of us. That’s primarily how musicians make money these days, anyway. There’s not really money in recorded music for most of us.

Patterson’s most recent album “Creatures” is available at www.the-brett.bandcamp.com. And, follow his work on IG @thebrettmusic.