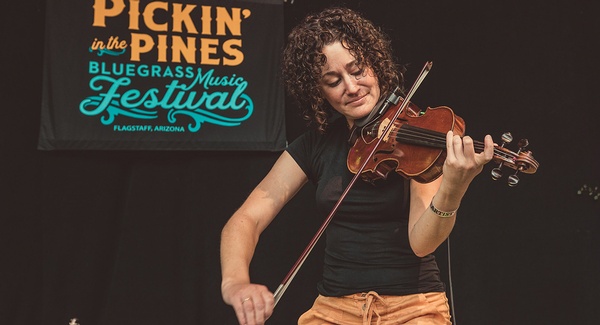 Once a self-proclaimed orchestra nerd and aspiring corporate boss, Alissa Wolf has torn off the shackles of musical stereotypes, high heels and pencil skirts to self-actualize into the mighty, badass fiddler (and artist at-large) for the Stillhouse Junkies that she is.

Not all of us have the guts to quit our day jobs and chase the dream – Wolf did – and she’s in it for the long haul. And, I do mean long. This year alone has seen month-long tours in Ireland, the U.K. and the Netherlands, with more than 78 straight days of touring in the U.S. on top of it.

By the grace of the fiddle gods, I was able to connect with Wolf in between her recent barn-burning performances at the International Bluegrass Music Awards and her sustained campaign of Western Slope fiddle groove on the East Coast. All roads lead back to Durango for Wolf and the Junkies, though, as they set their sights on Durango’s beloved Animas City Theatre for two nights Oct. 27-28.

What were you doing prior to forming Stillhouse Junkies?

I was living in D.C. working a corporate sales job, and I hated it. So, I quit and moved back to Durango. That’s when I met Ashley Edwards and Jesse Ogle of iAM Music. I started out just teaching music lessons, and within a year, I was writing grants and doing other things. I ended up working there as the executive director and was with the organization for about seven years.

When did you start playing violin?

I started Suzuki-based violin when I was 8. I played in orchestra all the way until I was 18.

What kind of orchestra kid are we talking about here, exactly?

I was a very serious violin kid. I was concertmaster at Durango High School my junior and senior year. It’s so dorky! I did go to college for music, but I dropped my music degree, because I was a little burned out. When I moved back to Durango in 2014, that’s when I started to figure out how to fiddle.

You’ve found a voice that’s very unique as a fiddler. Living in a small town like Durango, what is it that propels you forward as a musician?

I’m always on a journey of trying to get better and better. My bandmates inspire me so much. They’re the biggest part of what pushes me forward as a musician. Cody (Tinnin) getting me into old-time music has helped me understand groove. Fred (Kosak’s) songwriting is so incredible and has pushed me to new levels just through osmosis. Those guys play a huge role.

I’m constantly inspired. I know that the fiddle is a beast and takes a lifetime of playing. I still don’t know if there’s such a thing as mastering it. I feel like no matter what level you’re at, you’re always going to learn from someone. I don’t pass up an opportunity to jam, even when I’m really intimidated and embarrass the hell out of myself. We were in NYC for a couple days recently, so I reached out to Kenny Kosek. He’s played with everybody – Jerry Garcia, even. I emailed him and ended up going to his place on the Upper West Side. Sitting with him for an hour and a half gave me all of this stuff to work on. People want to pass on the knowledge, you just have to ask.

What is touring like? What are the things you’ve discovered along the way?

Touring is really hard, I’ll start with that. We went full throttle as a band, because all three of us want to do this full time and make a living at it. I really believe the only way to make a living as an artist is to push really, really hard. To get known well enough to get paid well enough to make it work. We have little breakthroughs, we can see we’re on the right trail. But, being on the road, you definitely have days where you’re like, “Whoa, this is hard! Is this worth it?” In my mind, it is.

It’s worth saying that one of the hardest things about touring life is that it’s hard to cultivate a personal life back home. An established partner, a home – it is doable. But, it’s hard when you’re always gone.

The Junkies played the Telluride Band Contests in 2018 and 2019. Tell us, what’s it like stepping on that big stage looking back in the canyon?

It’s thrilling! I don’t know if I’ve ever experienced that much adrenaline in my body at once, especially that first year. Getting to play the main stage was incredible. That first bass note that Cody played boomed out and echoed off the mountains, and that was a surreal moment for us. That’s a stage I’ve been watching since I was a kid.

Tell us about your hometown shows at the ACT? What’s in store for the Junkie faithful?

Some good energy! We had a huge summer, a huge year, and we’re ready to come home and celebrate the release of this album with our friends and family. It’s thrilling to travel around the country and the world to share our music, but there’s nothing more special than coming home and playing for the people we’re closest to. For us to finish the season with the people we love the most – and with High Country Hustle and Wood Belly – there’s gonna be some epic jams!