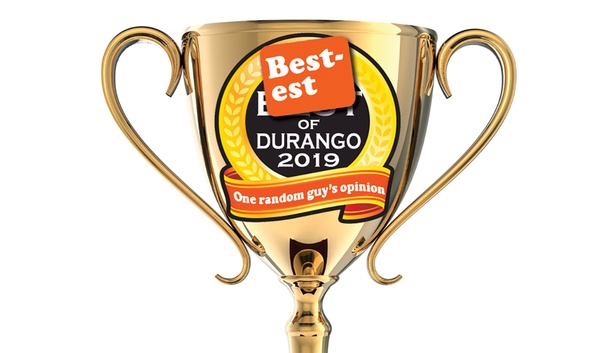 Look ... I’m not saying that the “Best of Durango” put on by the other paper in town is a venal advertorial. I’m not saying it’s a suspicious coincidence that all the winners are also advertisers, nor am I saying it’s weird that the vote tallies aren’t released. I’m not even saying that the results are bunk because Walmart always places, and I’m surely not saying the whole thing is a yearbook-esque popularity contest with no validity whatsoever. All I’m saying is that it sucks when important contests are omitted to make room for paid advertising because a few crucial best-of categories are always left out, and I’m saying that it might be time for a better “Best of Durango.” I mean, were they serious with the “best window coverings” category? Were there even enough window coverers in town to make for decent competition? Or what about “best casino” or “best title company?” Last I checked, there was only one casino in the county, and there was only one entrant for “best title company,” so the results weren’t surprising. And “best pharmacist?” Seriously? The best pharmacist is always the closest pharmacist, so there’s another category that could’ve been nixed to make room for more important ones.

Like, for instance, what about “Best Free Weekly Newspaper?” There are a couple in town, so if there’s room for a “Best Radio Station” award, which there was, why not give the written word some room to win? Or what about a “Best Best of Durango?” Given that “The Bestest of Durango” is obviously a thing now because you’re holding it, don’t you think we should get together as a community to decide which “Best of Durango” is the best? Well, I do, and that’s why I talked to all the people who matter before coming up with the results for the first-annual “Bestest of Durango.” So, without further ado, drumroll, please...

If you’re a Crestview resident who just choked on your chai tea before saying something like, “Crestview isn’t a trailer park,” you should reconsider. There is indeed a trailer park right in the middle of your neighborhood, and the fact that you won’t admit it is the reason you’re in second place this year. That, and it’s your attitude. There’s no keeping up with the Joneses in Animas, everybody is old and sweet and the opposite of pretentious, and it doesn’t feel like a puffy-coat cult here. Also, if you consider how close Oxbow is, and the fact that we have free cable/inter-net, Animas simply cannot be beat. Lastly, if you have an issue with this category’s inclusion in the Bestest of Durango, you need to reexamine your consumerist values. We’re all drawn to the minimalism and untethered lifestyle associated with stylish tiny houses, and we all watch the show on HGTV, but trailers are still taboo because we can’t get past stereotypes. Well, there’s a very comfortable trailer park community right here in Durango that just won a “Bestie,” so there.

1st Place: Ashley from Ken and Sue’s
Runner Up: That guy who looks like a soap opera star over at Nayarit It’s not that the bartender who won in the other publication doesn’t deserve it, but I wish apples would’ve been compared to apples. Ken and Sue’s is a much higher-volume establishment, so their bartenders have to pump out 6 trillion more drinks per hour than the other winner, and it’s impossible to put more drink in each drink than Ashley does. Every martini she’s ever poured came with a meniscus on top. And that guy from Nayarit came in second place for pretty much the same reason (that, and it’s gotten to the point wherein he simply hands me a salted Tecate when I walk in, which is unbelievably cool).

For the record, “Actual Garage Sales” would’ve won this category if they didn’t disappear in the snowy winter months, because the virtual version can get annoying. That group contains next-level trolls who can turn any post political (even the posts selling treadmills), and most of the people in that group have no idea how Facebook works. I mean, come on Karen, do you really not see how foolish you look when you accidentally use the autoreply “is this item still available” on an “ISO” post? Either way, the reason a “real” furniture store didn’t win is that there are brick-and-motor shops in this town charging $15,000 for a couch (you know, that thing your pets and kids will turn into a petri dish within a week). With that kind of money, you could buy a car or a vacant piece of land. And if you already have those things and think that a really nice couch could be worth $15K, you should get online and “ISO” a new perspective, because that money should go to charity, not to something that soaks up your farts while you watch TV.

1st Place: Town Plaza
Runner Up: The lot by McDonalds

In a land with a paucity of free parking and a plenitude of $25 parking tickets, Town Plaza is an oasis (as is all that gravel over by McDonalds). There are way too many shops around Town Plaza for effective policing, so you never get towed or ticketed, and depending on which side you use, it’s only a short walk to Ernie’s or to The Ranch. Thank you, Town Plaza, for all that you do.

Honestly. If you’re a dude who lives in Durango with a working man’s clothing budget, you’re screwed. You can either try to get lucky at a thrift shop, save for three months to buy a pair of socks, or drive to Farmington, which requires equal parts courage and hand sanitizer. Besides, Durango wasn’t once voted world’s worst dressed town for no reason. The word “best” implies “good,” and since there are no good options for men’s fashion, or really any fashionable men to speak of in Durango, nobody wins.

1st Place: The Squat Rack at the Rec Center
Runner Up: The Saturday Farmers Market

Again, this is another instance wherein second place could’ve been first if it didn’t disappear in the winter, because the Saturday Market has everything from vagrants to people walking on stilts, but the winner here really deserves it. If you stand by the left-most squat rack at the Rec Center, you can look down through the window into the pool or turn around to watch the entire fitness area. Everyone goes to the Rec Center, from tenants of our halfway house to the lords and ladies of the avenues; it’s a menagerie of humanity from which one can never look away.

You’re the bestest of the best of Durango, and we applaud you.