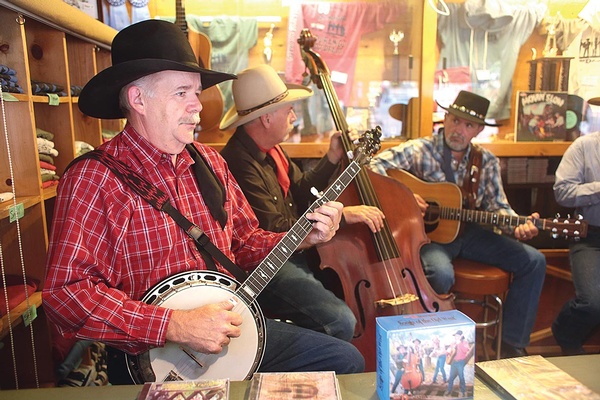 Bar D Wranglers, from left, Gary Cook, Joel Racheff, Richard Espinoza and Matt Palmer (not pictured) warm up the crowd in the gift shop before Tuesday night's performance at the Chuckwagon./Photo by Jennaye Derge

Back in 1967, Cy Scarborough, Big Jim Blanton and Buck Teeter had a vision: to start their own traditional chuckwagon supper, complete with traditional cowboy vittles, a riding stable and, of course, lots of Western music. The three came from the Flying W Ranch in Colorado Springs, where Scarborough had been performing since 1953. They searched far and wide across Colorado for the perfect location.

They found what they were looking for at the base of Missionary Ridge, north of Durango in the Animas Valley. Delmas Dalton owned a large cattle operation there and was a fan of cowboy music, so the trio presented him with a recording of their music. “We told him there would be no alcohol served, and we’d have real family entertainment,” Scarborough told the La Plata County Historic Society in a 2009 interview. Dalton agreed to sell Scarborough and his partners 10 acres at $400 per acre with no money down, and the rest is history.

“Cy roped off the area for the chuck-wagon, and they were able to open on June 2, 1969,” guitarist Gary Cook said. He joined the group in 1989 and hit his 30-year milestone with the Bar D Wranglers this year as the Bar D Chuckwagon Supper celebrates its 50th anniversary.

In light of the occasion, the Wranglers are pulling out all the stops this summer, with one big event already under their belts: Country Music Hall of Famer and part-time La Plata County resident Charlie Daniels did a sold-out show with them this past Monday. Their contemporaries, Riders in the Sky, will join them on Aug. 22 and 23. Ranger Doug, of Riders in the Sky, and Cook are frequent collaborators, having released an excellent album of jazz and western swing a couple years back called “Springtime in the Rockies.”

The current Wrangler lineup has been together for the past eight seasons. Fiddle player Matt Palmer joined in 2000, bassist and comedy vocalist Joel Racheff in 2006 and lead singer and rhythm guitarist Richard Espinoza in 2011. The 91-year-old Scarborough retired from the stage more than a decade ago but still works at the Bar D Ranch every day.

“From the construction through just last night, he was here, doing maintenance and coming up with ideas for us at the chuckwagon,” said Cook. Scarborough’s son Rick has managed the kitchen and grounds for decades, and grandson Andrew is now transitioning into that role.

Other than the “steak shack,” which was added as a way to give the chuck-wagon a boost in 2002 after the Missionary Ridge Fire, the menu has seen few changes through the decades. It’s a traditional cowboy supper of roast beef (or chicken), baked beans, baked potato, biscuits, chunky applesauce, old-fashioned spice cake and cowboy coffee or lemonade – served on a tin tray and in a tin cup, of course.

“With up to 700 guests each night, that’s a lot of biscuits, beans, applesauce and steaks,” Cook said.

The Bar D crowd is a diverse one, typically comprised of locals, tourists and aficionados of western chuckwagons – some of whom return every year, he said.

“One night, we had 26 foreign countries represented here,” said Cook. “There are always various bus tours and people vacationing and traveling through Durango.” The Wranglers have released countless albums through the decades on their own Frontier Records label, starting with 1973’s “The Wild and the Lonely,” which featured the original quartet of Scarborough, Teter, Big Jim Blanton and his son, Little Jim Blanton. The lineup changed a few years later to include yodeler Bob Minser, bass singer Jerry Baxter (best known as the announcer for the Grand Ole Opry) and fiddler Terry Morris.

Morris is the person who recruited Cook in the late ’80s, after they’d worked together on other projects. Cook had recently won a pair of National Flatpicking Championships and was looking for a full-time gig. “When I first moved here, I hoped it would turn into something like this,” he said. “I knew about the chuckwagon for several years. It’s been a great place to work, be around these guys and be part of the family.”

The Wranglers have played the Grand Ole Opry a few times – both the original Ryman Auditorium and the newer Opryhouse. “That is really a fun, lifetime dream. To walk out and stand in that circle that you always heard about ... if you only get to do that one time in your career, you’re very fortunate,” said Cook.

Although the Wranglers are locked down at the ranch from Memorial Day through Labor Day each summer, they augment that 100-plus day grind with limited touring and a handful of local dates like their annual holiday jubilee at the Community Concert Hall. One tour brought them to Japan to play for the troops at the opening of a U.S. Navy base.

Band members also have their own musical interests outside of the Wranglers, like Palmer’s excellent 2012 project, “Fiddlin’ Around,” which wrapped up all of his country, bluegrass, jazz and swing influences in a tidy, 14-song package. Racheff trades his doghouse bass for an acoustic guitar in the offseason and holds court each week at The Office Spiritorium.

Still, the chuckwagon is king in the Bar D universe, with each band member helping with maintenance, reservations and other year-round chores. Like any tourist-driven business, outside influences like the cost of gasoline or natural disasters can dictate crowd size.

Cook said attendance is down this year because of the 416 Fire, like most businesses in the area that rely on tourism. However, they’ve felt fortunate that they haven’t had to close, although there were a couple of evenings they stopped a little earlier than usual because of the smoke. “We’ve had loyal fans that still come out and support us,” he said. “Several generations have come through the Bar D. We’ve had proposals on stage. Being part of the community has been really important for the chuck-wagon.” 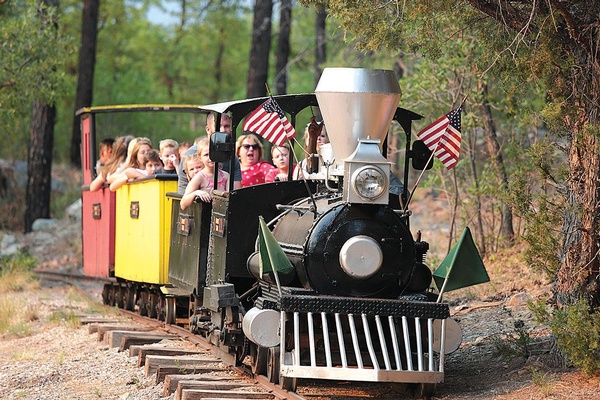 All aboard the area's other train attraction. Celebrating 50 years this summer, the Bar D is open nightly now through Labor Day./Photo by Jennaye Derge