A concerted effort
Community Concert Hall reaches for the stars 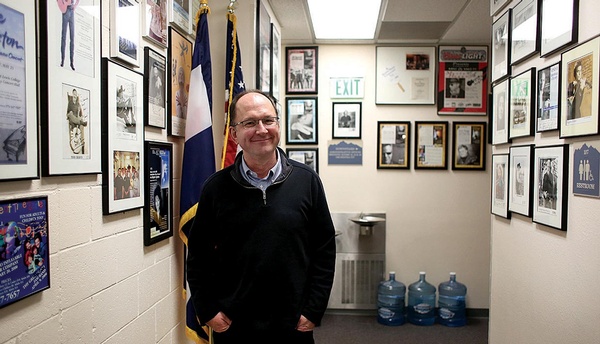 Concert Hall Director Charles Leslie stands in a hallway of posters from past performances at FLC./ Photo by Jennaye Derg

The winter of 1993-94 was wet and snowy with fluctuating temperatures, the kind of weather ripe for roof collapse, and that is precisely what happened to the Fine Arts Auditorium on the campus of Fort Lewis College (FLC). Fortunately, the cave-in occurred before the evening’s scheduled event, thus averting a major tragedy. It did, however, leave the college without a performance space.

Faculty and board members immediately recognized that the lack of an auditorium would have an impact on the college’s ability to fulfill its mission as a liberal arts college. As a result, they developed a plan with state and local officials to replace the auditorium with a first-class facility that would not only be available for college music performances, but community groups such as the San Juan Symphony, Music in the Mountains, and the Durango Choral Society.

Estimated to cost a minimum of $5 million, funding the construction was a major hurdle. However, tax incentives were made available for private donors through a Region 9 Economic Enterprise Zone designation. That, combined with additional support from the state and the college itself, turned the resulting fund drive into a success.

A Denver-based architecture firm, Klipp, Colussy, Jenks, Dubois, was selected to design the new facility; the same firm that had collaborated on the design of the Denver Central Library.

As work progressed, it attracted the public’s attention leading Barbara Conrad, then director of the Durango Arts Center, to remark, “The new concert hall will be a symbol of the community we have in the Southwest. It will be a symbol of what we love about this area.”

Indeed, the architects’ vision and plans for the cultural arts complex was to use native sandstone and other natural materials from the surrounding area. And three years after the ravages of winter destroyed the former auditorium, the 18,000-square-foot, 600-seat Community Concert Hall opened with great fanfare.

One mission of the Concert Hall, which also contains an orchestra pit, is to support artists who reflect the tastes of the region, while educating audiences about cultures and performing arts throughout the country and the world. True to that promise, a host of internationally recognized performers have stood in the Community Concert Hall’s foot lights.

Behind the stage, hallways are lined with posters and photographs of the performers who have played over the years. Names such as Kris Kristofferson, Merle Haggard, Willie Nelson, The Count Basie Orchestra, the Dave Brubeck Quartet, David Sedaris, the Aspen Ballet, and the Alvin Ailey Dance Co., to name just a few.

Concert Hall Director Charles Leslie has managed the venue and its bookings since Gary Pennington retired in 2008. Before taking the helm, Leslie had been a theatrical program director in Texas, Indiana and Washington state. After seeing an advertisement for the Community Concert Hall directorship, he applied, engaged in a telephone interview and was invited to meet with the search team. They immediately hit it off, and Leslie, captivated by Durango, gleefully accepted the position.

Growing up in Texas, Leslie was exposed to live theater at an early age by his musically accomplished parents. Mesmerized by sets and costumes, he admits to knowing, even then, that he wanted to somehow be involved in theater.

Leslie runs the Concert Hall with a staff of four full-timers and two part-timers, which includes three ticketing agents plus Technical Director LeeAnn Brubaker, a 16-year veteran of the Concert Hall.

Booking performers might seem like a dream job for the star struck, but it comes with enormous challenges, such as needing to schedule shows as much as two years in advance. Leslie works with booking agents, some of whom he has known for years, but he also pursues performers he believes are a good fit for Durango audiences. Conversely, choosing acts that appeal to the diverse age and demographics of our little mountain hamlet is, he says, like cutting a pie. “Each slice represents a certain genre of entertainment, but some slices are larger than others,” he says

Not everyone has the same taste in music or dance, or comedy, for that matter. The previously mentioned, well-known humorist Sedaris, filled every seat in the house, whereas a recent performance by co-median Hasan Minhaj, a Comedy Central regular, drew about two-thirds of capacity.

Although fund raising, particularly to cover expenses for big-name acts, is a major focus of Leslie’s job, a continuing challenge is just getting people up the hill to visit. Only a little more than a mile from Main Avenue – and offering ample parking, a comfortable venue with great lines of sight and national names – some locals have said they don’t go because they are not familiar with the campus.

Planning ahead is an essential element of Leslie’s job, but raising funds to keep it all functioning, is vital. Fortunately, he feels comfortable in the role and plans a major push in the future to develop resources and endowments. He is also hoping to upgrade the sound system and refurbish the lobby area and expects to showcase more artists from outside the United States. Coming up in September 2017, but still in the planning stage, will be the Community Concert Hall’s 20th anniversary.

Although he won’t be specific at this point, Leslie says a three-day celebration is in the works. It will probably be spectacular, but don’t wait until then, take the short ride up the hill and be entertained now; you’ll be back for an encore. 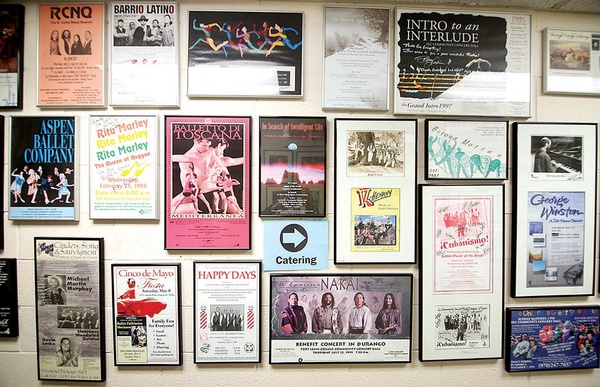 The Concert Hall's wall of fame. Since opening in 1997, the hall has hosted such names as Kris Kristofferson, Merle Haggard, The Count Basie Orchestra, Dave Brubeck Quartet and David Sedaris. Despite its small size, Durango's tastes are di- verse, and over the years Leslie has tried to cater to them all./Photo by Jennaye Derge