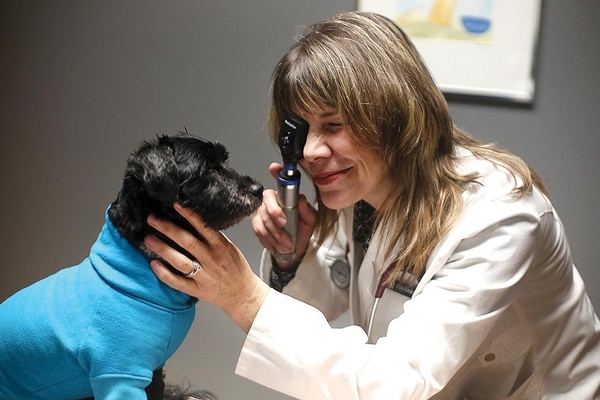 Suzanna Schroeder used to think it was cute when her English bulldog, Peaches, would snort or snore. But last spring when the 9-year- old dog started losing weight and spitting up unswallowed food, she rushed him to Riverview Animal Hospital. There, veterinarian Dr. Randy Hays found the snorting was a symptom of advanced brachycephalic syndrome, a condition that affects many short-nosed breeds and makes it difficult to breathe or swallow. He suggested Schroeder try spoon-feeding Peaches while holding his head up so food could enter his belly.

“I think it was about six months doing that three times a day,” she recalled. “It was fine, but he had no energy. He couldn’t breathe but he could swallow and he survived.”

Though Schroeder was willing to do whatever it took to keep Peaches alive, her concern grew when he started over- heating in summer and seemed to be suffering.

“It would be like breathing through a little tiny straw,” Schroeder explained. “He had a really hard time.”

Fortunately, Riverview had hired a new veterinary surgeon, Dr. Lynda Bernsteen, the only board-certified surgeon of her kind in town, who did surgery to help Peaches breathe.

“When I picked Peaches up at the end of the day, I could already tell he was better,” Schroeder said. “Now he runs and jumps around just like when he was 3 ... it absolutely saved his life.”

Dr. Shannon Mazur, managing veterinarian of Riverview Animal Hospital, said Durango has never had a board-certified veterinary surgeon before because there’s no 24-hour specialty clinic in town. She said “luck” brought Bernsteen – who has a DVM (doctor of veterinary medicine) as well as the
more stringent DACVS (diplomate, American College of Veterinary Surgeons) – to the community.
“Dr. Lynda is kind, hard-working, humble and an extremely talented surgeon,” Mazur said.

“She is able to provide advanced preventative surgery along with life-saving surgeries that would otherwise need referral to Albuquerque or Denver – in some cases, with travel being too risky for the pet. She is another gem that makes Durango such a special place.”

It was actually a combination of luck and love that brought Bernsteen to Durango. After a residency at University of California, Davis, and passing extensive examinations, she became certified as a Diplomate of the American College of Veterinary Surgery in 2001. She soon became the director of the Kidney Transplant Program at UC Davis, performing weekly kidney transplants on cats. Her mentor, Dr. Clare Gregory, was a pioneer in feline and canine renal transplantation. “We worked together a lot during that time, and did a lot of research projects and publications,” Bernsteen said.

“We developed a protocol for immunosuppression for dogs that seemed to work to help prevent rejection of the kidney. That’s when we started doing dog transplants as well.”

After nearly two decades in California working at the university and in private practice, Bernsteen moved back to her hometown of Rhinelander, Wisc., to support her mother after the death of her stepfather. While there, she reconnected with her college sweetheart and they got married.

“He said, ‘I’ve always wanted to live out West.’ I said, ‘I don’t mind that. I like the West.’ We had both been through Durango … and we moved out here,” she said.

She just happened to come across the Riverview job online. So far, she has been impressed with the practice’s response to her needs, such as acquiring the latest technology and the latest medications. Now, Riverview is trying to spread the word to regional animal hospitals that they no longer need to refer surgical patients outside the area. Bernsteen said she’s happy to discuss potential referral cases on a pro bono basis with local veterinarians. Some unusual surgeries she can perform include complex soft tissue surgery and reconstructive surgery. The procedures have intimidating names like “total ear canal ablation,” “diaphragmatic hernia repair” and “scrotal urethrostomy.”

Unlike a certain reporter who had to leave the room while Bernsteen performed a leg amputation on a dog with cancer, the surgeon is never squeamish. She grew up bringing home snakes, turtles, baby birds, rabbits and hamsters and playing with her terrier/miniature pinscher mix, Nicky; she knew she wanted to be a veterinarian by the time she was 7 years old.

Bernsteen decided to become a surgeon during veterinary school at the University of Wisconsin and hasn’t looked back because saving the lives of animals is an “honor.”

“It is a wonderful feeling to help that pet and help the people – it’s very rewarding. It’s what you hope for and work for and strive for every day,” she said. “Hopefully we can build this practice and help a lot of pets in this area who might otherwise have been put to sleep or are suffering because people can’t afford to go so far away.”

Durango resident Mary Hayashi is grateful to Bernsteen for saving the lives of both of her dogs, Tomi and Nikko. Within a few months of each other, the unrelated senior Labrador retrievers developed laryngeal paralysis, which makes it challenging to breathe.

“You could see Tomi trying to inhale and she couldn’t. You could see constriction around her ribs,” she said. “It’s scary because they can’t get air in or out … when they can’t breathe and they struggle like that, you don’t want them to suffer.”

That suffering ended after Bernsteen performed surgery on each dog. A year later, they’ve both bounced back. “It’s a pretty amazing,” Hayashi said. “Before, when we were up at the higher elevations, I couldn’t get them to walk maybe 30 feet and they’d start that wheezing and not being able to get air. Now they’re fine. Some mornings they’re outside and I can’t find them because they go on their little adventures on the property.” 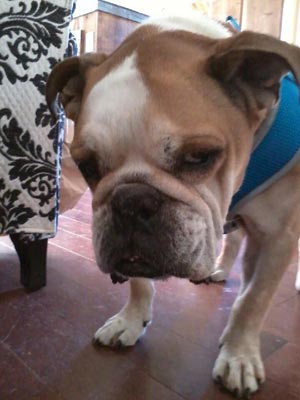 Peaches the bulldog, after surgery to correct his breathing./Courtesy photo