A date with the Don. Or was it Ron? 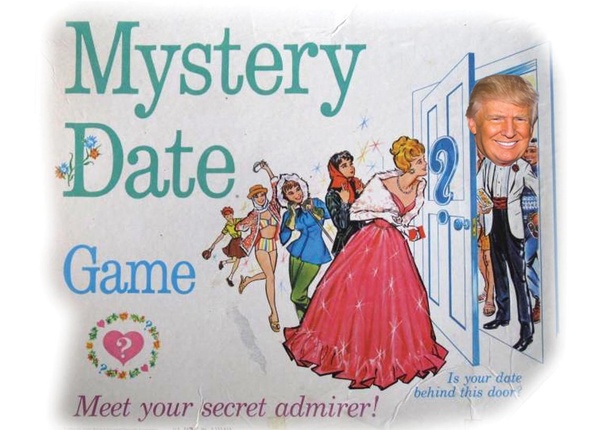 (*The following events are mostly fictitious with a good dose of poetic license, but surprisingly – and unfortunately – loosely based on real life. Names have been changed to protect the guilty.)

Last November, I threw in the “life towel” after my boyfriend and I broke up. I decided to stop putting on makeup, wear only clothes that resembled pajamas, and accept ice cream as a breakfast food. And then, only days later, the star of “The Apprentice” was elected our president.

My friends, understandably, became worried. They tried helping by plying me with beer and turning into personal cupids.

“Oh, Joe is single! You should meet him!” One friend gushed over drinks one night. “He’s back in town and lives nearby and is bored and wants someone to hang out with!”

But I still didn’t feel like being set up, mostly because I still didn’t want to put on makeup or my nice jeans. Fortunately, I soon found a place where nice jeans and showers were not required to meet members of the opposite sex. I discovered the virtual world of dating.

I scrolled around the websites awhile, only finding men around my age who seemed balanced and emotionally available – not my type of guy, judging by my dating history.

Then I came upon a profile that was more to my liking. “POTUS” was his name (*OK, not his real name. We’re trying to protect people’s dating reputations here. But due to his striking similarity to certain political leaders, just go with it.) Plus, he checked all the boxes: older, angry and so busy with his career that he didn’t have time for me, or anyone else for that matter.

His TinderBumbleMatchOkCupididledee profile sounded great. He seemed driven and knew how to get what he wanted. His “likes” were being important, frowning and having a lot of money; his dislikes were taking “no” for an answer and not getting what he wants. He was a divorced dad, which is totally my thing, and was really into building stuff, which is a huge turn on for every girl.

“Hey POTUS, your profile sounds really interesting!” I said in a message. “If you’d ever want to hang out, message me!”

It was 3 a.m., and he immediately responded. Perhaps that should’ve been my first clue.

“Hey grabbable woman, I also love covfefe. I’d love to get dinner sometime and tell you how I’ve become such a really, really, great and important person. I’m really incredible. You should see my tie collection.”

So we set up a time to meet at a local brewery, and when I arrived my usual 10-15 minutes late, I looked around until I spotted a single gentleman sitting at the bar talking on his phone and fixing his hair in the reflection of the window. I walked slowly toward him, trying to figure out if it was indeed the man from Tinderbumblematchokcupididledee, for he looked nothing like his profile picture.

As I got closer, he turned and made eye contact. He recognized me because I actually look like my profile picture. Still talking on the phone, he pointed at the phone and mouthed “just a minute.” I waved an understanding hand and mouthed back “no problem.”

He paused, and I wondered who “babe” was.

“Oh, baby, don’t worry! You know I would sleep with you. You’re one in a million,” he cooed.

He finally said bye to his mistress and turned toward me. “Sorry, that was just my daughter, she’s having some business problems,” POTUS explained. “You know, you remind me a lot of my daughter, and my ex-wife,” he said, sizing me up.

He, on the other hand, looked nothing like anyone I knew or anything I’d ever seen. His Tinderbumblematchokcupididledee photo was obviously not the handsome gentleman I swiped. But maybe he had a great personality, I reasoned. After all, with enough beer anyone can have a great personality.

“Can I get you guys some beer?” the bartender asked right in the nick of time.

“She’ll have a burger and a beer,” POTUS said to the bartender. “And I’ll have a salad and water.”

He sniffled and turned away from the bartender,

brushing him off to retrieve our beverages. “So tell me about yourself. I have a bigly

house,” POTUS said in one breath. “You must rent. You look like you rent.”

“Yeah, I rent. It’s so expensive to buy here,” I replied.

“No,” I sheepishly replied.

My bartender placed my beer in front of me and I guzzled.

“OK, I’ll look into it,” I stammered before changing the subject. “So, tell me about your kids.”

“Oh my daughter, she’s a 10, and she owns a really great company. This company is the best

“AMERICA!!!” he yelled, and then continued: “‘POTUS’ is what is known in America as a ‘nickname.’ Nicknames are what make American names great again!”

POTUS looked at me confused, like I should be more excited by all the greatness. He pursed his lips, squinted, snapped his fingers at the bartender for the check and began to get up to leave.

“Well, this was really, really, really, great. I’m really great. I’m the greatest, millions of people gather in my presence, and my hands are yuge,” he said as he put on his jacket and checked out his reflection again. “I’ll send you a text message if I ever have the time to see you again. I have the best text messages. Many people call them ‘Tweets’ but my text messages are received and read by 500 billion million people.”

“OK, bye,” I said, confused but also a little relieved.

As he walked out the door, he turned around, the wind folding his hair over in the wrong direction, his spray tan glowing in the florescent light. He squinted into my eyes, and with pursed lips and furrowed brow said, “Don’t worry about me, my hands are yuge.”

And then he walked out of my life forever.