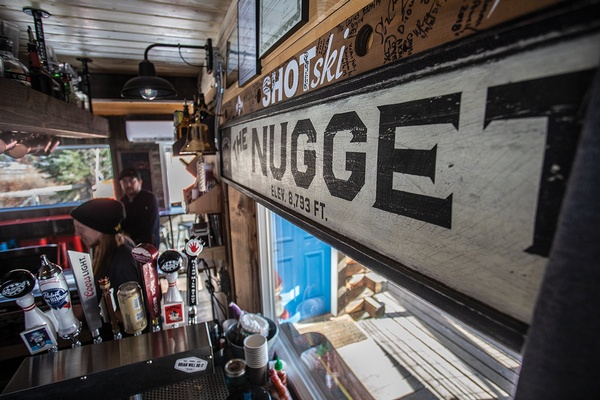 The vacation-rental-turned-bar, The Nugget, opened Dec. 2 after a whirlwind remodel. The bar serves all Colorado brews (and PBR) and food from the Backcountry Gourmet food truck, parked outside./Photo by Stephen Eginoire

Typically, “north county” and “night life” are two phrases not uttered in the same sentence, unless, of course, one is referring to the resident deer population.

But now, high-country revelers and thirsty adventurers north of Shalona have a reason to rejoice. There’s a brand new option for bellying up and rehashing the day’s epic feats on the slopes, singletrack and scenic byways.

Say hello to The Nugget.

Chances are, you’ve passed this once-nondescript log cabin, tucked in the trees south of Purgatory’s Gelande lot, many times. Maybe you even stayed there once or twice during its vacation rental heyday. But after an extensive and whirlwind renovation this fall, the 821-square foot abode was reborn as north La Plata County’s newest – and according to our calculations, second – apres watering hole. (The OG, the venerable Olde School House, of course needs no ,introduction. But we’ll do it anyway lest it’s been a while since class was in session. Arguably, Purgy’s and Sow’s Ear could also be on this short list, so we’ll give them a shout out too, even though we’re pretty sure they don’t have shot skis.)

Ironically enough, the idea to reinvent The Nugget as a bar happened – you guessed it – over drinks.

Wright, the father of two daughters, ages 2 and 5, moved to Durango two years ago from San Diego. His story is similar to many – with young kids, he was looking to escape city life for something a little more family friendly. He owned land in Durango and had visited the area many times, first as a college student in Albuquerque at UNM and later during regular ski trips.

“We came here quite often,” he said, reminiscing of his college stays at the former Red Lion hotel downtown.

After leaving the ocean behind, Wright and his family settled in the Animas Valley, and he bought the property where The Nugget is located. He spiffed up the interior and rented it out to vacationers for two years. At the same time, he also went through the county permitting process to add two more vacation rentals on the property. And that’s when it sunk in. These people – not to mention ones staying nearby at the resort and surrounding neighborhoods – needed somewhere close by to eat and drink.

“It seemed like an unfulfilled window in the market,” he said.

To help fill that window, Wright and his business partner (and UNM buddy) Joe Valerio began an epic and heroic renovation that started Sept. 30.

“We moved everything out and completely demolished the interior,” said Wright. “We worked 14-hour days for two months.”

With the help of local builder Brian Anderson, of 9318 Construction, they opened their doors Dec. 2. While completely new, The Nugget will be instantly familiar to aficionados of classic ski country drinking establishments. There are plenty of nods to the golden era of ski bumming – reclaimed wood from the old fence out front, a plethora of long, straight skis, a 70s-inspired logo, antlers galore and yes, the requisite shot ski. But there are modern comforts, too, including several big screen TVs (equipped with NFL Ticket), cozy leather couches and barstools that beckon you to stay awhile, expansive mountain views and a well-appointed rustic chic de?cor (if that’s a thing).

But rest your worried, dirtbagging minds – there is not a stuffy, uptight bone in the place. We’re pretty sure that’s impossible with $2 drafts of PBR on tap. All. The. Time. (No – not a typo. We warned them that divulging this publicly could result in a thirsty mob, but they insisted.)

Keeping things downhome and on the down low was exactly what the owners had in mind with The Nugget.

“Our concept was to create a community feel,” said Wright.

To that end, the bar is square instead of linear, giving folks a chance to chat with neighbors on all sides

In addition, the high-tops along the perimeter of the space face the interior as well, adding to the communal vibe. Upstairs in the loft, there’s one long table that overlooks the main floor, adding to the open feel.

“In other bars, you have your back to the door,” said Wright. “We wanted to make it feel really welcome.”

Plans call for upgrading the exterior space come spring thaw, adding gas firepits and lawn games. “So many families travel through here in the summer, we wanted to give them a place where the kids can run around and you can bring the dog,” Wright said.

And if all this talk of PBRS and lawn games is making you hungry, that’s where the adjacent Backcountry Gourmet food truck comes in. The Nugget location is the second for Backcountry Gourmet, which has gained a cultlike following for its sliders and burritos at 11th Street Station in downtown Durango. Best of all, the food truck and bar open at noon just in time for the lunch crowd – which has been quite brisk so far.

“For some people, it’s too expensive to eat at the mountain, and the School House doesn’t open till later,” said Wright. “We appreciate (Backcountry Gourmet) taking a chance and coming up here.”

(And speaking of the mountain, as of now, there is no sanctioned direct route between Purgatory and The Nugget, although rumor has it that a few enterprising souls have made the harrowing, and likely illegal, ski-in, ski-out trek. Do not try this unless you have a death wish.)

Another perk to The Nugget’s offerings is the Nugget shuttle – the brightly bedecked Suburban often docked near the bar’s entrance. According to Wright, it’s available for free on weekends and holidays to anyone within a 5-mile radius (sorry, that does not include town, but nice try.) Wright sees it as a way to get more folks out of their condos or rentals and enjoying the north county’s attractions.

“If I was new here and didn’t know where to go, I’d probably just end up sitting in my condo, but that’s not fun,” he said.

But more so than visitors, The Nugget strives to cater to the locals – the folks who live, work and play in the north county. And by hiring local workers and contractors, they also hope to infuse some life into the area’s economy.

So far, the plan seems to be working, as evidenced by the packed parking lot most afternoons. Wright said many patrons walk in with stories and memories of the old place, which according to north county legend, was built along the highway, near Electra Lake, in 1969. As the story goes, it was bought from CDOT – which needed to move the cabin to widen the road – for $1 sometime in the 1980s and moved to its current location.

“It’s like an icon,” said Wright. “We get a lot of people walking in and saying they once stayed here or partied here and have great stories.”

In addition, on the bar’s opening day, a local band (People We Know) stopped by for an impromptu performance, and Buck’s  Livery showed up with its horse-drawn sleigh. There was even a longtime local (who goes by the name “Andy” – you would know him if you lived up there) who had his birthday party at the new space.

“Everyone has been so welcoming,” said Wright. “We made it as a locals hangout. It’s a great place.”

Added Valerio, “It’s been a lot of smiles and a lot of good conversations.” 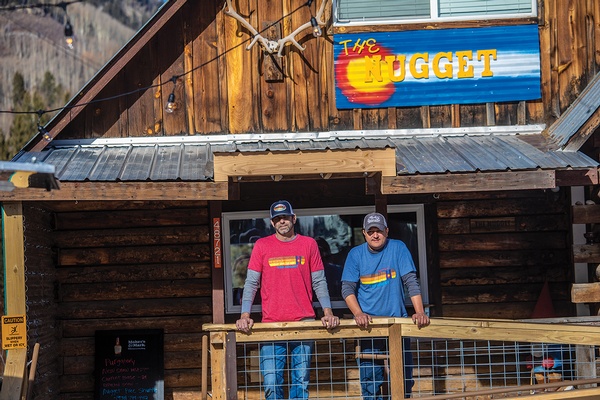 Nugget owners Kevin Wright, left, and Joe Valerio, right, sport some of their bar-wear outside the bar earlier this week./Photo by Stephen Eginoire