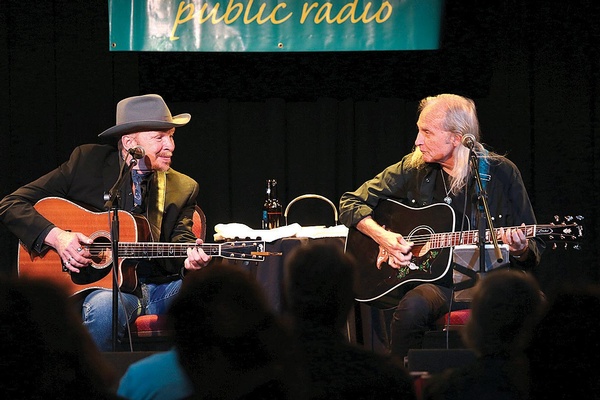 Alvin, left, and Gilmore play the Strater on March 22./ Photo by Jennaye Derge

Jimmie Dale Gilmore is a musician who leaves no trace. He’s here and then he’s gone, and nobody knows exactly why they feel so good.

Gilmore played last Wed., March 22, at the Henry Strater Theatre to a house full of devotees from before generations had names. He’s 71 years old, a sea sprite who dives deep, unseen by the tourists but admired by experienced divers far and wide.

He started out as a kid from the dusty flatlands of the Texas panhandle, as did Joe Ely and Butch Hancock. The three rehearsed enough to get good and launched The Flatlanders in 1972.

Gilmore’s first public appearance with The Flatlanders was that same year, at the inaugural Kerrville Folk Festival, northwest of San Antonio, where he won the New Folk Singer/Songwriter Competition. As is the case being in the right place at the right time, good things happened, and The Flatlanders were invited to make an album at the famed Sun Studios in Memphis. A single was needed to generate interest among radio stations, and Gilmore’s song “Dallas” (one of his most enduring) was chosen. It didn’t hit, and the whole venture was a commercial failure. The planned album, “All American Music,” was diminished to a limited run on 8-track tape in order to fulfill contractual obligations, and the vision went dark.

Following that inauspicious start, Gilmore sequestered himself for most of the ’70s at an ashram near Denver studying with an Indian guru. “I basically managed to break my own heart,” he confessed.

Revived and renewed, Gilmore, in a flip of a coin, left for Austin for a go at a solo career. His first solo album, “Fair and Square,” was released in 1988 by Oakland’s HighTone Records. Unfortunately, the venerable HighTone closed its doors and sold its extensive catalog just after Gilmore made a namesake album for the label.

He moved to Elektra in 1991, where he stayed through 1996, making three albums and watching his “Spinning Around the Sun” collection secure a place in the alt country niche. In all, Gilmore has recorded eight solo albums for four record labels.

In more mainstream circles, he has appeared on “The Tonight Show” with Jay Leno, “The Late Show” with David Letterman, Garrison Keillor’s “A Prairie Home Companion” and “Fresh Air” with Terry Gross. He’s inclined to call his music “heirloom music,” a moniker he adopted while playing with The Wronglers, a blue-grass band out of San Francisco.

The truth is, Gilmore doesn’t know what to call his music, and neither does the music industry that speaks reverently of him but doesn’t call.

In his late 40s, Gilmore (who is now 71) was named Rolling Stone’s “Country Artist of the Year” three years straight, and in 1989 he received a Grammy nomination for “Best Contemporary Folk Artist.” Nicholas Dawidoff of the New York Times once wrote, “Jimmie Dale Gilmore’s voice would make even Hank Williams cry.”

Go figure – Nashville showed little interest in Gilmore’s brand of intellectual country. Nevertheless, he continued to earn the praise of critics and fell into the unenviable position of cult idol, playing small clubs and festivals – almost famous, with a record in every country fan’s collection and a lyric in every country performer’s kit.

“In my music, what’s going on is a recognition and appreciation of the ineffable,” Gilmore told Rolling Stone in 1994.

“With my voice, I’ll still never be categorized outside of country. But the things I’m most interested in are the least common themes in country music.”

In 1999, Neil Strauss wrote of Gilmore in the New York Times: “Tall, reedy, pale and delicate with a long flowing mane of unkempt hair, he resembled a dandelion stalk whose seeds, with one puff, could be scattered to the wind. His voice resembled a plucked, trembling high-tension wire, his guitar picking was light and tentative, and his stage patter was full of endearing, unsure self-analysis. But though his sensitivity may seem like weakness on the surface, it became powerful when Gilmore applied it to songs that search for the dividing line between, to quote his lyric, ‘the being and the meaning.’”

Gilmore’s voice is distinctive, a gossamer emanating around him and not from him. “It’s his way of capturing wandering spirits, focusing them, and casting them out to ramble through the room,” wrote Lindy Payne in Seattle’s BackBeat.

There is just no one like him, and the reverent crowd at the Hank got a taste of the flavor they’d come for, but alas left hungry. L.A. rocker Dave Alvin of “The Blasters” shared the stage with Gilmore. Only a two-month touring association at this point, Alvin dominated the night with his brutish guitar playing, hoarse voice and facetious chatter.

In my opinion, Gilmore is too precious to share the stage with Alvin, notwithstanding how good and influential The Blasters were to Rockabilly and how enthusiastic his fans were. But in the end, his playing proved to be mush without a drum set, saxophones and Dave’s brother Phil backing him up.