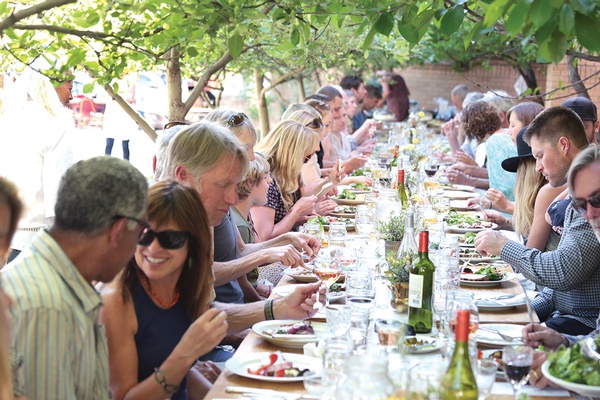 It might be impossible for people to be angry at each other while sharing a meal. Not to say folks don’t hash things out over dinner, but it’s just a little more difficult to have rabid animosity between bites of spaghetti or with tomato sauce on one’s shirt. Maybe this is why more and more, Durango is setting the table for community dinners as a way to bring people together – be it neighbors, acquaintances or total strangers. The idea is to foster polite discourse, find common ground and shared interests, or maybe once and for all, learn the name of that neighbor you always wave to from afar. And whether the dinners are tackling the thorny social issues of the day or just celebrating the local bounty, here are a few we’d like to give a toast to:

Elsa Jagniecki has always had a flare for design. As the owner of Heirlooms, a wedding and event-planning service,
she’s been practicing the art of bringing people together over fancy plates and four-course meals for years. Earlier this summer, she decided to gather a few guests around a familystyle table for dinner, conversation and drink – but with a twist. She kept the al fresco dinner’s location top secret until 24 hours beforehand, with the dinner essentially “popping up” in a picturesque locale.

Riding on the success of her first dinner, she now hosts them monthly, with hopes to run through October. They are not only classy affairs, but also have the intended purpose to connect attendees to the heart of our community. This might mean buying produce and hiring new or local caterers, or popping up in the middle of unexpected places to expose folks to something new.

“This is the epitome of what we’re all doing, we’re part of this movement to get people to look local and get off Amazon, get off our phones and the internet, and just go out around town and support people who live in the community and are part of this fabric,” said Jagniecki of the new but seemingly growing trend.

Gather is meant to support the community as a whole. “It’s all about slow money – everything I do, in the background of what I do is supporting everyone involved,” she said.

Jagniecki partners with many food, drink and ambience purveyors around town, but Carol Clark, with Toast Mobile Lounge, and Emily Lloyd, with Violet Mae Vintage, are her go-to gals for drinks and vintage lounge furniture for folks to relax upon.

At the end of the night, though, it’s not about the pretty setups or the delicious cocktails and food (OK, maybe a little). It’s about the deep sense of connection and community that the dinners stir up.

“The beauty in what I do that keeps me going is about creating and holding space for process to happen – connection, ideas, art – with no expectations and pressure,” Jagniecki said. “It’s open and safe.”

She said she tries to collaborate with anyone willing to partner, which includes popping up in unique and unusual places, such as recently at the Animas City Farmers Market.

“You never know how it’s going to turn out, and we’re just testing it as it goes,” she said. “But watching it come alive gives me goosebumps. It’s like a living, breathing art installation, and it’s beautiful.”

Gather Pop-up Dinners will continue monthly through October. For info. or to get tickets, visit, www.heirlooms durango.com or brownpapertickets.com.

One of the newest dinner concepts making its mark on local tables is the Jeffersonian Dinner.

Thomas Jefferson is a controversial lad indeed, but no one can deny his important role in history and also his great taste in dining. Back in his day, he was known for lavish meals and using them as a tool for mediation amongst bickering colleagues. He would sit everyone down to hash out their differences over meat and potatoes. Perhaps, in some way or another, this is why our nation is what it is today. Or not – but no doubt ending conflict amicably and respectfully has shaped our history and is always worth revisiting.

The idea for Jeffersonian Dinners came from Jefferson’s home state of Virginia and a man named Jeffrey Walker who, besides having a similar name to Jefferson, loves the art of conversation. He jotted down some rules for what he imagined a dinner with Jefferson would be like: eight to 15 guests around a table, but no individual conversations would be allowed. Rather, talk should be pointed toward the whole group on one overarching subject. Once the dinner starts, a mediator initiates that topic, which is then sent around the table for comment. Guests are allowed to chime in and ask questions out of turn, but the general rule is to engage in others’ responses and listen intently. Subjects are open, but the original Jeffersonian Dinners were meant to tackle touchy or sensitive topics in an effort to bridge divides and find common ground.

And common ground is how Durango’s Jeffersonian Dinners came to be. Durangoans Joy Martin and Colleen O’Brien met for the first time at the Mountain Venture Summit in Telluride and decided to come up with a way for residents to confront issues and affect change on a grassroots level.

“You can change the fabric of your community by getting people to sit around a table in a non-confrontational place,” Martin said. “They know they can be heard and it’s safe, and you can talk about hard issues.”

Or, keep it on the lighter side as the Durango Jeffersonian Dinners have. So far, topics have included “What is art?” and “What does community mean to you?”

“I want people to walk away from those experiences feeling hopeful, uplifted and encouraged by the fact that there are other people in the community that are passionate about connecting and building a dream place to live,” Martin said.

There is absolutely nothing wrong with keeping it light – after all, that is what any healthy community needs: a space to air thoughts, ideas and opinions without starting a yelling match. The feeling of community and connection is a fortunate byproduct, paving the way for the harder questions to come later.

Another offshoot is to leave not only as friends but also to have folks spread the idea to their own part of the world.

After attending a Durango Jeffersonian Dinner, Erin Murphy decided to host a potluck of her own for her Animas City neighbors. The guests included a few people she knew as well as people she had only passed on her way to work or on evening walks.

“It’s supposed to be an organic process ... and it’ s not intended to be exclusive, it’s intended to grow,” Murphy said.

To find out more about Jeffersonian Dinners or get ideas about hosting your own, check out Walker’s TED talk on YouTube.

Humans celebrate nearly everything – love, birth, leprechauns, cupid – so there’s no reason not to also celebrate food. It is, after all, one of the great common denominators.

Each fall, folks would gather at Cyprus to eat, drink and celebrate local food and farmers.

“It was just a big party, and it wasn’t about making money but about getting together to eat good food and have a lot of fun,” Dance said.

The concept was a hit, and when Ore House owner Ryan Lowe caught wind, he approached Dance with a proposition for a community dinner that would benefit not only foodies, but local nonprofits as well.

Durango’s first Harvest Dinner hit the Smiley Building lawn three years ago as a collaboration between Dance, Lowe and Local First, which has been a beneficiary of the dinner ever since. Together, the three entities connect local farmers and chefs to cook up an elaborate five-course meal for 150 attendees lucky enough to have gotten their tickets early.

An abundance of food paired with live music, elaborate desserts and beverages galore, the elegant evening is a hodgepodge

of fine dining and community connections. “You are eating all night. The wine is flowing, the food is always coming, you will be stuffed by the end of it,” Local First Director Monique DiGiorgio said.

However, there is an educational element to the dinner as well. “The story first and foremost is a way to celebrate that connection between the local independent businesses and the chefs in town that are really connected to the local farms and ranches,” DiGiorgio added.

But the educational piece does not end there. The Harvest Dinner fuels the local food machine, helping to spotlight all of its moving parts.

“Across the region, there is a lot more food produced than realized, so it’s a great way to let people realize which restaurants are focused on using local ingredients,” Local First’s Programs and Membership Director Kiki Hooton said. “It’s also a way to start a dialogue with people about using local food and supporting the local food movement, whether it’s local independent grocers, local restaurants or the farmers markets.”

The Harvest Dinner is an experience as local as it gets, and with a beautiful, rustic vibe, an intimate setting, and food created specifically for the event, there’s nothing quite like it.

“The dinner itself is just such a great community environment but also a really nice feeling and really well done,” DiGiorgio said. “It’s not the kind of feeling you get by just walking into a restaurant.”

This year, the event will include guest speaker Deborah Madison, a chef, writer and cooking teacher. Known for opening one of San Francisco’s first vegetarian restaurants in 1979, she is considered an expert of vegetarian cooking highlighting fresh produce, local foods and farmers’ markets.

It’s definitely a night to slow down, connect with neighbors, and take one intentional bite at a time.

The Harvest Dinner takes place from 5 – 9 p.m. Sat., Sept 15, at the Smiley Building. There were just seven tickets available as of press time, but for a miracle or to get a jump on next year’s event, go to local-first.org. 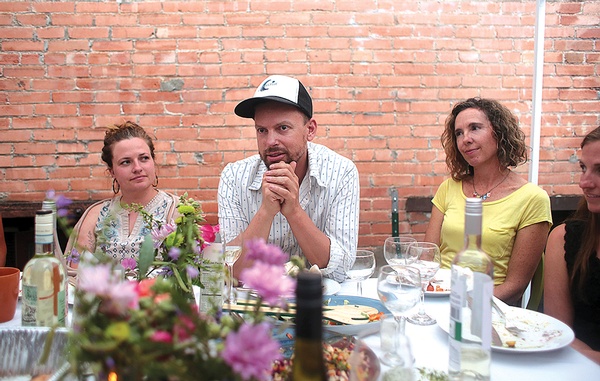