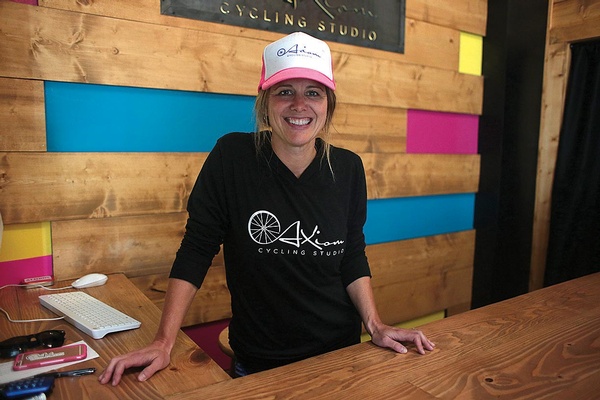 It’s a beautiful fall afternoon in Durango, and across the street from Horse Gulch people wearing various states of active wear are filing through the door of Axiom Cycling Studio. What the heck would bring typically outdoors-loving Durangoans inside on such a gorgeous Friday eve? In a word (or two): free beer. Well, that and black lights, hip music and a chance for the sweat-obsessed to check out the latest local offering.

An avid cyclist (indoor and outdoor), Axiom owner Julie Cifuni is quick to note this is not a replacement for the real thing. “Come in, bang out a 30-minute HIIT class and go for a ride in the Gulch,” she said. “This isn’t a replacement for riding, it just happens to be a workout on machines that look like bikes.”

Located in the former home of CrossFit Catacombs on 8th Avenue near the intersection with 3rd Street, Axiom opened last week after an extensive remodel. The studio offers a full slate of classes all day long, Monday through Friday, starting at 5:45 a.m. for the early birds and wrapping up with an after-work class for the non-morning people. In addition to her signature “The Ride” class, Cifuni has also partnered with the famed Les Mills program for intensive HIIT (high intensive interval training) classes as well. The idea behind these butt-kicking 30-minute workouts is that when you’re done, your revved up metabolism continues to rage like a ravenous calorie-eating monster. (For the curious, Les Mills was a New Zealand track and field Olympian in the 1960s and ’70s and all-around bad ass who founded the training method that bears his name.)

But rest assured, one need not be a bad ass to attend a class at Axiom. That’s the beauty of spin: the intensity is up to the individual, as all bike-like machines are controlled by the rider via a small knob. Feeling like super woman on two wheels? Crank it up. A casual rider who wants to start slow and taper? Dial it down. In fact, spin is the perfect low-impact option for those of us with knees not like they used to be.

On this particular evening during Axiom’s first-ever “Happy Hour” class, there’s all of the above, from young FLC Cycling bucks to soccer moms (and dads) and Millennial gym rats. But once that door closes and the black light and tunes come on, everyone’s in it together: sweating, sprinting, slogging up imaginary hills and, occasionally, grunting. Yes, grunting. This was particularly audible from the young gentleman to my right during the off-the-bike portion of the class, which entailed push-ups, squats and plank. Oh yeah, and there’s also weights – little ones, but try holding them at shoulder height while riding up an imaginary hill, and they get heavy real quick.

These are Cifuni’s way of offering a spin class like no other and making sure the upper extremities get in on the action as well. “Some people think, ‘Oh my gosh, I’m going to have a huge butt and big legs,’” she said. “But if anything, it’s going to slim them down. And we try to at least recognize that you have arms and add an upper body component.”

Cifuni, a mother and registered nurse in her other lives, moved to Durango 15 years ago. However, after years of witnessing the oft-times manic scene at the hugely popular Rec Center spin classes, she decided to bust a move.

True, she is not the first local to give the idea a whirl – most notably pro road rider Chris Wherry opened his cyclist training center, The Hub, in 2010 – but she thinks the time is right, especially given the popularity of national spin chains such as Soul Cycle, Fly Wheel and Cycle Bar.

But unlike those corporate offerings, Cifuni said Axiom, with two sparkling clean bathrooms, a future yoga/children’s tablet docking room, and complimentary fresh towels (dry and a refreshing wet one for after class) goes above and beyond. Oh, and wiping down the bike and hauling it away when you’re done – someone else’s problem.

“We wanted to make it more enticing for people – you don’t need to go to a big gym,” she said.

Another added touch: the statistics geeks can plug their heart monitors into computers on each machine that will register all kinds of fun facts, like average rpm, distance, time and calories burned.

The latter of which is especially important for the Friday night Happy Hour session, which can be toasted with a variety of delectable brews from Ska, wine and for those who may need some extra hydration before the dehydration (such as myself), that sparkling elixir, grapefruit La Croix.

And if all this doesn’t convince you to give Axiom a spin, Cifuni has one final thing to say to the “I-don’t-like-spin” fence-sitters. Those who’ve maybe had a bad experience, didn’t know how to ad-just the bike properly (Axiom instructors offer hands-on assistance with this) or just felt intimidated. Quoting the wise Flo Rida, a well-known spin guru (just kidding), Cifuni offered: “Welcome to my house.”

Axiom classes are $13 for drop-in or $110 for a 10-class punch card (first-timer punch passers get a free class.) To sign up for a class (the Friday Happy Hour is especially popular; and white is encouraged) or read more about it, visit www.axiomcyclingstudio.com. 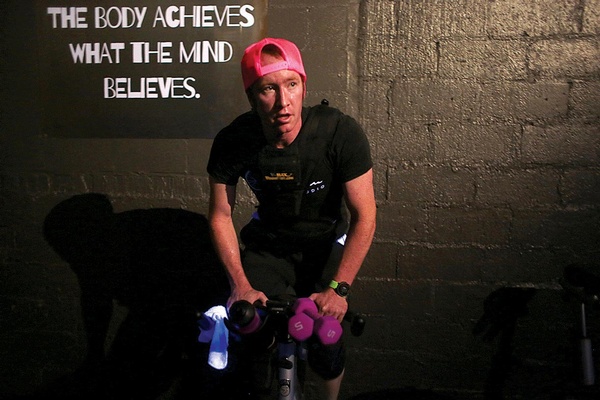 Tony Hermesman works out during Axiom's inaugural Friday night Happy Hour class. The beauty of spin class is that the intensity is up to the individual – and weight vests are optional./Photo by Jennaye Derge