A pilgrimage to Ski Mecca 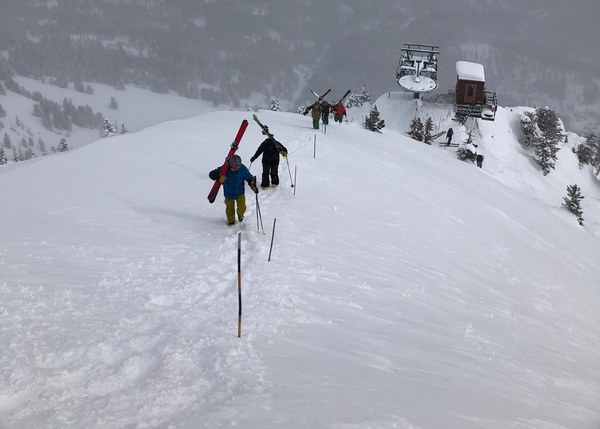 Have you ever noticed the talk around Durango’s social gatherings always centers on the next season of fun? For example, in the fall we start talking skiing and equipment. In the winter, we talk rafting (the permits we didn’t get) and upcoming water. In the spring, it’s biking and far-away adventures. This must be human nature to look ahead to the next thing. It’s what keeps us going and looking forward.

That’s why many of us planned our pilgrimage to Ski Mecca last year by buying one of the passes that gets you access at some of the great ski areas around the world. Whether it’s the Mountain Collective, ICON or EPIC pass, they all work for some type of pilgrimage to the promised land of skiing. The talk intensified as winter got closer. Everybody started naming dates and itineraries. I wish I could have fit every trip into my busy retirement schedule. But we finally settled on a mid-February trip.

It started out in a Durango snowstorm that would eventually be measured in feet. As we drove north, we wondered what were we doing leaving such wonderful powder, and shoveling. But we justified it, saying “it’s too deep for Purgatory.” We were in search of the steep and deep. As many pilgrims have done before, we stopped in Sandy, Utah, for the Snowbird/ Alta experience. It was great, but not deep, just steep. Snowbird has a unique snow pattern with lake/city effect snow, where the top of the mountain receives 2” and the bottom 8” from that cloud that hangs over the city and creeps up valley to dump snow on the lower portions of the ski area. No line on the tram made for very tired legs and smiles all around.

We then headed to Snowbasin, northeast of Salt Lake, which is an awesome area on a powder day, before driving three hours to Driggs, Idaho, which provided home base for Jackson Hole, Targhee and Teton Pass. Again, great skiing but the start of the “cold line.” By this I mean, the point where one starts to use ski clothes never needed in Southwest Colorado, like face masks, neck gaiters, and boot and hand warmers. Any exposed part of skin seems to be stabbed by pins and needles, which this Southwesterner didn’t realize was the start of frostbite. Days later, the scabs would start forming on my face. It may be why people from that part of the world look so weathered. Just sayin.

Finally, another after-skiing four-hour drive gets you to Montana, Big Sky and Bridger. Wow! so much steep terrain. We wondered why there are only young people skiing the ridges and bowls. Most of us retired folks were only good for a few of those hikes for extreme turns. Then, we went back to the moderate slopes where untracked powder was available all day.

After making our final turns and prayers, it was time to leave Ski Mecca, but a snowstorm and wind had closed most of the roads leading south. So, some stayed to pray and play more, and some started to drive around the storm. We realized that the pilgrimage was a long way from home. The vastness of our empty West is realized when taking remote roads in Idaho. But like all road trips, we made it back to D-town, and skiing Purgatory’s cruisers felt pretty good. I’ll let my frostbite heal, and start planning next year’s trip to Ski Mecca. There were rumors on many chairlift rides of a totally different pass arrangement for next year. Stay tuned, and keep tuned.