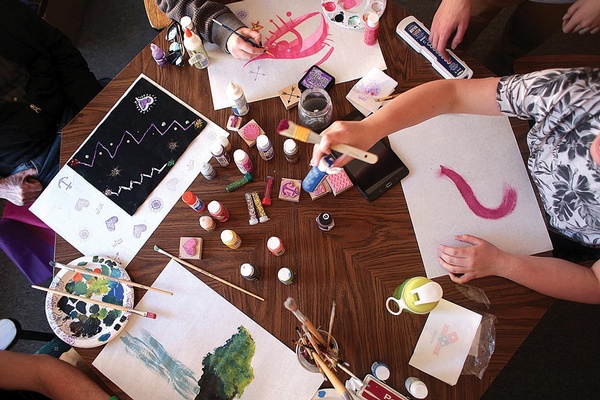 Students paint recently at the Rainbow Youth Center. The center, which provides a safe place for local LGBTQ teens, opening in 2015. It has already outgrown its space and is looking for new digs./ Photo by Jennaye Derge

With legalized same-sex marriage, everyone from Olympians to politicians coming out and pride parades in virtually every city, perhaps there has never been wider acceptance for LBGTQ youth. Yet, as many know, navigating the teen years – let alone as LGBTQ – is certainly no parade, even in progressive-leaning Durango.

“I used to be bullied horribly,” said a 15-year-old high school student who is gay.

The two were among a handful of teens who talked, on the condition of anonymity, about their experiences growing up LGBTQ in Durango. They were hanging out at the Four Corners Rainbow Youth Center, which opened in 2015 to provide a safe, nonjudgmental place for local LGBTQ youth to connect, get support – and most importantly, learn they are not alone.

The students tell their stories with candor, tinged with sadness, yet a sense of humor. “I’m more comfortable with myself, because I know I’m not the only one,” one attendee, 14, who has yet to come out publically, said.

Such stories were all too familiar for Sarah St. John and Jennifer Stucka-Benally, two former counselors at Durango High School. According to Stucka-Benally, there was a high rate of bullying of LGBTQ students at the school. As a result, in the spring of 2015, St. John came up with the idea for a place for LGBTQ kids to meet and be safe among their peers. To gain a better understanding of the circumstances surrounding the issue, she and Stucka-Benally conducted focus groups in the meeting room  at Durango Joe’s and invited the public to participate.

Local psychologist Rowan Blaisdell was among those who attended. “I showed up at the focus groups because I was looking for resources for my daughter (who identifies with LGBTQ community),” he said. After the meeting, Blaisdell ended up joining the women in their quest.

“The results were largely that this was a need and we should move forward with trying to make it happen,” he recalled. “Honestly, at that point I don’t think we understood the depth of the need.”

Based upon the need demonstrated by the focus group, the three went on to found the Four Corners Rainbow Youth Center. The center was located in a church in the Main Mall, where they were allowed to hold weekly meetings. After just a few weeks, the center received a donation that would cover a year’s rent and was able to relocate to another space just off Main Avenue (the location is not publicized for security reasons). Now, three years in, the center is once again looking to expand, as it has already outgrown this space. The ideal location would be easily accessible via foot, bike or public transportation since not all of the attendees have the acceptance of their families.

The center is growing in other ways as well. Originally aligned with the Four Corners Alliance for Diversity, in the last few months it has struck out on its own, gaining its separate nonprofit status. Its new mission statement is to provides a safe, nonjudgmental, visible space in the community for LGBTQ and questioning youth ages 13 to 18, as well as their families and allies. In addition to offering a place to gather, the center also works within the community to demystify stereotypes and empower teens, mostly through peer-led activities. Rainbow Center alumni or graduates of Durango High School frequently return as mentors for the younger members.

Blaisdell, who now shares Durango Psychotherapy with Stucka-Benally, which works with LGBTQ youth and adults, explained that at any given time, the center can have up to 18 teens in the space. Typically, they’re engaged in anything from art to conversation and support. Stucka-Benally points out that while conversation among the kids is not necessarily focused on the gay lifestyle, it might occur organically.

With a limited staff and a handful of volunteers, the center is only open a few times during the week. Currently, there are “Drop-in Mondays” for 13- to 18-year-olds, with Tuesdays set aside for support for parents and children ages 5 to 11. The age groups are kept separate because of their disparate levels of maturity. In addition, one Saturday a month is offered and might include a hike, picnic, ice skating or volunteering. In addition, the center offers an outreach program to area schools, which includes training for 9-R school nurses geared toward better serving LGBTQ youth. It includes identifying risk factors, proper terminology use and how to be the best ally possible

“Most teen-agers want their voice to be heard, and the center gives them that chance,” said Stuck-Benally.

It also allows them to process their sexuality on their own terms and, perhaps most importantly, just lets them be teens.

“I do expect a lot of problems (coming out),” said the 14-year-old. “I am not out; there’s no need to come out. Straight kids don’t have to come out. There’s more to me than being gay.”

Concurring, the 15-year-old acknowledged that some of the center’s attendees who have come out are having difficulty being accepted by their families. “Some of my family is cool with it,” he said, shrugging.

And indeed, some of those teens have been able to find that elusive sense of peace.

“Some people just go with it, they’re not too nosy,” one student remarked.

“There’s more acceptance at my school,” said another. “People understand it’s not really their business.”

In closing, the kids were asked what else they would like to tell people. One joked, “Be sure to drink lots of water!”

But then the tone turned a little more serious. “We’re very open here, we talk to one another,” said the 16-year-old. “Kids reading this (should) know they can come to us.”

For more information or to donate to Rainbow Youth Center, visit www.rainbowyouthcenter.org. 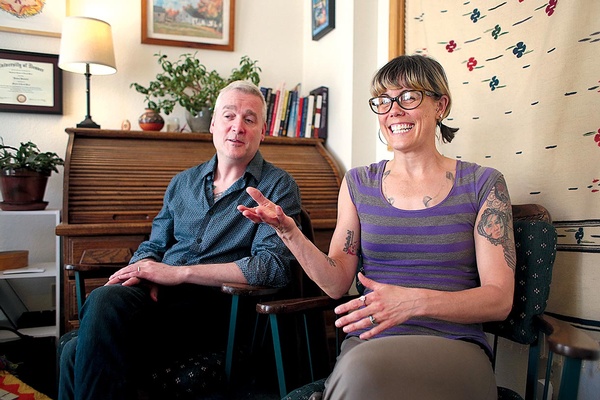 What: Rainbow Youth Center annual fundraiser
When: 6 – 10 p.m., Fri., April 27
Where: Powerhouse Science Center
Tickets: Available at Maria’s Bookshop or rainbowyouthcenter.org
Music by Caitlin Cannon and Denae Stucka-Benally, silent auction, food and cash bar. 21 and over,
Sponsored by The Colorado Trust
Back to Top