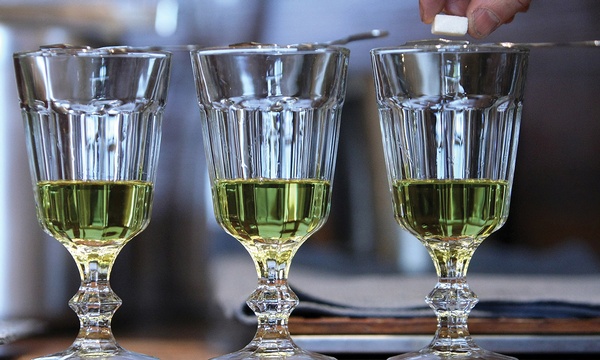 As usual, I wanted something locally made. This time from the liquor store. You know, a holiday bottle of cheer for friends back in Brooklyn sort of thing. Lars, on my last visit, showcased a fragile yellow bottle of buffalo grass vodka from Upstate. Reminiscent of – though certainly not as powerful as – green chartreuse, it seemed to render us very apt-minded indeed. Until we soon found ourselves weeping in the middle of the afternoon, overwhelmed by David Bowie’s just awarded “Blackstar” CD.

Spirit notes. Timeless moments. That’s what I’m after – a special liquor guaranteed to deliver a poetic punch, a real alcoholic kick that announces a fair well to sobriety (for now anyway).

I’ve just missed the only day of the year (Dec. 1) where you can stand in line with a thousand or so other folks in Denver to buy the cult-like Stranahan’s Colorado Whiskey, Snowflake Batch 21. However ungodly rarified, I was in no position to travel or spend a hundred bucks on a bottle, nor wait on the cold street for anything that’s not supporting my own dang neighborhood.

In downtown Durango, I find a wonderful world full of liquor, a large store with what looks to be a million-dollar-plus inventory of booze. Quite impressive. After strolling the aisles, I find myself staring at a creepy $65 bottle of absinthe; its Gothic label seems to advertise contents that just might very well make you dead. Hmmm. Getting close.

Right next to it, I see what I’m looking for. A bottle of absinthe brewed in Golden, with a price point that makes more sense ($24). The bottle’s label: Damn. Good. Absinthe Verte. A very strong spirit (110 proof), that’s flavored green with botanicals of medicinal and sometime mysterious value. It’s a new product from State 38 Distilling made with local, hand-forged ingredients. Perfect. I buy it along with a mini bottle of absinthe produced in France for a taste-and-buzz comparison. The latter, rather sly, boasts “a full measure of the legendary and notorious botanical, wormwood, aka artemesia Absinthium,” the herb thought to produce a hallucinogenic euphoria that can make slicing one’s ear off seem necessary and painless (I guess).

So caution, dear reader. Before we party like it’s 1899, we’d be better suited to refresh ourselves on the history of this Belle Epoche elixir and find out why it was banned around the world for nearly a century. That way, enduring the taste will seem more worth it. (The word “absinthe” is derived from the Greek word “apsinthion,” meaning “undrinkable.”)

Wormwood was used for medicinal purposes in ancient Egypt. In papyrus documents dating back to 3500 BC, it’s confirmed to be the best treatment (at the time) for intestinal worms. The ancient Greeks made worm-wood-flavored wines, “absinthe oinos,” which began the connection. In the sense of a distilled spirit containing green anise and fennel, absinthe was created around 1792 in Couvet, Switzerland. Like the drink itself, the facts of who really invented absinthe remain a bit murky. Was it the Henroid Sisters (who feared being labeled as witches) or their newly acquainted fine French friend, Dr. Pierre Ordinaire?

Who knows? Let’s hop to 1805 when Henri-Louis Pernod opened an absinthe manufacturing company in the French town of Pontarlier, under the name Maison Pernod Fils, which remained the most popular-selling brand of absinthe until it was banned in 1914.

The consumption of absinthe grew rapidly throughout the 1840s, when it was surplussed to French troops as a malaria preventative. The soldiers brought their thirst for it back home, where it became so popular in bars, bistros, cafes and cabarets that by the 1860s, the five o’clock hour was called “L’heur vert,” the green hour. It was wildly favored by all, from the wealthy and bourgeoise, to the poor and ordinary working stiffs.

By 1880, absinthe was produced en masse, which meant a sharp decline in the price. Popularized by some of the greatest literary and artistic figures in history, it defined the heady days of late 19th century Paris. Bohemian luminaries such as Van Gogh, Degas, Toulouse-Lautrec and Picasso were inspired by the “mind-altering” effects, painting faces of filthy men and puffy women staring out at nothing at daytime cafes, sodden and benumbed. The all-powerful art critics absolutely HATED these “impressions” of degenerates.

And so, before too long, it became pretty clear that absinthe made a “beast of a man, a martyr of a woman and a degenerate of an infant.” That it “disorganized and ruined the family and menaced the future of mankind,” was probably not too far off track.

Talk about a country over-served. The over consumption of absinthe in France was so rife that it was believed to produce a syndrome called absinthism, characterized as addiction, hyper-excitability and hallucinations. Sufferers were all drunks and alcoholics for sure. But some of absinthe’s bad effects were possibly caused by unscrupulous manufacturers adding cheap and often poisonous ingredients such as copper sulphate for that extra green effect, or antimony trichloride to enhance the louching (clouding) of the beverage. Not to mention that glassware at this time was made of lead.

The (mostly) myth behind the effects of absinthe going beyond that of just alcohol was driven even further when it was blamed for Van Gogh’s ear-lopping and filling asylums with people made insane by drinking it. Parisians started ordering absinthe by asking for “une correspondence,” a reference to a ticket to Charenton, an infamous lunatic asylum on the outskirts of the city.

The drink also became associated with violent criminals. Probably the most notorious story occurred in 1905 when Swiss farm laborer Jean Lanfray shot and killed his pregnant wife and two daughters, supposedly in an absinthe rage. A second murder a few days later in Geneva, where a heavy drinker named Sallez also murdered his wife, led to an outcry throughout Switzerland.

This bad reputation and the rise of the temperance movement led to absinthe being banned by the Belgians in 1905, followed by the Swiss in 1910 and the United States in 1912. Meanwhile in France, the government was under pressure from conservative newspapers, winemaking associations (still trying to recover following the decimation of European vineyards by Phyfloxera), and the impending world war to stop its production. So, it was in 1914. Italy was the last country in Europe to ban absinthe (1932.) The United Kingdom,

Spain and the Czech Republic never did. Wormwood does have a psychotropic ingredient, thujone, which has a molecular structure similar to cannabis. That is why the drink has been linked more to narcotics than to other alcoholic substances. The trouble is that thujone is served up in such a low dose, that you would sooner die of alcohol poisoning than go mad with the sighting of green fairies and such.

About 10 years ago, absinthe was reintroduced to a world of more responsible drinkers, and more enlightened distillers. It’s totally legal here and everywhere, for anyone (who likes the black-licorice flavor of anise) to enjoy. I like it served as an aperitif: Absinthe and Prosecco 3:1.

I drank some of the bottle from Golden just the other night. Very light, herbaceous; lots of minty notes. Much less bitter than the French stuff. Our friends Tom and Laura sniffed at it but were quite wary of touching their lips anywhere near it. My husband: definitely not a fan. Despite lots of insistence that absinthe is only about as harmful as gin, they were adamant in their refusal.

Fine. More for me. After I poured a super milky third cocktail, my husband slipped behind me and dumped the glass into the sink.

“Hey! You can’t do that! You’re messing with my civil liberties!”

“There’s no legal provisions, rights or protections for drunks here. And so let it be known that Absinthe ankkoyoance is hereby banned from this house.”

He poured the entire contents of the bottle away, and calmly re-sat himself at the dinner table. Tom and Laura’s eyes had widened, but their want to finish dinner was stronger though than the urge to flee. So we continued naturally into an evening of good food and conversation, about – me, me, me!

Sorry guys. If it’s any consolation, the absinthe hangover was a real son-of-a-bitch of ice-pick stabbing in each temple, and just beneath, throbbing. And I thought to myself, tossing beneath the covers: does the left ear just need to go?