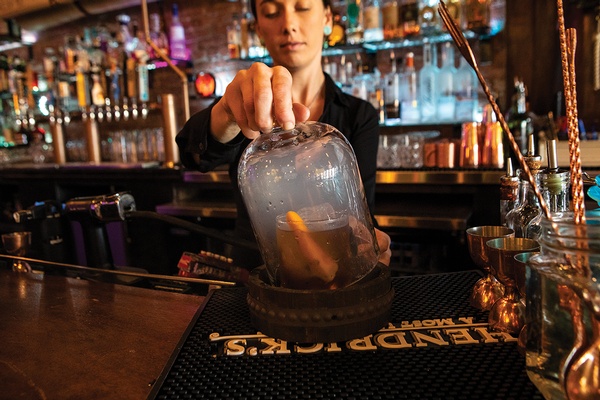 "Drink chef" Allison Perewitt at the Derailed lifts the glass on a smoked Kentucky Campfire (which, incidentally, also contains bacon.) Other new twists in the cocktail world include fat-washing and croptails (think white cheddar popcorn martinis.)/Photo by Stephen Eginoire

It was an off-hour in the afternoon. We stepped inside a 100-plus-year-old downtown bar not far from the train. The atmosphere was muted, shadowy. A young bartender in a bow-tie pulled at his beard.

“Do you wash your spirits here,” I casually ask, thumbing through the drink menu.

“Uh, we smudge them with sage every once in a while, but I don’t think it’s working.”

I was thinking more in terms of a duck-fat washed bourbon. Even better, an avocado-oil washed gin with house-made lime tonic.

The “new” bar craft scene, sodden with painstakingly eccentric techniques, results in noisier cocktails, even more abundant in detail and flavor. You’d think that after 20 years, the bitter, old-fashioned drinks of the giddy, retro Prohibition era had met critical mass. But that’s not the case. Nowadays, a “post-modern renaissance” is bubbling over with bent terminology and farmer’s market ingredients.

Like fat washing. It has nothing to do with ghosts or the dish pit, as some might think. It’s a more twisted version of booze infusion. A tasty trick that was created by a NYC pastry chef and perfected at the famous speakeasy PDT (Please Don’t Tell) circa 2007 with its bacon fat-washed old fashioned.

Alcohol binds to fat, which takes away the harsher elements of say, rye. It adds flavor and a barely detectable texture, giving a new dimension of thickness. Almost anything can be used to wash a spirit, animal fat, nut oil, even a grilled cheese sandwich. And it’s pretty simple.

For the mixologist in your house: pour 1 ounce of coconut oil (browned butter is good, too) into 12 ounces of your favorite rum. Place in a mason jar. Close tight, shake vigorously, let it rest. Place in freezer until the fat has solidified, two or three hours. Scrape fat off; strain the liquid through a cheese cloth-lined funnel into another mason jar, and voila?. Your beautiful fat-washed rum is ready for lime and ice, and whatever else you can imagine.

Another relatively new pet on the mixology scene is the gastrotail. A typical recipe would entail something like honey-crisp apple-infused vodka, hand-torn sage and a handful of whole peppercorns shaken over ice with lime and house-made vino-blanco wine syrup. Whew. In a similar vein is the croptail, but be forewarned: it’s not as healthy as it sounds. It’s a savory cocktail that may require a fork to finish. Vodka on the cob – sweet vermouth vodka garnished with a skewer of white cheddar popcorn – is one example. Sip and munch or dip first for a different effect.

To further muddy the alcoholic waters, croptails and gastrotails should not be confused with wellness drinks – alcohol-light cocktails made with a cornucopia of organic plants, sometimes referred to as vegetables. Go ahead and drink your salad. Think of a kale martini, lemon champagne, greenhouse sage margarita or a “skimlate,” made with the Voli Lyte vodka. Arugula and snap-pea syrups are fashionable, as are carrot soda and turmeric. Lots and lots of turmeric to soothe a simmering gut. Or maybe to alleviate the guilt of (gasp) drinking.

Draft craft cocktails are also on the front end of the industry. Listing CO2 as an ingredient may prove a talking point, but like draft beer, draft cocktails – batched at the bar or pre-filled – come fresh from a keg through a gas-powered tap.

Batched retro cocktails have bar owners’ full attention. The cocktail renaissance, trending from a specialty bar setting to the clubs, pubs and restaurants of today, have left the industry with a real skills shortage. Rather than paying money to train a fickle millennial, batched draft is a brilliant, ultra-convenient alternative.

Is that so bad? Let’s see. In the excruciating time your ex-wrestling-star-turned-mixologist can measure, mix and pour a Negroni, a kid with no experience can serve 20 people an elevated version of the same drink in instantly frozen stemware, with not only a better attitude, but more consistency and at a (slightly) cheaper cost.

Bottled and canned craft cocktails are one way to savor a finely made cocktail at a moment’s notice. If you’re thinking of the pre-mixed, day-glow crap of the past, forget it. The new generation of craft distillers whip up batches using top shelf liquors and high-quality ingredients. They’re a cushy, portable way to sip a classic drink on warm, lazy days on the lake, river or peaks.

In addition, the 75-cent ice cube is replacing the familiar crescent-shaped ice that waters down your drink, known in the industry as “shitty hotel ice.” You may think, hey, any ice is better than no ice. But, today’s discerning bartenders want better, bigger cubes.

“Do you harvest your own ice,” I asked Lucas, the bar manager at El Moro. Because he serves Fernet Branca on tap, I was hopeful. He promptly produced a nice bag of crystal-clear, 2-inch ice cubes used for their rocks drinks.

“The chef has his fire. We have our ice. I just cut these this morning,” he beams.

Good boy. Like diamonds, you’re looking for purity, clarity, size and shape. As in the past, drinks today are punctuated with different shapes of ice, specified for different recipes. Lumped for cocktails, shaved for juleps, cobblestone (crushed) for the booze-heavy.

Your old-fashioned neighborhood bartender who pours Fireball and Bud Light may think the term “mixologist” implies an arrogant, tattooed kid with a waxed mustache. (FYI, “drink chef” has replaced mixologist in some more forward parts of the world.) Can’t we all just get along?

Personally, I like the word “intoxicologist,” a server with a knowledge of strong, old classic cocktails. But more, someone who’s there with a quick joke and to light up your smoke (or smoked old fashioned). Jaycie, who works at The Bookcase and Barber, is kinda like that. She’s never heard of the term drink chef but does consider herself a “cocktail creationist.” (They go through 250 pounds of fruit a week, composted by Table to Farm.)

Finally, the ultimate litmus test of a bona fide craft cocktail bar is boutique vermouth. Think savory, hyper seasonal and hyper local. Cucumber vermouth sangria. Vermouth with beet and eucalyptus or serrano chili and lavender. If vermouth doesn’t have its own menu, you may be in a place less desirable. Like the other day in Farmington.

“A Punt e Mes on ice with an orange twist,” I say. The barman, a husky 50-something with mutton chops, stares at me.

“You want vermouth on the rocks? Is that it?”

“Dolin Dry if you have it.”
He shakes his head.
“Atsby Cake?”
“Lady, we got Martini & Rossi, white and red, but I wouldn’t recommend either one without vodka or bourbon.”

I order a little of both on ice, with an orange slice, please.

He glances at the people next to us like I just asked for a freshly plucked root of Florence fennel. It might seem uncouth, but sweet vermouth mixed with dry is delicate and crisp and tastes excellent with cheese.

But all these new (old) drinks, even the simplest, may go beyond flavor to something more subliminal. They can have an emotional impact. The bartender pours the drink into a short glass over shitty ice with a tiny red straw. I stir it. The colors mix into a rich, golden mahogany. I take a sip and hundreds of years of cultivation roll down my throat and light me up like a rollicking sea. 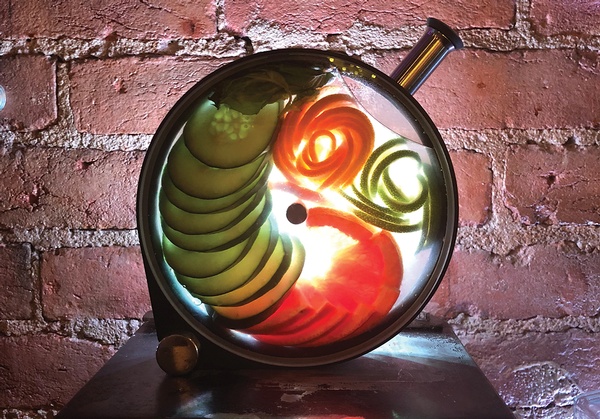 The Derailed's boozy cucumber-citrus infusion – a delight for the eyes and adventurous drinkers./Photo by Donna Hewett. 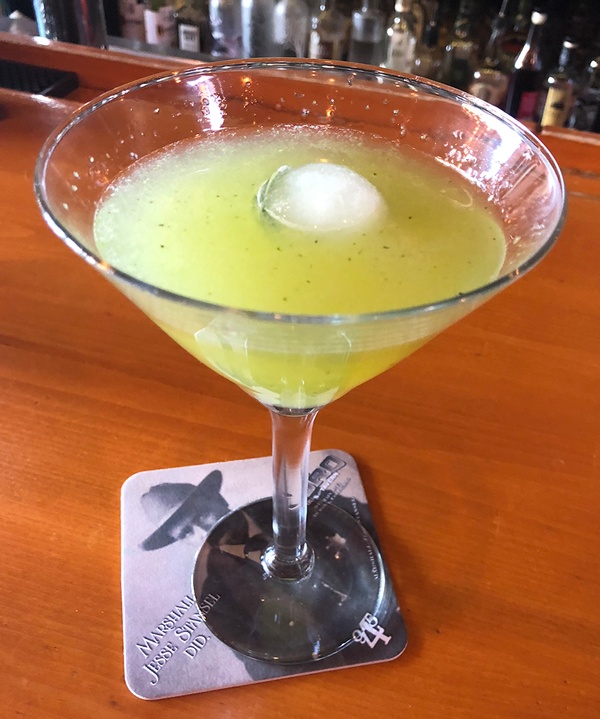