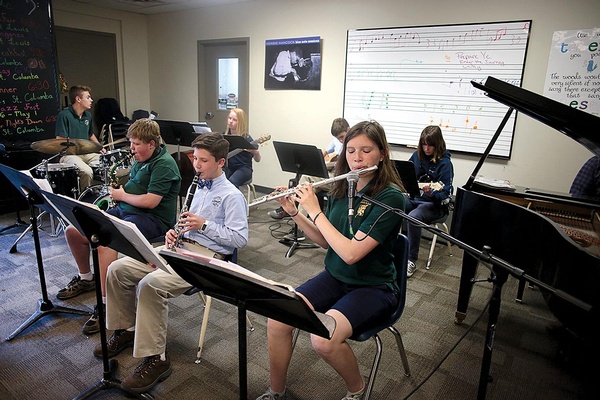 Students in the St. Columba Band practice ahead of their performance at the Reno Jazz Festival this week, where they joined almost 400 groups from colleges and middle and high schools all over the West Coast. The annual event is a place where young jazz musicians can compete, share experiences and learn from some of jazz's top professional performers./Photo by Jennaye Derge

When people think of jazz, it usually involves images of big bands from the early part of the 20th century or small rooms filled with smoke and a saxophone. But, it’s not a musical genre lost to an older era or a smoke-filled basement.

Jazz is alive. The modern jazz scene is filled with thriving musicians and young enthusiasts from a new generation.

Nowhere is that more clear than the Reno Jazz Festival – an annual event that started more than 50 years ago. The idea was to bring the best young talent from the West Coast to one place, where they could share their love of jazz and learn from the professionals. This spring, 14 Durango students headed west to make their mark on Reno.

“We feel what our students have to offer is exceptional,” said Easton Stuard, who along with his wife, Alisa, heads up the band and music program at St. Columba Catholic School in Durango. “We’re also excited for them to see college groups … to see what’s out there.”

And, that’s exactly what they got to witness.

Together, the Stuards organized the trip, the first of its kind for the middle school group – called The St. Columba Band – and the high school group –The Elevated Jazz Quartet.

Alisa said after the festival, which was held last weekend, most of the students talked about how they didn’t realize so many people could get together in one place to share and play jazz.

Even more than being among other jazz musicians their own age, the students were surrounded by some of the industry’s best talent.

The Bad Plus Joshua Redman were the festival’s headliners. With 10 albums already on the shelf, The Bad, a New York-based jazz trio, collaborated with Redman to create The Bad Plus. They first started performing as a

quartet in 2011 and have been pushing the boundaries of modern jazz ever since.

As the group headed home from the trip, Alisa said the students were singing the melody to jazz standards. She was also inspired by the trip, hoping to start offering a vocal jazz class in the mornings.

After all, the early morning class is really where this trip began.

When Easton and Alisa first arrived at St. Columba, they started offering an early bird class – which started before the students’ regular day. Parents had to get their kids to school twice a week before 7 a.m.

The class proved so popular it became part of the regular schedule and has grown over the past few years.

This is the couple’s third year working with students from that first early class, which has grown into a middle school jazz combo with percussion, horns and a vocalist. It’s smaller than the typical big band, but their sounds are inspired by the big band legends.

The Stuards explained it’s a blessing to be able to tailor their program at St. Columba to accommodate the students’ talents and interests. For example, the students rotate through different instruments, which al- lows them to be exposed to ones they may never have thought of playing.

“We feel lucky to be able to have the classroom size we do,” Easton said. “It’s really a great environment.”

They’ve not only been able to develop the music

program at St. Columba, they’re now collaborating with the school’s theater department in an effort to benefit both programs.

This May, the budding musicians at St. Columba will perform much like an orchestra pit for the school’s modern take on William Shakespeare’s “Midsummer Night’s Dream,” which opens May 11.

They’ll also be showcasing their work during a fundraising event at The Rochester Hotel’s Secret Garden on May 13, and an Open Mic Night event in June.

The Stuards don’t just work with their students for performances, they also help to craft the programming – something that is key for competitions like the Reno Festival. It also has opened the door for something very personal.

“The last song we added was from the heart,” Easton explained.

Saint Columba lost a student during the previous school year. In honor of this student, Easton penned a special piece the group played to close out their performance.

For the song’s inspiration, he turned to the ocean and one of the student’s favorite animals – the jellyfish.

“It’s exactly the influence I needed,” he said. “It was a privilege (to write.)”

Easton grew up in Eureka, Calif., and first went to the Reno Festival when he was in high school. The opportunity to be around other musicians, compete and learn from some of the professions’ best had a profound influence on him as an educator and musician. So, he knew his students would have the experience of a lifetime.

“Music is a really great way for the kids to share in a community,” Easton said.

This year’s participants in Reno included almost 400 bands from colleges, and middle and high schools up and down the West Coast.

Most of their competitors were big bands, and a majority hail from West Coast high schools and colleges. Only two schools had longer journeys than St. Columba – Legend High School just outside Denver and The University of Nebraska at Kearney.

In their first year at the festival, the Stuards watched the high school group – which actually included one Animas High student, one Durango High student, and two local 8th-graders – take home third place in the B High School Combo category, one of several competition categories in Reno based on school size and age.

What really made this accomplishment stand out, though, were the final scores.

In a highly competitive category filled with mostly high school seniors, they were only 12 points out of second place and just 75 shy of taking first. That’s out of a possible 3,000 points.

Aside from the band competitions, the students received six Outstanding Performer Awards between the two groups – making the trip to Reno an even bigger success.

It’s uncertain if they’ll be able to return next year, but what’s not in question is everyone’s desire to go back. The last time a group from Durango attended the Reno Festival was 10 years ago, and no one wants to wait another decade.

“All of our kids wanted to go back,” Alisa said. “We’re definitely thinking about it.” 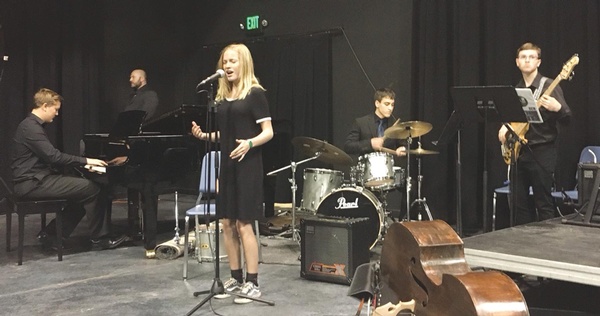 Along with running the band and music program at St. Columba, the Stuards also run The Music School. To learn more, email easton@themusicschooldurango.com.