Along for the ride
A Saturday night on patrol in Durango 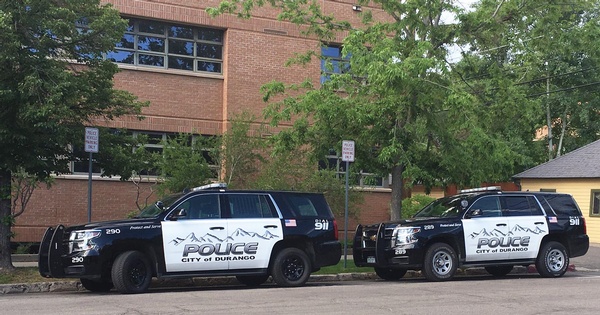 A pair of Chevy Tahoe police vehicles await their next call outside the City of Durango's downtown Police Department./ Photo by Lainie Maxson

I arrive a half hour early but think better of seeming like a suck up, so I sit in my car and try to imagine who I’ll be spending my Saturday night with. Will it be a gregarious, gung-ho rookie or a seasoned, cynical veteran? I decide it’s time to meet my badge-carrying blind date, so I take a deep breath and push the call button outside the police station door.

A smiling officer opens the door and leads me inside to a small, dark room where the Durango Police Department’s evening role call is in progress. Inside, there are a handful of uniformed officers watching a YouTube video of a recent arrest made outside a bar in Fort Collins. The video shows a petite, young woman in high heels and a short skirt, purported to be a CSU sorority girl, as she is body slammed to the ground, face first, by a male officer.

I’m handed a bullet proof vest to put on and struggle with the Velcro while the officers discuss the footage. I’m unnerved by the brutality on the screen and the maniacal laughter of the bar patron who was filming the event. I start to feel some trepidation about what the evening may have in store. I also find myself wondering what happened before the camera started rolling. 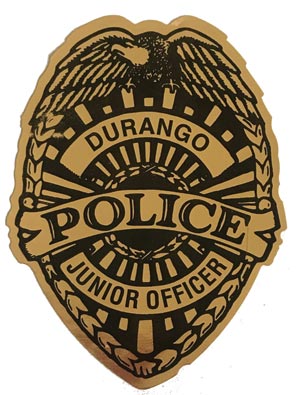 The room lights come on and a young male officer with a warm, slightly shy smile approaches me and tells me that I will be riding along with him.

We climb into a Chevy Tahoe and make small talk. I learn that he has been on the force for about a year. In addition to being a patrol officer, he is happily married with two young children and is also minister to a local Christian congregation. I ponder the juxtaposition of his two occupations when our first call of the evening comes over the radio.

The location is a local doughnut shop – I know what you’re thinking – but no, we aren’t heading there for a snack. Instead, we’re responding to a tripped security alarm. The officer asks me to wait in the car but hears my audible sigh and acquiesces to letting me stand near the corner of the parking lot while he secures the perimeter. His “cover” officer, in another Tahoe, pulls over a pick-up that is loaded with gear and heading out of the alley. I stand nervously about 20 feet away and try to figure out what to do with my sweaty hands as I watch the first officer move cautiously toward the back of the building. The second officer questions the driver of the pick-up. They clear the building and I tag along like a puppy. As we approach the entrance, we discover that the vestibule door is ajar but the door to the building securely locked.

We return to the Tahoe just as the officer’s cell phone rings, and I learn that Chet Faker’s cover of the bootylicious R&B classic “No Diggity” is his ring tone.

I’m amused, a little confused and oddly relaxed by this revelation. I giggle to myself as he arranges a ride for a parishioner to Sunday service.

Our next call involves a man who is high on LSD. An ambulance arrives at the man’s residence just as we do and I wait with the paramedics while the two officers enter the home. The man comes out peacefully and the medics check his vitals while he explains the variety of drugs that he remembers taking. One officer takes the man to detox and the other takes me back to the station for some paperwork. While I wait at a desk, a friendly female officer smiles as she writes up a report of her own. She explains that a man has called to complain that his sperm has been stolen. He contends that during a consensual coupling, the woman involved suddenly removed the condom, against his wishes and he refuses to be responsible for any resulting offspring. A past mug shot of the man on the officer’s computer screen reveals that he possesses the homely features of a young Steve Buscemi, and I can see why he might not want to give his genetic gold away all willy-nilly.

As we head back to the streets, I notice that a slight giddiness has overcome my uniformed companion. He explains that a man on the DPD’s most wanted list has been spotted, and he’d like to be the arresting officer. When we arrive on scene, I am told to stay in the Tahoe. I watch as the wanted man’s hands reach for the top of his head, he is patted down and the handcuffs go on, but I’m unable to hear the dialog. The arrested fellow is cooperative but I start to get edgy as he is brought toward the vehicle and I realize that he will be sitting directly behind me.

We drive out to the La Plata County jail as the cop asks polite questions and the man answers cordially.

We pull up into a large garage and a massive metal door closes dauntingly behind us. An interior door buzzes open, and we bring the arrestee inside to booking. The officer is patient and kind, the arrestee peaceful and compliant.

Our next call, once again, involves doughnuts but this time of the vehicular variety. Reported to be taking place in the Rec Center parking lot, we pull up to a group of kids. We speak to a teen-aged boy who claims that a different
kid, we’ll call him “Kenny,” was the one responsible for the reckless driving but that Kenny drove off shortly
before we arrived. We catch up with Kenny a few blocks away. He claims that he couldn’t have been the one responsible because he has been at the movies for the last few hours

“What movie did you see?” the officer asks. “Uhhhhh.” Kenny replies.
The officer warns that lying to a cop is never a good idea and sends Kenny on his way.
I ask if being lied to on a regular basis bothers him.

The calls slow down, and we drive from one end of town to the other discussing religion and politics – two things that my mom always cautioned me against getting into, especially with someone wearing a gun. We talk about craft beer, marriage, the reformists, panhandlers, baby foxes, mental illness, the restaurant business, prohibition, and the absurdity of real estate prices in Durango. It’s almost midnight, and we’re cruising down Florida Road as a woozy young woman wobbles into the bike lane with her thumb out. I’m told local law states that hitchhiking is only legal if the person looking for a ride remains stationary. But we aren’t approaching her to enforce this seemingly absurd rule. She is clearly intoxicated and weaving ever closer to the middle of the dark street. I ask if giving rides home is something the officer does.

“Unfortunately, not.” he says.

We stop in the median, turn on the lights and sirens, and the officer walks up to the hitchhiker and her two girlfriends. I stay in the Tahoe as a back-up officer arrives. The Tahoe windows are rolled up but the swaying body language of the women speaks loudly. I watch as the hitchhiker gets uncomfortably close to one of the officers. He recoils as she attempts to touch him. I hear the call between dispatch and the officer while the women’s IDs are checked. All three are students at the college.

I learn that the first officer on scene calls the shots, and in this case he has decided to let them off with a warning and instructs them to go directly home and sober up.

I watch as the unsteady trio walks up the river trail.

The two officers haven’t been back in their cars for a full minute when the hitchhiker sways dangerously close to oncoming traffic. We turn the lights back on and stop beside them again. This time the officer helps two of the women into the back of our ride, his partner helps the third woman in to his vehicle and we drive them home.

The hitchhiker is seated behind me, her breathing is huffy and erratic as she bangs her head against the window. We arrive at their apartment complex in what I fear is just enough time for me to avoid her hot vomit on the back of my head. The women pour out of the vehicles and stumble up the stairs. Once on her doorstep, the hitchhiker turns to face the Tahoe and proceeds to flip us off while making extremely lewd gestures toward her crotch and mouth.

This cop, at worst, just saved her drunken, belligerent ass from becoming road kill or, at best, spending the night in detox. And this is how she repays his kindness.

The officer can’t see the gestures but reads the outraged look on my face.

He doesn’t turn around, but even without looking back, he knows. I feel a compelling desire to get out of the car and offer her a repugnant reply of my own but the officer’s cool pacifism calms my impulse.

We drive back to the station and talk about the woman’s impudence, and he tells me that he isn’t interested in retribution. What bothers him is the likely DUI that swerved out in front of us, with a tail light out, while we were driving the trio of terminal temerity safely to their apartment.

I don’t know what the Fort Collins sorority sister in the YouTube video did, if anything, to deserve her face-plant onto the concrete. But if she behaved anything like the ungrateful hitchhiker, there’s a good chance she wasn’t as innocent as the video might suggest. I’m also willing to concede that not every police officer possesses the patient pacifism of a pastor. But I can tell you that the cop I spent a raucous Saturday night with in Durango personified what it means to be a peace officer.