An open book
After 35 years, Maria's steps into the future with a familiar face at the helm 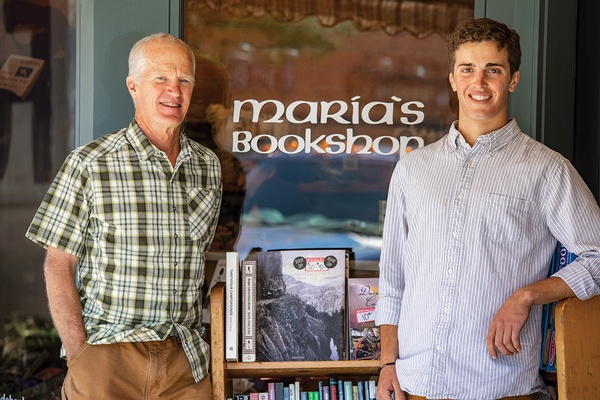 Evan Schertz, right, is taking over Maria's Bookshop from his parents, Peter Schertz, left, and Andrea Avantaggio. The change in ownership comes just as the shop celebrates 35 years in business. Evan's favorite book is Shantaram, pictured below. It's one of many recommendations featured on the shop's 35th anniversary bookmark./Photo by Stephen Eginoire

Many things about Maria’s Bookshop have always remained the same – the sense of community, the attention to Southwest stories, and the support for all things local. But, one thing is completely new for the bookshop about to celebrate its 35th anniversary.

For the first time, it’s staying in the family.

When word came out last year that Maria’s Bookshop on Main Avenue was up for sale, a sense of unease swept over many in the community.

At the time, Evan Schertz – the son of owners Peter Schertz and Andrea Avantaggio – was studying mechanical engineering at the Colorado School of Mines. He wasn’t set on a specific career path; rather he just loved to learn and understand exactly how things worked.

So when his parents told him about their plans to sell Maria’s, the thought of taking over crossed his mind. But, he didn’t share that with them.

Like an itch he couldn’t scratch, though, the idea never went away and it soon became clear what path he needed to take. The next step, of course, was sharing his thoughts with his folks.

“I was pretty nervous,” he admitted.

Any nerves, however, were quickly calmed. As much as his parents said they were surprised by the announcement, they were also happy about it.

“It was very much a surprise, but a good one,” Avantaggio added. “I’m very proud of him for recognizing the opportunity, for not walking away.”

After sitting down to figure out some of the details, it was time to let everyone else know.

This past spring, Evan and his parents gathered the staff at Maria’s for an early morning meeting.

“I’d been nervous about it for months,” he explained.

Some of the employees were surprised, and others admitted they saw it coming. But what everyone had in common was encouraging words and positive support.

“It was the most encouraging talk,” Evan said. “I got to hear everything about what they loved about working at Maria’s, and about the future of it. It was amazing.”

With backing from the booksellers, it was time to tell the community. And, the response wasn’t much different. “Just about every day since I came back here, somebody has expressed their gratitude, excitement and relief about the future of Maria’s,” he said.

“It’s been heartwarming and encouraging.”

Over the past several months, Evan’s taken on the tasks and the title that come with ownership and management of the bookshop. But, there’s no rush to cut ties.

The plan for the family is to continue to pass the baton over the next six months.

At 22-years-old, Evan’s younger than his parents were when they purchased the bookshop in their 30s.

“I think he’ll probably learn it faster than Peter and I did,” Andrea said. “It’s more the attitude you bring to it, than the years you bring to it.”

Sometime after the start of next year, Andrea and Peter will step away, and give Evan and the staff some “thinking room,” as she puts it.

“I like to think I’m open to new ideas, but I also know I come with a lot of history,” she explained. The two soon-to-be-former owners of Maria’s plan to stay in Durango, maybe even take some time to hang out in the garden or go for a bike ride.

“As much of a planner as I’ve always been,” Andrea added, “I’m trying not to plan this.”

For anyone who’s passed through the doors of Maria’s, the reason it has outlasted all the rest is because its owners have always listened to the locals.

“The community has a sense of ownership,” Peter explained. “This is theirs. All we do is reflect that back to them.”

That connection to the community, he said, is a culture created by Dusty Teal.

Teal, along with manager Mary Ann Griffin, who was often considered the face of Maria’s, ran the bookstore for almost 15 years before selling it in 1998.

Those two are credited with building the foundation Maria’s stands on today. Not only did they actually help lay the bricks for the shop’s current fac?ade, they gave it a name.

Originally called The Bookshop, Teal and Griffin discovered the iconic bird logo created by a famous New Mexican potter named Maria – and the rest is history.

Peter and Andrea, who purchased the bookshop from Teal in the spring of ‘98, spent the next two decades solidifying Maria’s as an icon of Durango.

It wasn’t just where to go to keep in touch with the Southwest lifestyle or get advice on the latest page-turner, it had become so much more – a place to purchase gifts, tickets for shows, local fundraisers, school field trips, readings, meetings and even a must-see-stop for tourists.

Locals could depend on it, and visitors could be forever inspired.

Even with the rise of the big-box bookstore chains and the onslaught of internet retail behemoths, it has not only survived it has thrived.

Independent bookstores, like Maria’s, offer something that big business can’t – a relationship to the community, support for local interests, and person-to-person connections.

“When you can walk into a store and have a chat about not just the books, but the ideas in those books, Amazon doesn’t give you any of that,” Evan said.

It’s a formula that’s working across the industry. Even with cheap, easy access to the latest best-sellers, small independent bookstores are the ones with increasing sales and growing numbers, according to industry experts.

Keeping the connection between Maria’s and the community is definitely a priority for Evan. “In some ways, it’s a daunting task because it’s been done so well,” he said of his parents. “But in some ways, it makes it easy too.”

It’s what has carried Maria’s through the past several decades and is likely what will take it through the next several.

“My whole life I was steeped in the culture of what Maria’s means to both the people who work here and the entire community,” Evan said. “I was always really proud to be the kid whose parents owned Maria’s Bookshop.”

Now, that mantle belongs to him. 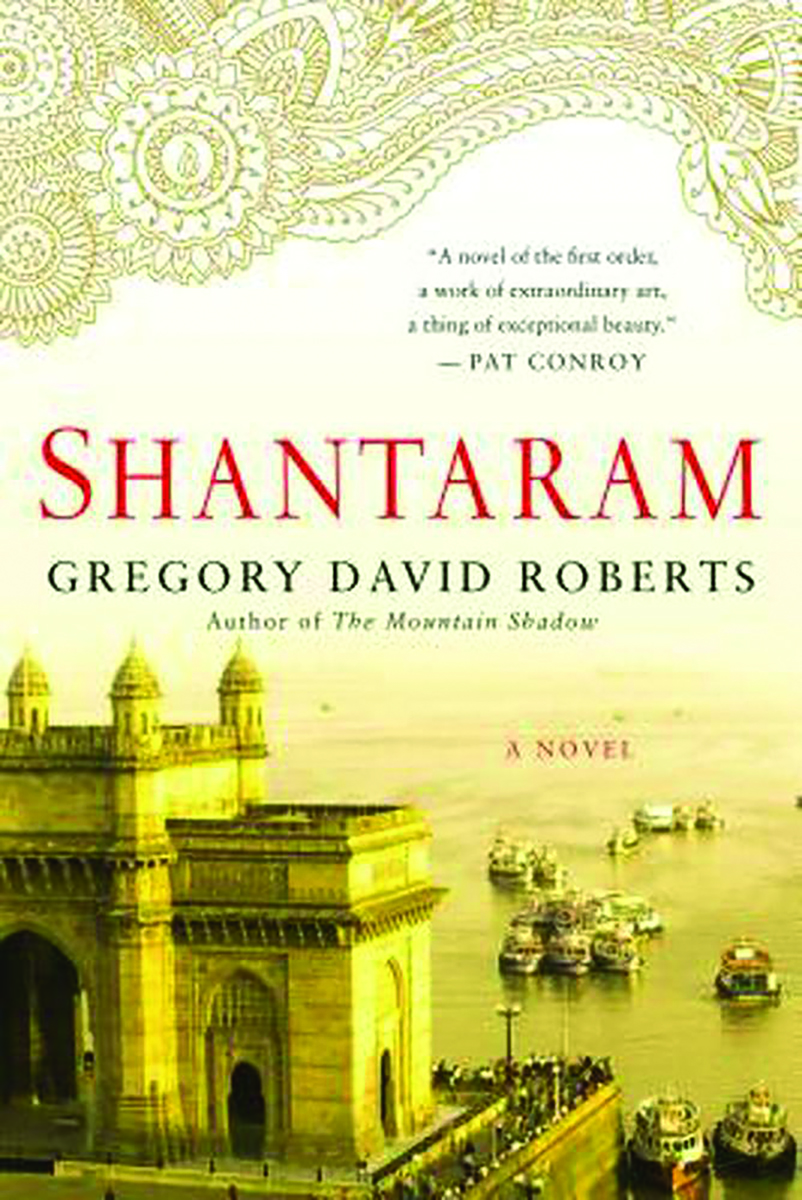 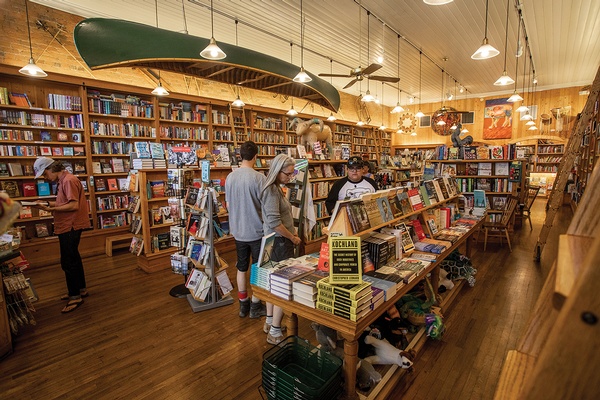 The famous canoe hangs from the ceiling in Maria's Bookshop at 960 Main Ave. Soon-to-be-former owner Peter Schertz admitted it might be the one thing he hopes his son, Evan, doesn't change about the business. But, Evan has said he has no plans to change much of anything – not even the paint color./Photo by Stephen Eginoire

Specials for anniversary week include:

• Get 15 percent off any of the books on the “35 Years of Favorites” list, which includes Evan’s recommendation of Shantaram by Gregory David Roberts

• With any purchase over $35, customers get a free book from the “special picks” shelf (of course, until they’re all gone)

• Stop by any morning during the anniversary week and get one of Barb Mills’ cookies (again, only as long as they last)

What: Meet the Author featuring Chuck Greaves, author of Church of the Graveyard Saints
When: Tues., Sept. 10, 6:30 p.m. Where: Maria’s Bookshop, 960 Main Ave.

What: Meet the Author featuring Jane Parnell, author of Off Trail: Finding My Way Home in the Colorado Rockies
When: Tues., Sept. 24, 6:30 p.m.
Where: Pine Needle Dry Goods, 858 Main Ave.

For more information about any of the upcoming events or deals, check out www.mariasbookshop.com