And the band played on
KSUT takes festival reins from FolkWest 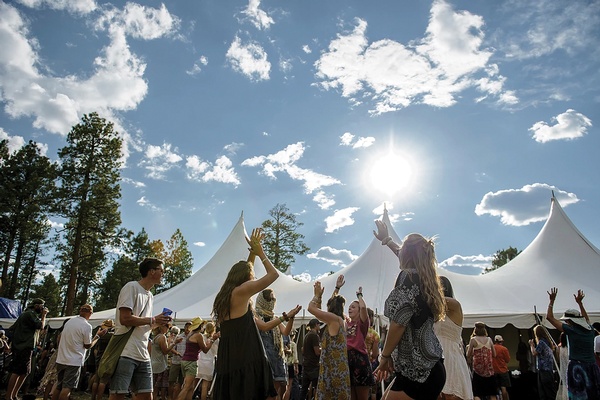 Festivarians get thier dance on under perfect summer skies at a past Four Corners Folk Festival. After 24 years, festival founders Crista Munro and Dan Appenzeller are stepping down and handing the festival over to KSUT./Courtesy photo by Michael Pierce

Local festivarians can breathe a sigh of relief and pack up the camp chairs, cooler, instruments and hula hoops. Two of the area’s most beloved music festivals will play on.

“It’s really exciting, people have been very receptive to the news,” Munro said Tuesday from her new home in Sisters, Ore. The couple moved to the small town about 15 minutes from Bend, Ore., in July after Munro took a job as director of the Sisters Folk Festival (which incidentally takes place the week after the Four Corners Folk Festival.)

She and Appenzeller will put on the upcoming Four Corners Folk Festival over Labor Day weekend and then gradually transition out over the next two years, remaining in consulting roles. Appenzeller will continue to do the booking while KSUT begins the search for a full-time festival director.

While the news may come as a surprise to some, the couple actually has slowly been transitioning over the last several years. Appenzeller went through cancer treatment several years ago, and the couple moved to the lower con-fines of Eugene, Ore., in 2011 for his health.

Since then, they have put on the FolkWest festivals from afar, with Munro taking on an increasingly larger role due to Appenzeller’s health. Eventually, she decided letting go of the Pagosa festivals and moving on was in everyone’s best interest.

“It’s hard to maintain relationships with sponsors and the community when you’re living 1,200 miles away and only there one month out of the year,” said Munro. “I finally said ‘I can’t keep doing this.’ We always said we wanted to keep it going, but when we thought it was hurting the quality of the festival, we began to think, ‘Who could take this over?’”

Last spring Munro reached out to friend (and Telegraph music columnist) Chris Aaland, a rabid festival goer who also is the development director at KSUT, about taking over the festivals. He ran the idea by his boss, Executive Director Tami Graham, and, well, it struck a chord.

“We wanted to find another nonprofit and KSUT was at the top of our list,” said Munro. “But we didn’t expect such an emphatic ‘yes!’”

Graham said when she brought the idea to the KSUT board, it was 100 percent in support of it. “We’re just thrilled” she said.

Munro said the timing couldn’t have been more perfect. When she reached out to KSUT, the station was toying with the idea of starting its own festival.

“It was almost like kismet – all the pieces starting falling into place,” she said.

“KSUT and FolkWest have had a very good relationship,” she said. “It just made total sense. The next natural step is for us to take these on and run with them.”

She said FolkWest is basically donating the festival and all its assets to KSUT – an acquisition valued at $600,000.

“We are deeply grateful to Dan and Crista,” Graham said. “They could have sold to the  highest bidder, but they knew that wasn’t what they wanted to do.”

Of course, Graham herself has some serious chops when it comes to putting on concerts. Before her latest gig at KSUT, she put on countless shows across the area through her company, Tami Graham Presents. At KSUT, she is responsible for orchestrating the annual Party in the Park (which drew 1,100 people last weekend) as well as KSUT’s other concerts.

“Tami is so involved and is such a community builder,” said Munro. “She’s so connected and that’s going to be good for the festival.”

And much to the relief of the thousands of people who attend each festival, KSUT has no plans to radically change the mix, said Graham. “There’s nothing broke,” she said. “There’s a reason it’s been going for all these years. They’re doing a great job.”

For its part, KSUT can also bring something to the table: namely more strength in landing sponsors and grant money for the festival. In turn, the festival will also help bolster KSUT’s fund-raising efforts.

In other words, win-win. Albeit a bittersweet one for Munro and Appenzeller.

When Munro moved to the area with two dogs fresh out of Penn State in 1994, she said she had no plans of starting a music festival. Instead, she started a graphic design business that also made copies, sort of like a Pagosa Springs Kinko’s.

“Then one day, a guy came in to make copies of a flyer for his bluegrass radio show, and it was Dan,” she said.

The two got talking about bluegrass music – and lack thereof – and the rest, of course, is local musical history.

“The goal always was shoulder season development,” she said. “Tourism at that time didn’t ramp up until the Fourth of July.”

The first Four Corners Folk Festival was a wild success, selling 600 tickets and drawing such big names as John McEuen and Nickel Creek (mere babes back then.)

“We had a pretty good line-up for not knowing what we were doing,” Munro said.

She said the festival experienced “meteoric growth” during its first 10 years. However, after droughts, rain and fires hampered a few of the festivals, they decided to hedge their bets with a spring festival as well.

“We felt like we were putting all our eggs in one basket, so we decided to have two festivals to bookend the summer,” she said.

And while the festivals continue to grow, it is at a somewhat slower pace. “Now there’s a lot of competition,” she said, referring to the assortment of other music festival that have popped up over the years. “The struggle is getting the numbers to grow and keeping people coming back year after year.”

Keeping the festival low key – a “festivarian’s festival,” as Aaland once put it – has been at least one secret to their success.

“We provide a different experience; we’re the mom and pop festival,” Munro said. “When you call the phone number, you get me or Dan picking up. We do so much in house, it’s really like an extended family. You don’t get that experience at Coachella or Bonnaroo.”

In fact, some would say it’s the anti-Coachella or Bonnaroo, which is just the way fans like it.

We want people to be rest assured that the festival will continue to be produced at the high quality they expect,” said Graham. “And to Dan and Crista, I just wanted to say thanks. It’s in good hands.”

What: 24th annual Four Corners Folk Festival
When: Aug. 30 - Sept. 1
Where: Reservoir Hill, Pagosa Springs
Tickets: Prices range from around $55 for single-day passes to $160 for 3-day passes with camping. Buy in advance at www.folkwest.com

Through the years: A look back at the FolkWest archives 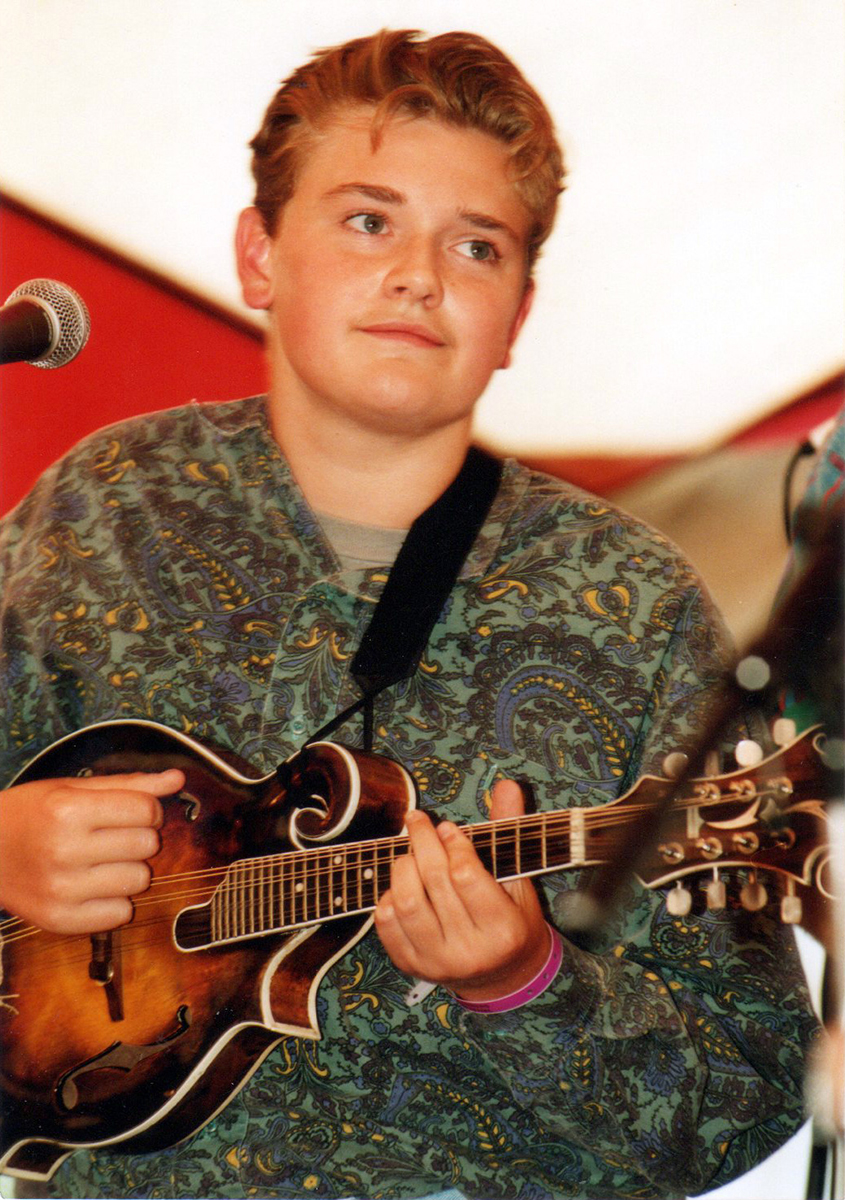 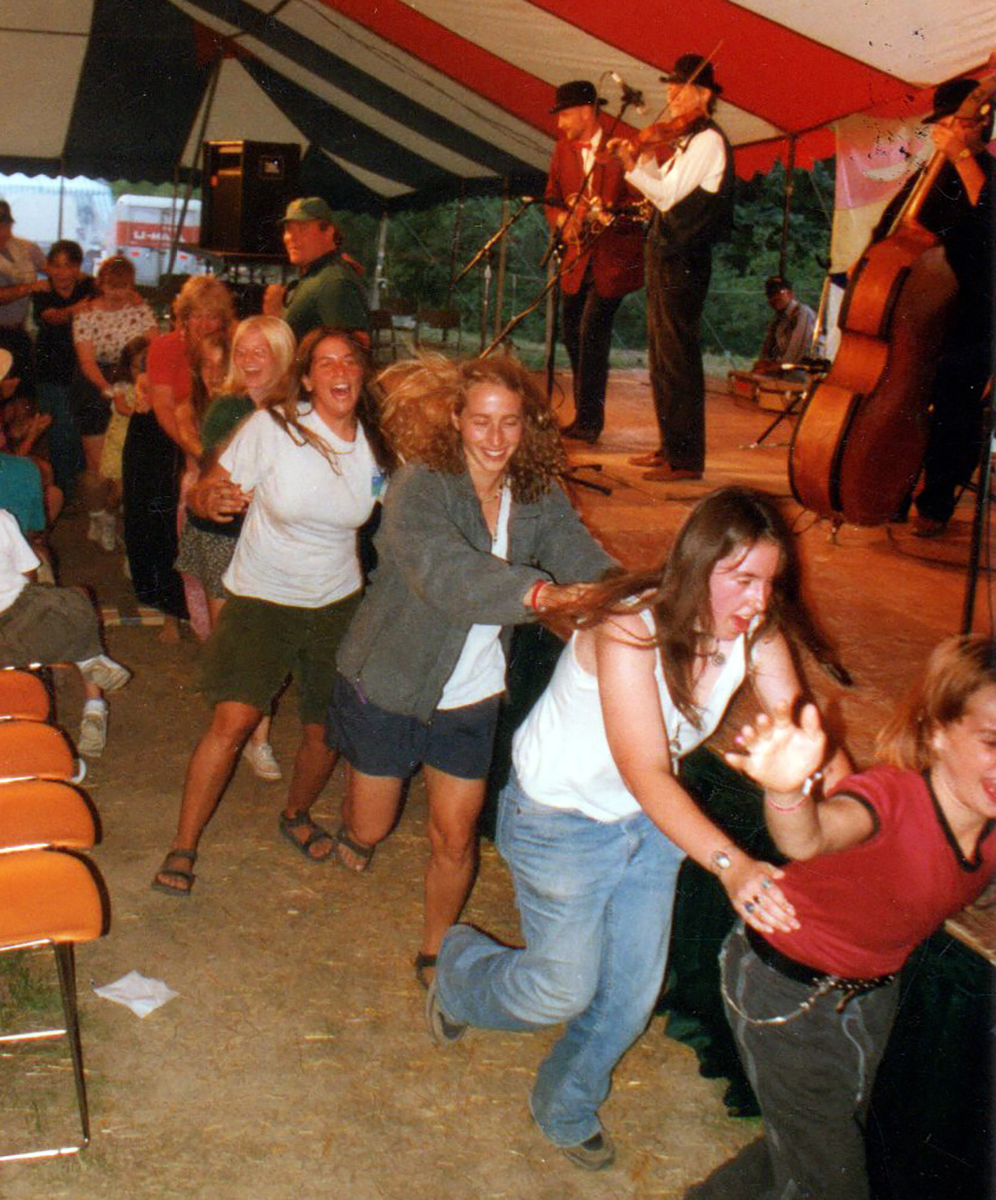 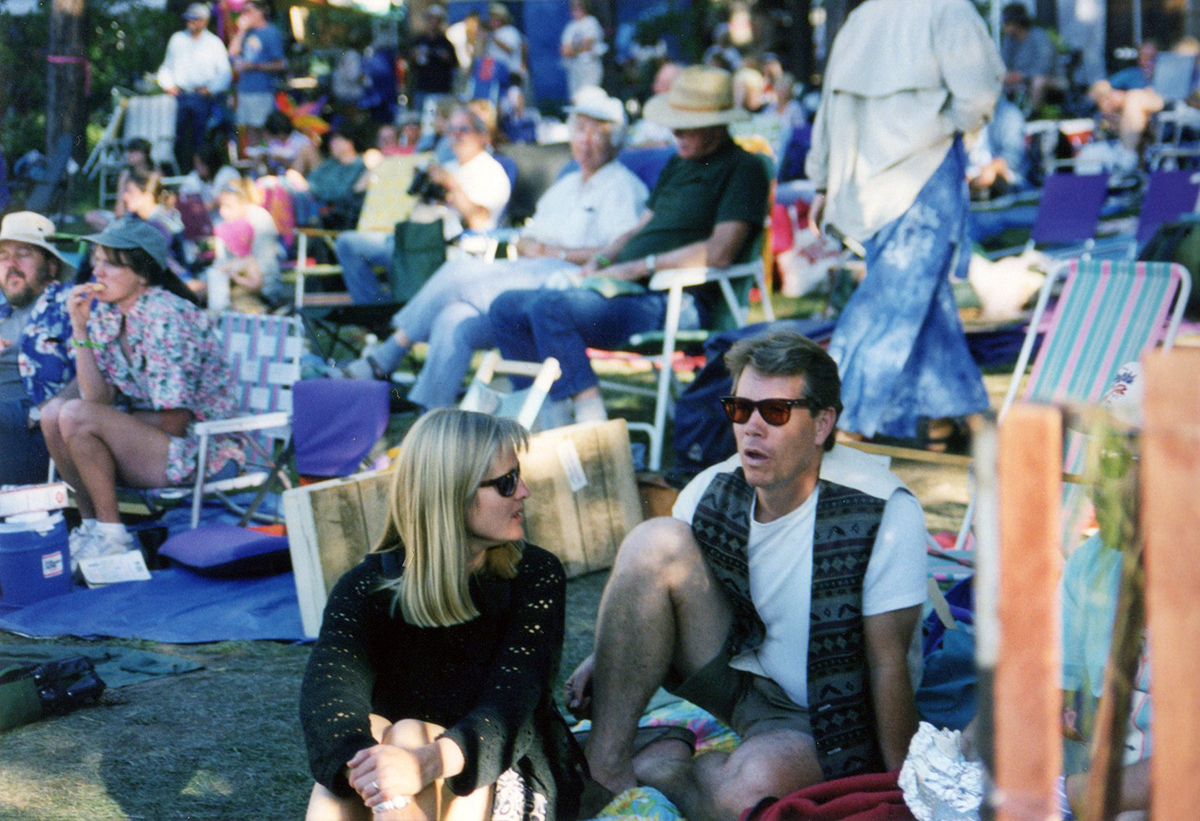 Crista and Dan, taking a rare break (and sporting some fine 1997 attire.) 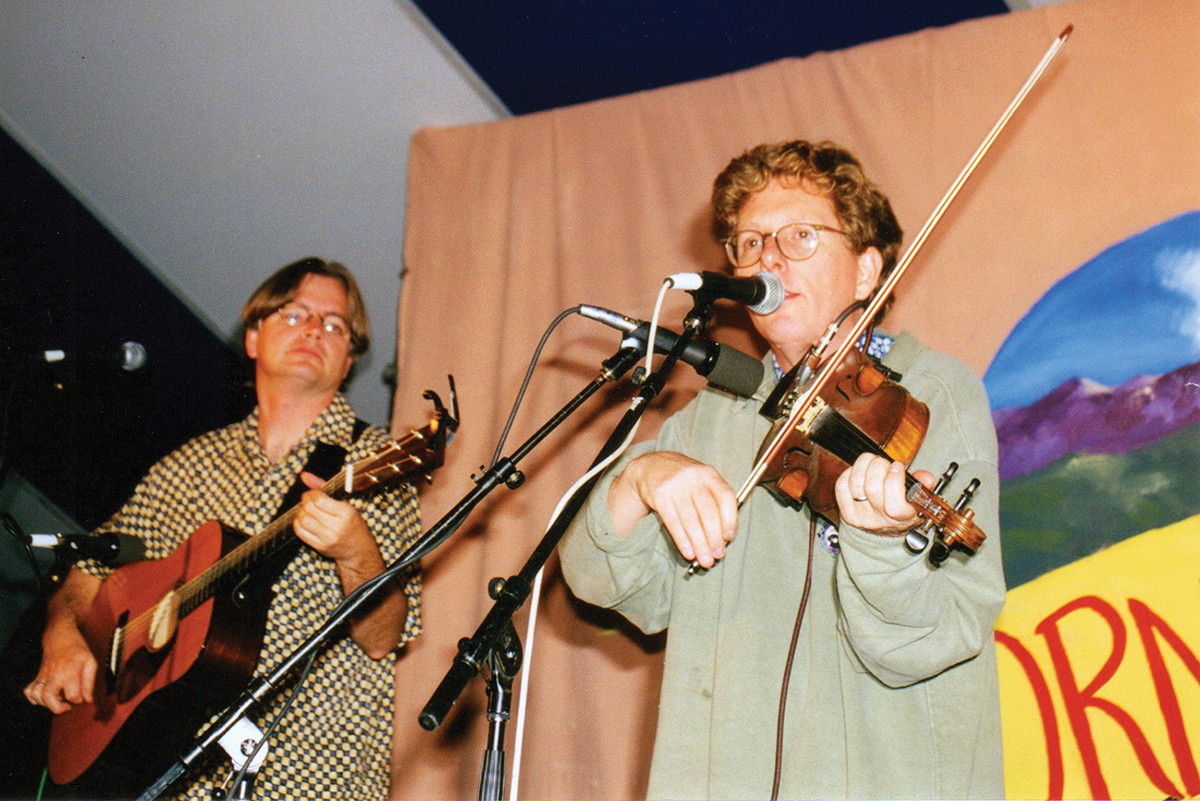 Going out with a bang: 2019 promises best line-up yet 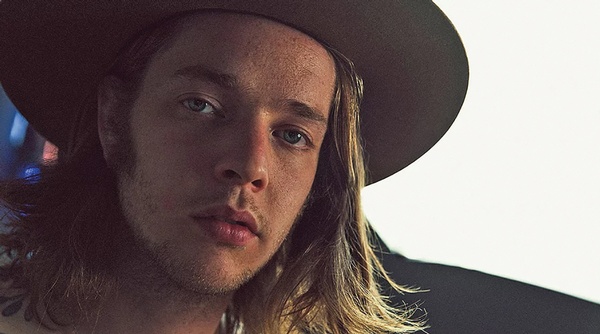 Although this will be the last year Crista Munro and Dan Appenzeller put on the festival they founded 24 years ago, the two are leaving on a high note.

“Our line-up is the best we’ve ever put together, and I don’t say that lightly,” said Munro.

“We’re going back to our roots this year, and that feels really good,” Munro said.

The festival is also featuring several young up-and-comers with names like Lindsay Lou, Wild Rivers, Arcadian Wild, the East Pointers and the Mammals.

And speaking of names, perhaps the artist Munro is most excited about has a name perfectly suited for his profession: Billy Strings.

“I saw him play in a hotel at a Folk Alliance conference when he was 17 or 18 and he was just phenomenal,” she said.

Originally from Michigan, the 27-year-old guitarist now calls Nashville home, where he is highly regarded as one of the best young bluegrass guitarists. His new album, “Turmoil & Tinfoil,” taps into a deep vein of psychedelia in Americana, referencing everything from the Dead to Sturgill Simpson.

“He’s on an epic rise right now,” she said. “Next year, he’ll be headlining Red Rocks.”

To see him closer to home – and at a much friendlier price – visit www.folkwest.com.