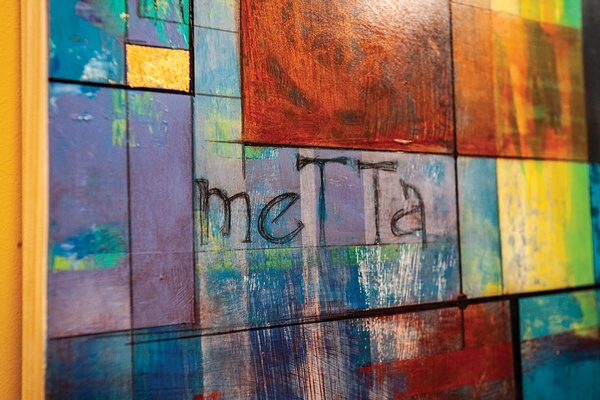 This painting by Carol Meckling is part of the Dharma Center's upcoming show, "Intention - Stillness - Activity," which opens downstairs in the center on Friday./Photo by Stephen Eginoire

Cho?gyam Trungpa Rinpoche (1939-87) is recognized as a preeminent teacher of Tibetan Buddhism and, in large part, credited with bringing the practice of meditation to the West. He was also an artist, referring to work created from an awakened state of mind as “dharma art.” So what better place to exhibit such enlightened art than the Durango Dharma Center?

“The purpose (of the show) is to honor and celebrate the talents of our artists, bring both our dharma community and the greater community together for a fun social gathering, and also raise funds to support the work of the Dharma Center,” Meckling, also a board member, said.

Meckling came up with the idea for a show upon realizing there was an underutilized space in the lower level of the center. She began to think about ways an art exhibit could benefit the center, as well as the artists and the community. As a result, she came up with the idea for the show, with proceeds from sales of the art being shared equally between artists and DDC.

The center had its humble beginning in 1991 when a group of locals began getting together regularly for meditation practice, meeting in various living rooms and rented spaces. As word got out, the group grew and gained official status as a nonprofit organization. With members numbering in the hundreds, it moved into its current spacious home near the library in 2016, where it hosts regular meditation sessions and dharma talks. (In its most basic sense, “dharma” refers to the teaching of the Buddha.)

“It is really a wonderful refuge for people. It’s very clean and calm and inviting,” fellow board member and Volunteer Communications Director Kate Siber said of the space.

Indeed, serenity is felt upon stepping into the center’s quietude and understated order. A surprise for a first-time visitor is the main hall, which incorporates seating for scores of conference and lecture attendees. The large space retains a calm and peacefulness one might come across in a Buddhist temple in the mountains of Tibet. At the front of the room are dozens of mats and pillows providing a more-than-suitable place to sit and just be.

As might be expected, the work in the exhibit also suggests peace and harmony, and each of the artists clearly fulfilled the show’s theme. They also mirror the words of Rinpoche: “A work of dharma art brings out the goodness and dignity of the situation it reflects; dignity that comes from the artist’s interest in the details of life and sense of appreciation for experience.”

The five artists featured in the show knew of each other and enthusiastically joined forces to pull together the show, which includes more than two dozen pieces. Although many works reflect the artists’ personal styles, there is the common thread linking them. Many of the pieces were created specifically for the show, but the artists admitted finding that some of their existing works, reflecting a Buddhist philosophy, were a perfect fit and also incorporated.

According to Meckling, the art for the exhibit speaks more to the process of making art – stillness, activity and ideas of impermanence – than the actual end product. “It’s about being in the present moment, appreciating the nature of things as they are,” she said. “And relating to the world with compassion, kindness, joy and equanimity.”

Aviks, a textile artist, said her work relates to the show’s theme in that she often uses repetitive “marks” in her work. “Each is made by hand with a needle and thread, therefore representing time and perseverance,” she said. “I am thinking about quantum physics, the buzzing of the universe, where there really are no edges and nothing stays the same; a rather Buddhist concept.”

In addition to her textiles, the broad range of mediums incorporated include water-based paints, printmaking, encaustic, papermaking and prints on silk. They vary in size from 6-by-6 inches to more than 6 feet in length. Most are semi-representational; subdued colors that will likely fit comfortably into any home de?cor. A few, Percell’s and Meckling’s for instance, include words written in Sanskrit.

Rinpoche, the master, used a mirror metaphor to describe the process of creating dharma art when describing the process, “First dharma art lesson is to look deep into empty space – like a piece of blank paper,” he advised.

He called this the “magic mirror” and went on to say if the artist looks deep enough, he or she will connect to the realm where everything that ever was, is or will be, already exists. Indeed, that is a powerful concept for anyone; artist or otherwise.

That the five artists serendipitously came together around the theme may seem remarkable, but Meckling remarked it was more than fate. Rather, the artists came together through the common connection they all share with art, dharma and meditation. “We have been trying to define or put into words what that is and to share more about it,” she said.

For more about the Durango Dharma Center, go to: www.durangodharmacenter.org 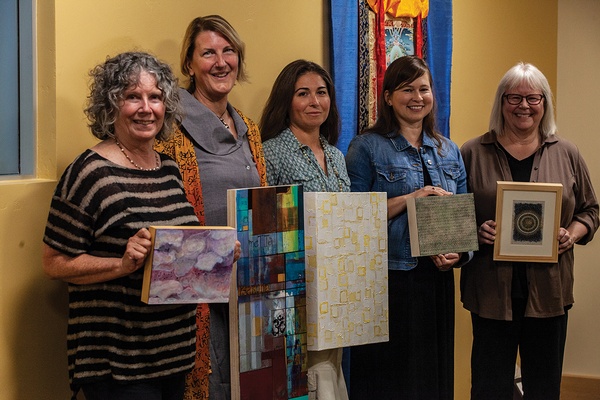