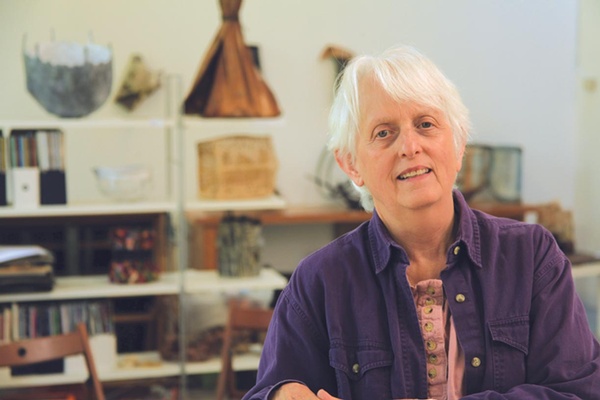 New York-based artist Pat Hickman brings her unique show, "Here, Still," to a joint show at the DAC Art Library and FLC Art Department Gallery. A native of rural northeastern Colorado, her upbringing figures into her unique artwork, which is made from discarded animal parts./Courtesy photo

Most visual artists source their materials at art supply stores or, nowadays, online.

Others might utilize found objects to create unique sculpture and assemblage. However, Colorado-born artist Pat Hickman might just as soon secure her supplies from a butcher shop or taxidermist’s lab. That’s because Hickman, a prominent conceptual fiber artist based outside of New York City, creates unique forms with none other than animal guts and hog casings.

“My dad cut meat in a grocery store in a small town in northeastern Colorado,” Hickman said, describing her initial interest in the medium. “People in my family hunt and fish, eating the meat they get.”

If it sounds a bit ghoulish or like a hobby of Hannibal Lecter, viewing Hickman’s art at her upcoming exhibit “Here, Still,” held jointly at the Durango Arts Center Library and FLC Art Department Gallery, will most assuredly change peoples’ perceptions. After all, bear in mind natural materials are not new to art. For centuries parchment, the primary surface used for writing, map mapping and drawing as well as for drums, was made from animal skins. And guts, i.e. intestines, were once used for stringed instruments and even tennis rackets.

Hickman said her introduction to entrails as art began in 1977 while she was teaching a textile course at University of California, Berkeley. While preparing her curriculum she came across an Alaskan parka made from animal intestines. “I was deeply moved by the idea that an inner membrane could be an outer protective garment,” she recalled.

Despite their origins, Hickman’s creations are fascinating to look at and bear little resemblance to innards.

Indeed, her work, large scale and small, is profoundly metaphorical in its finished state.

“What (Hickman) has created with gathered organic materials, paint, pork gut and thread is a transformative space,” former DAC director Leslie Madigan, a long-time friend of Hickman’s, recently remarked. “By building these spaces, the objects create an inner dialogue and language amongst themselves.”

The DAC Library’s smaller space lends itself to exhibiting 20 of Hickman’s more diminutive works while 22 of her more expansive pieces will be on view at the FLC Art Gallery.

“The scale I work in and the materials I use are determined by what I am trying to express in each piece,” she said, explaining her wide variation in sizes. “I prefer to work without considering constraints of size though, of course, gallery size determines what can be exhibited in any given space.”

Her largest pieces are pure installation art, spread out, hanging, assembled; works measured in yards rather than inches. Often, they entail dozens of bits and pieces displayed in such a way as to create an environment

of their own. Swirling, draping, piled and stacked, they seem to recall a world of fossils uncovered at some remote archeological dig. Although the art combines elements such as silk and thread or other material, the primary ingredient was once part of a living animal.

According to Hickman, the sections of translucent gut she uses are meant to not only provide structure to her work, by convey meanings of loss, emptiness and mortality. “The filament of membrane is essential in life, extending on into an afterlife both comforting and troubling,” she writes on her website.

At the same time, however, the works are also about new life and giving birth to new ideas. “For me, expressive power resides in this animal material, so close to life,” she said. “As an artist, I have the chance, the hope, of transforming my materials into visual metaphors, making some-thing new.”

When it comes to finding a muse, the artist said she often looks to the locations where she has lived, worked and exhibited. “These places have brought me my recurring themes: cycles and seasons, memory and loss, aging and mortality,” said Hickman, who taught for 29 years at various colleges in northern California and Hawaii. “As the decades gather behind me, a cascading of time demonstrates itself in my work. I respond to where I am and that shapes what I have to say, both the materials I employ and the ideas I express.”

Reflecting on the name of the FLC and DAC shows, “Here, Still,” and why it is appropriate, Hickman admitted, “Though I move geographically, I take with me the cumulative experience of many places; some what like tumbleweed, rolling across the prairie.”

For the educator side of Hickman one of the key attractions for coming to Durango was the opportunity to offer a two-day workshop. In the program, participants will explore visual ideas through openwork textile structure, including knotted and knotless netting. Hickman said participants also will focus on reserving space for air and

the importance of what is “not there.” She acknowledged the procedures will be broken into both two and three-dimensional quick studies and projects with a variety of materials – yes, including hog casings.

As far as the use of natural animal products go, Hickman is not alone. For DAC Education Director Sandra Butler, also a mixed-media artist, natural and organic materials, particularly rawhide, are a hallmark of her unusual sculpture. Originally working in fiberglass, Butler said she was forced to look for a new medium due to its toxicity. “I discovered rawhide about 15 years ago and began exploring its unique traits,” she said.

Butler didn’t stop there and found that she could incorporate other natural (and eventually decomposable) materials such as sand, salt and horsehair, which added to her works’ organic nature. “I appreciate the idea that my work is biodegradable and not a permanent object, like everything else in the living world,” she said.

As billed, Hickman’s workshop is less a “how to” than an experience in discovery and learning new ways to create. For non-artists, no previous knowledge of textiles is required, only a willingness to explore and learn. The workshop, alas, is sold-out.

Fortunately, appreciators of art can still get an up-close look at her works in “Here, Still” while it’s still here, through Oct. 6 at FLC, and Oct. 28 at the DAC. 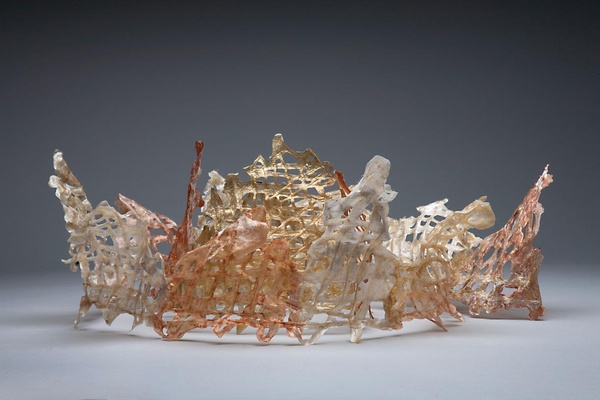