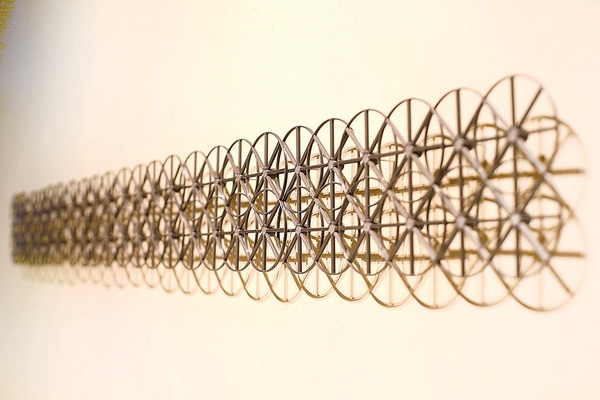 Exhibits in the upstairs library at the Durango Arts Center are, by virtue of its tiny space, intimate and concise. They also provide an opportunity to experience some of the region’s most fascinating art. When Jay Dougan, Fort Lewis College associate art professor, was first invited to exhibit there he was unsure what he would present.

Originally from Michigan, Dougan received his BFA from Western Michigan University, outside Kalamazoo. He later earned a master’s degree from the University of Notre Dame and became an instructor at the Herron School of Art and Design in Indianapolis. He eventually relocated to Durango nine years ago to teach at FLC.

Inspired by natural forms and structures, the environment and industrial objects, Dougan has won awards on a national level and in 2011 received the FLC New Faculty Teaching Award. In addition to Colorado, his work has been exhibited in Indiana, Florida, Wyoming and California.

Along with his position at the FLC, Dougan may be best known locally for “Card Catalog,” a 2008 commissioned installation piece that graces the main stair- way of the Durango Public Library.

The content of the sculptor’s current show began to take shape sometime after the arrival last year of a new piece of equipment in the FLC Art Department: a TAZ LulzBot 3D printer. In the simplest of terms, a 3D printer translates a drawing into a fully dimensional object. While the technology has been around for years, it was not avail- able at the college.

As a sculptor, Dougan is comfortable and adept at working with three-dimensional art; he also has an affinity for drawing and practices precision-like draftsmanship. Previously using tools more familiar to engineers and architects, he enthusiastically made the transition to the 3D printer. Em- bracing the new process, he immediately started exploring the potential of the equipment. Now almost a year into it, he admits, “I’m not done learning, and I am excited by what lays ahead.”

Beginning with traditional drafting tools, Dougan created circular and geometric configurations looking very much like designs produced with a Spirograph, the 1960s drawing toy based on plastic gears. The concept for the present DAC show began to formulate in his mind, and as the “wheels” started to turn, he produced a series of small plastic components and then replicated  each of the resulting pieces numerous times. When he completed one set, he altered the pattern and shape and produced a new series until there were enough variations to fill the walls of the exhibit space. The individual pieces, which are relatively small, were joined together using filament, pins or other contrivances and then fashioned into large wall panels. The resulting assemblages are structurally fractal in character and, other than the fact they are in varying shades of gray, appear almost kaleidoscopic when grouped together.

The panels are intriguing on a number of levels, not the least of which are their negative/positive relationships and the shadows that appear behind them. In fact, the shadows were well thought out and Dougan explored the position of the overhead lighting in order to maximize the affect.

Adding to the substance of the exhibit, Dougan produced a series of shapes reminiscent of tractricoid spinning tops (viewers of Leonardo DiCaprio’s movie “Inception” will recognize them). He clustered them to- gether and placed them on the cabinet counters, some in pairs, and others in groups of four or five.

Not abandoning his ceramic or pottery skills, he also included several tall, cylindrical vases. One is a stand-alone piece paying homage to the engineer’s compass; the other is a set with images of a wind turbine as a focal point on each. The vases share stark black finishes with a contrasting white illustration, which was applied using vinyl transfers. The windmill is a recurring theme for Dougan; an attraction based on their scale in relation to the surrounding landscape as well as their pristine, functional configuration. Considering Dougan’s affinity for the environment it is understandable. “I see them as kinetic sculpture,” he remarked, “and feel their energy.”
The FLC Art Department is also home to a digital die-cutter, which enables material, such as vinyl, to be cut into intricate, complex shapes and patterns. “It would normally take hours and lots of X-acto blades to cut designs like that,” explained the artist. As a teacher, he immediately recognized the ease with which his students adjusted to the new tools. “It is a relatively intuitive process,” he remarked. “Software, computers and digital technology are second nature to them.”

Chad Colby, the department chair, agrees with Dougan when it comes to student potential with the new devices. “I’m eager to see how students adapt the 3D printer to their work,” he said. “Both ma- chines evoke a sort of drawing activity.”

To ensure that the college stays on the cutting edge, so to speak, Colby remarked, “I’d like to see us acquire a laser cutter. They have so many exciting applications in the creative industry.”

Colby went on to acknowledge Dougan’s vision and what he brings to the department. “I’m impressed by his courage to explore new territory, and I think the students respond to that as well.”

The specialized equipment is available to all sculpture students from foundation level to upper class, and Dougan encourages them all to find something engaging. “I want them to explore and to take risks,” he suggests. It is an approach to education that can only produce broader thinking, expand the base of knowledge and push the artistic envelope. 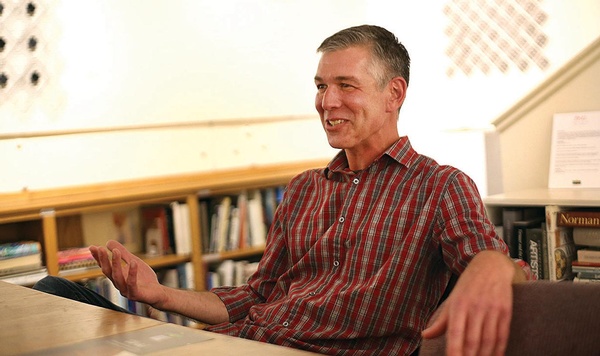 What: A 3D Production - New Work by Jay Dougan
Where: DAC Art Library When: Through Dec. 23