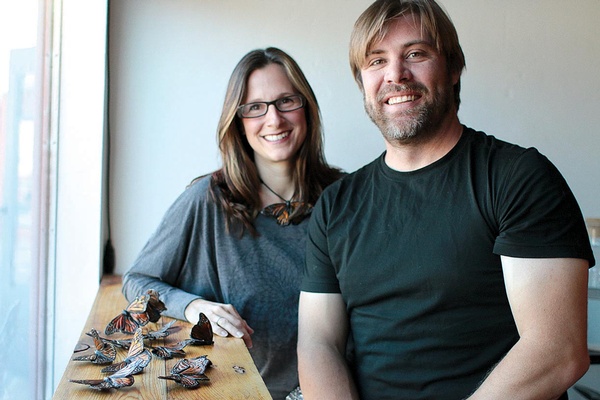 Allison Leigh Smith and Bryce Pettit pose with just a few of the more than 1,000 bronze butterflies they crafted for their award-winning exhibit, "Butterly Effect."/Photo by Jennaye Derge

Every fall for the past eight years, hundreds of thousands of art lovers descend upon Grand Rapids, Mich. For 19 days, the city is the epicenter of the ArtPrize exhibition, where art from around the world is on display in over 160 venues throughout the downtown area.

For the almost 1,500 artists who enter, the appeal goes beyond the enormous exposure: there is $500,000 awarded in prizes and $280,000 distributed in grants to artists, curators and educators. With those kinds of numbers, plus the global recognition, it is no wonder that two artists from Durango chose to enter.

Bryce Pettit and Allison Leigh Smith recently returned from ArtPrize, where their work, “Butterfly Effect” not only earned entry, but took home the top prizes for “best installation.”

The two moved to Durango a couple years ago after meeting at an art show in Scottsdale and falling in love. They decided Durango would be the best place for them to live and work and have already made a mark on the local art community.

Pettit is a bronze wildlife sculptor with a background in biology who is represented in over 10 galleries nationwide. His sculptures range in size from diminutive to enormous and can be found in public spaces, libraries and even the

Tulsa International Airport. Smith won “Best of Show” in both the 2015 Durango Autumn Arts Festival and the 2016 Durango Arts Center Juried Exhibit. She has an extensive background in museum curating, textile design and fine art.

As its name would suggest, “Butterfly Effect” is a large- scale, bronze installation that centers on the fragile yet majestic winged creatures – 1,234 to be exact. “People really connect with butterflies,” said Smith. “The monarch butterfly is a symbol of joy, remembrance, beauty and hope.”

When the two began working on the piece in early 2015, they fabricated just a few at a time; each approxi- mately the same size as a real monarch. The artists then rubbed each one individually in order to bring out the natural bronze color.

In order to produce the complex work, they utilized the “lost wax” casting method, also known as “investment casting.” In briefly describing the painstaking process, Pettit said the artist first sculpts a piece out of clay and a silicon mold is formed around the clay. When completed, in 10 days to two weeks, the mold is cut open and the clay is removed and discarded. At that point, the hollow silicon is re- assembled and hot wax is poured into it and allowed to cool. Once finished, the process continues to yet another phase, eventually yielding a ceramic shell that is then fired in a kiln; each butterfly having its own ceramic mold. Along with tempering the ceramic, the wax is melted out of the shell, hence the name “lost wax.”

In the final stage, molten bronze is poured into the ceramic shell and left to cool. The ceramic mold is then shattered, yielding a cast bronze replica.

A patina, not paint, is applied to the bronze surface using a wide variety of polishing, torching and chemical techniques to create the desired iridescent finish. Once completed, the entire sculpture is coated in a thin layer of clear wax to protect it. For the installation, the entire process had to be repeated over 1,200 times.

The ArtPrize installation was equally complex. All 1,234 pieces had to be laid out specifically for the location, taking into ac- count where lighting would be and where people would stand to view it. After map- ping it out and labeling each butterfly, Smith and Pettit had to drill 800 holes in plexiglass to mount and hang them.

For the two artists, the total work is an artistic impression of the monarch migration phenomenon. “We chose the (sequential) number of 1,234 because it shows growth, and we called it ‘Butterfly Effect’ because small action grows into large effects.”

Pettit and Smith gave away milkweed seeds throughout the week to help with Michigan’s declining monarch butterfly population; milkweed being the host plant for monarch caterpillars. Upon being accepted into the exhibition, they were as- signed the DeVos Place Convention Center in Grand Rapids as their venue. Pettit said it took five days and more than 100 hours to install the piece.

Achieving notoriety for their art and their cause is a big achievement, yet winning one of the prizes is clearly a big goal too. “If you want to really shine (at ArtPrize),” said Pettit, “You have to bring your A game. You have to bring something universally appealing that resonates with many people on many levels. Fabricating so many handmade butterflies felt nearly impossible, so we knew if we could pull it off, it would be pretty great.”

In the closing days of the voting, the couple had made it into the top 20 candidates, and Pettit assessed their chances of a win. “It’s a beautiful idea, professionally executed, with a positive message,” he mused. “The (real) butterfly effect is a scientific theory that implies a little action can cause an enormous reaction. That’s what we hope to do, cause an enormous reaction. I think we have a chance.”

Indeed, the reaction Pettit and Smith received from the public was outstanding, landing them in the top four of all entries at ArtPrize. Although they did not win the grand prize, they

received $12,500 for best installation.
This November, locals interested in seeing the Butterfly Effect, albeit on smaller scale, can visit Bedhead Coffeehouse on Highway 3, where the artists will install a grouping of the bronze beauties. According to Smith the exact number, “Depends on how much weight we can suspend in the shop!” 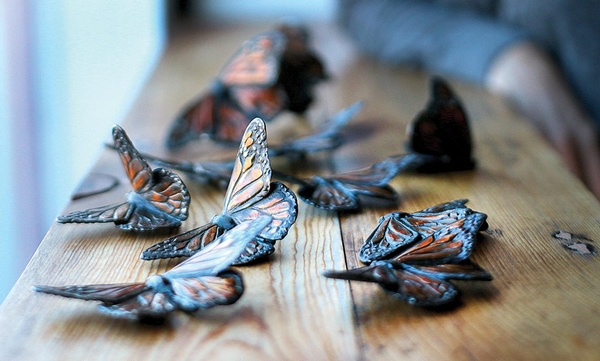