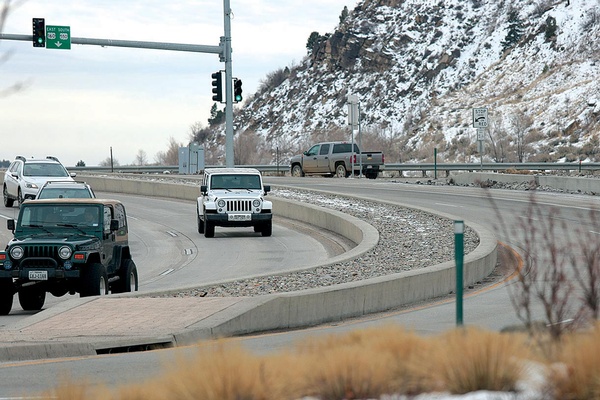 Thanks to a National Endowment for the Arts grant, the City of Durango is looking to gussy up the median strip on 550/160. Three finalists have been selected and residents can weigh in on their choice through Feb. 23./Photos by Jennaye Derge

As witnessed by Durango’s “Arc of History” debacle, most locals know how divisive public art can be. In general, all art is subjective, so when taxpayer money is being spent or town beautification projects are involved, it is a safe bet there is going to be controversy.

To minimize argumentative discourse, the City of Durango and the Durango Public Art Commission decided to take its next big project to the populace for input.

Following its successful application and receipt of a $25,000 grant from the National Endowment for the Arts, the city put out a call to artists to submit concepts for a community art project. The chosen design is to be installed along 600 feet of the dividing medians at the 550/160 intersection. What will separate this from other public art projects is the goal of involving the entire community in the process to collaborate with the artist.

As stipulated in the NEA grant, the city had to match the monetary award, and the money will be used for artist compensation and ancillary costs. However, because the scale of the project is so large, the city plans to apply for an additional $25,000 from the NEA and match that amount, as well. The newer total would include a $30,000 stipend for the lead artist and materials, installation, traffic control and community out-reach, the latter of which may prove the trickiest. With no lack of creative talent in La Plata County, 15 artists responded to the request for proposal. The selection committee was comprised of representatives from Durango High School, CDOT, the Mayor’s Youth Advisory Commission, Fort Lewis College, the Durango Arts Center and Public Art Commission. Choosing the finalists, the committee had to consider numerous elements, including community engagement and the ability of the artist to create a design befitting the unusual space while reflecting our unique environment. The artist also had to show a demonstrated ability to complete the project.

The committee was asked to narrow the choices to three, which would then be presented to the public at several venues around Durango where the artists would be present to describe and illustrate his or her ideas. The public is being asked to cast its vote for their preference among the three designs. Residents can vote through Feb. 23 on the city’s website, www.durangogov.org, by clicking on “Virtual City Hall” at the bottom of the page. Images of the three concepts plus descriptions of the work and how the artist will involve the community are also included on the website.

When judging art, a juror or selection committee is faced with some tough decisions, and it is understood they will rarely please everyone. As might be expected, debate has already developed over the competing proposals. Some townspeople issuing statements of disagreement preferred designs by artists not chosen for the final round.

The three finalists, Bryce Pettit, Allison Leigh Smith and Cindy Miller Atchison, are all Durango residents and each received a $500 stipend to help navigate the public presentation process. Although Pettit and Smith submitted separate design concepts, readers may remember them from a 2016 Telegraph article, “Hail to the Monarch” (10/27/16) about their winning of the ArtPrize exhibition in Grand Rapids, Mich. The third competitor, Atchison, is founder of the local graphic design firm bearing her name.

The concept proposed by Atchison is called “And the River Rolls On” which she describes as, “a series of 26 8-x-

4-foot oxidized steel waves etched with symbols and embellished with mosaics representing our community values.” She commented that the “waves” are positioned so passing drivers will sense the river flowing during the 600-foot-long sculpture experience.

Asked why she submitted a proposal Atchison said she’s always valued public art. “It reflects a community’s consciousness, motivates creativity and generates conversation,” she said. “I realized how many people in our community were equally passionate about embracing this project! Durangoans’ enthusiasm encouraged me to submit a thorough, thoughtful proposal.”

Pettit titled his concept “Coexistence” and defines its main feature as “a variety of native, life-sized animals sculpted in bronze relief.” On the concave side of each will be shapes highlighting different cultural aspects of our community; items representing recreation, jobs and local history. “Connecting these animals will be beautiful boulders to represent mountains and waves of bent steel to symbolize our river,” he said. Pettit is no stranger to public art having pieces in eight states around the country. Smith states that her creation will be made of “Beautiful, quirky, traditional and fun narrative patterns.” Each pattern will be laser-cut from metal screens and framed along the two roadways. She anticipates people will contribute artwork expressing what they love about Durango.

“As a local and as an artist, I had an immediate response to what kind of art I wanted here,” she said. “I want it beautiful, but not distracting. I want it reflective of our town’s awesome diversity. I want art that won’t trap wildlife if they find themselves in the road.”

Later this year when the vote is tallied and the winner chosen, collaborative workshops and fabrication of the design are expected to commence and will likely continue into 2019 before being unveiled and installed.

Hundreds of residents have already voted for their preferred concept, and if you haven’t registered your vote, you still have until Feb. 23. In the unlikely event of a tie, the Public Art Commission will select the winning piece.

Residents can vote for their favorite sculpture proposal through Feb. 23 by going to duranoggov.org and clicking on the “Virtual City Hall” tab at the bottom.