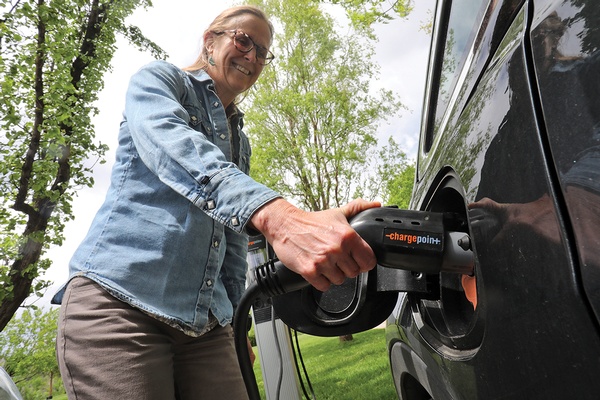 Sarah Kelly, a member of the Durango Electric Vehicle Enthusiasts, plugs in at the Smiley Building in downtown Durango. Over just the past few years, Durango has gone from just a couple charging stations at the Transit Center to several located all over town./Photo by Stephen Eginoire

Summer is finally descending on the Southwest, and most residents are ready to hit the road. Some, however, are still a little hesitant.

“One of the biggest questions I often hear is, ‘How far can you get?’” Sarah Kelly, who helped form the Durango Electric Vehicle Enthusiasts, said. “There’s a lot of misinformation and doubt out there.”

Many owners of electric vehicles, or EVs, suffer from something called “range anxiety,” which is the fear they’ll run out of battery power before reaching the next charging station.

It’s not a concern when running errands or commuting to work, but hitting the open road has been a different story. At least, until now.

The roadblocks that have kept EV owners close to home – mainly infrastructure and battery power – are coming down, and they’re coming down fast.

Within the past few years, Durango has gone from having a couple charging stations at the Transit Center downtown to having ones at Mercy Regional Medical

Under the state’s Charge Ahead program, which helps fund up to 80 percent of installation, the City of Cortez, Fort Lewis College, Ignacio Community Library and Wolf Creek Ski Area could all be next.

Laurie Dickson, executive director of 4CORE, said the plan is to have fast-charging stations installed about every 75 miles along all of Colorado’s major roadways.

Telling EV owners and others about the dramatic increase in infrastructure is one thing, but having them hear about road-tripping first hand is another.

With that in mind, the Durango Electric Vehicle Enthusiasts are hosting “Road-tripping Without Gas in 2019: Benefits and Drawbacks of EV Road Trips” at 6:30 p.m. Mon., June 10, at LPEA headquarters in Bodo Park.

One of the club’s members, who owns a Tesla, will talk about his recent experience on the road, offering insight and answering questions. Kelly said the club plans to have another event this summer featuring members who own other EV models, like the Chevrolet Bolt or Nissan Leaf.

Even just a few years ago, the number of electric car models could be counted on one hand. Today, there are almost 50 models, and manufacturers are turning their attention to developing trucks, SUVs and other types of utility vehicles. The options for consumers are growing exponentially.

Dickson said by 2025, it’s estimated that 20 percent of vehicles in Colorado will be electric.

And, it’s not just shaping decision-making for consumers at the dealership, she added. Developers are starting to include charging stations in parking lot design, and municipalities are talking about their potential impact on building codes.

It turns out, the biggest boon to EV infrastructure was a scandal.

Back in 2014, the Center for Alternative Fuels, Engines and Emissions at West Virginia University conducted emissions tests on two Volkswagen models and one BMW model. The original intention was to prove how effective new technologies for diesel engines were at reducing carbon emissions.

But, the center instead discovered something else in the VW models.

It turned out Volkswagen had installed software in their diesel cars called “the switch.” When the VW was tested for carbon emissions, it would trigger the software to change the engine setting to reduce emissions. When the car was on the road, however, the engine would operate normally, spewing out 20 to 35 times more carbon emissions than regulations allowed.

As a result of the scandal, some VW executives resigned, others are still facing criminal charges, and the company was forced to pay $4.3 billion in penalties in the United States. A portion of those funds were used to create Electrify America, a new arm of VW responsible for building and maintaining a public EV charging network. The remaining funds were distributed among the states, including Colorado, which received $68.7 million.

Much of Colorado’s settlement money has gone to building up the state’s electric vehicle infrastructure through grant programs like Charge Ahead.

There are three types of universal charging stations: Level 1, Level 2 and fast-charging. The difference between these types is how long it takes to recharge a vehicle. Most of the stations available on the road today are Level 2, which give enough power for an EV to travel about 10-20 miles for every hour spent plugged in, while Level 1 only charges about 2-5 miles for every hour.

The funds from the VW settlement are being used to install only fast-charging stations. These allow an EV to go about 60-80 miles after just 20 minutes of charging.

Kelly pointed out that EV owners need to make sure the station they’re looking to stop at is the right one for their model.

As much as the growing popularity of electric vehicles is changing other industries, Kelly said the real growth will happen at the dealership.

“I think that’s where we’re going to see some growth,” she added.

As soon as someone gets in an electric vehicle and drives it for the first time, she explained, they’ll likely never go back to gas-powered vehicles.

The cars are quiet but quick, surprisingly good in the snow and require little maintenance.

“I was just surprised how easy it was to own,” she said. “Even the cheapest ones are a pleasure to drive.”

With new charging stations popping up all over the country and improved battery technology, more and more EV owners are ready for the long haul.

What: Road-tripping without gas in 2019: Benefits and drawbacks of EV road trips today
When: 6:30 p.m. Monday, June 10
Where: La Plata Electric Association headquarters, 45 Stewart St.
More info.: To find out where charging stations are located around Colorado and country, go to www.plugshare.com

Trip down memory lane: Electric vehicles are nothing new

The first electric vehicle actually hit the road in Europe almost 200 years ago. In 1832, a primitive version was built in Scotland, and by the 1870s viable models started showing up on the streets of England.

It wasn’t until the late 1880s that the first battery-powered carriages were seen in the United States.

By the turn of the century, however, electric vehicles had become so popular they made up one-third of all vehicles on the road. Thomas Edison was even working to improve battery technology, and the founder of Porsche had already invented the first hybrid motor, which ran on battery power and gas.

Then, Henry Ford entered the picture with the Model-T.

Mass production suddenly made cars affordable to the masses, and the new gas-powered Model-T was the first nail in the coffin for electric vehicles. The internal combustion engine ended up ruling the roadways for most of the 20th century – until the oil and gas crisis of the 1970s.

After waiting in line for hours for a chance to fill up at the gas station, people started to think about alternatives, and the electric vehicle re-entered the public realm.

Once the crisis faded, cheap gas-powered vehicles and a lack of infrastructure made it hard for electric vehicles to carve out a lane in the automotive marketplace. But, with regulatory changes and a new model released by General Motors in the 1990s – one that looked like something James Bond would drive – the tide began to turn.

By the early 2000s, Toyota’s Prius electric hybrid was available worldwide, Tesla was all the rage among Silicon Valley elites, and the federal government was backing electric vehicle development in the lab and at the bank.

Today, new models are emerging every year from Chevrolet, Nissan, Toyota, Ford, Fiat, Honda, Hyundai, Kia, Tesla, BMW, Jaguar, Mercedes and more. In addition, new fast-charging stations are popping up almost weekly. It may have taken two centuries, but it seems electric vehicles are back in the fast lane.