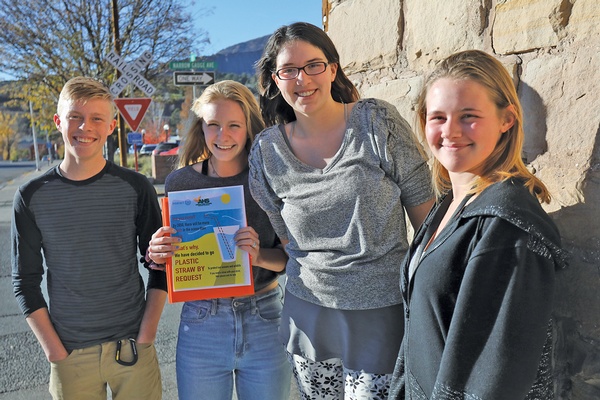 Animas High Interact students, from left: Nick Austin, Greta Cahill, Saige Fogarty and Jaylnn Nicoly. The students have started a campaign to get local restaurants to stop or reduce their usage of plastic straws and educate the public on the evils of single-use straws on the environment./ Photo by Stephen Eginoire

Students in the “Cultivating Cultural Capital” class at Animas High School have a modern take on the concept of the ripple effect: the “ripplegram.”

“It’s kind of like getting back what you gave,” junior Jaylnn Nicoly explains.

It also illustrates the way even the smallest action can have far-reaching effects – something a group of students is hoping to accomplish with its latest endeavor.

Nicoly is a member of Animas High’s Interact Club, a Rotary-sponsored community service group for teens. She joined the group last summer after hearing of its latest effort: tackling plastic straw usage, a cause near and dear to her heart.

See, like 33.1 million others, Nicoly watched a video about a sea turtle. Yes. That video. In case you haven’t seen the 2015 viral sensation, it entails marine biologists removing a plastic straw lodged up a sea turtle’s nostril. (If the video – which employs heavy-duty pliers and putting the endangered reptile in a full-nelson – doesn’t leave you in tears or enraged, or both, congratulations on your cold, black heart, Grinch.)

Rest assured, as if sea turtles don’t have enough to worry about with extinction and being at the low end of the food chain, this one happily recovered and was released back into the wild. Likely breathing a lot easier. Animal lovers and advocates for the environment, however, were not. The video soon became a rallying cry against plastic, most notably the evils of single-use straws, which are handed out will-nilly at drive-thrus and restaurants throughout the United States to the tune of 500 million a day. (All so you don’t have to take the lid off your drink or lift a plastic cup to your lips. Alas, I digress.)

Animas High junior Greta Cahill was among those 33 million who saw the video as well. As a long-time member of the school’s Interact Club, she decided to do something about it.

“Last spring, we started looking at plastic straw usage in our community,” she said.

The plan was to approach restaurants about usage of plastic straws and encourage them to look for alternatives or, at the very least, furnish them only upon request. The students also planned to raise awareness on the issue with student outreach and flyers around town.

But to advance the cause, the students couldn’t just hold up their iPhones and show the turtle video. They needed cold hard facts.

“We did a lot of background research,” fellow Interact member, sophomore Nick Austin said. “By 2050, there will be more plastic in the oceans than fish. Thirty percent of all sea birds or turtles will ingest plastic, and 50 percent of them will die from it.”

Armed with the stats, the students printed off their posters and began pounding the pavement to wage their anti-straw crusade. And while a few folks were oblivious to the sea turtle’s plight, the students were pleasantly surprised to find many more were in the swim.

“We started talking to businesses and found that a lot of restaurants are already moving in that direction,” said Cahill.

One of those restaurants is Steamworks Brewing. Owner Kris Oyler, who also owns El Moro on Main Avenue, said his staff began raising the issue in 2017.

“We started cutting back our straw usage and offering them by request only,” he said. Since then, El Moro has gone a step further, using hay straws (from haystraws.com, duh) in its cocktails.

“El Moro is a little more straw-intensive than Steamworks,” he said. The hay straws so far seem to hold up well in liquid and are in keeping with El Moro’s vintage vibe, he said. “The hay straws are kind of a throw back.”

As for Steamworks, the restaurant has paper straws on order to take for a test-drive. However, as the sea turtle continues to live on in internet infamy, paper straws are in high demand and harder to come by.

Till then, the restaurant will continue to  reduce its usage of plastic straws, supplying them only upon request.

“We’re definitely seeing a drop in demand for straws, particularly among the younger generation,” he said. “We always try to do what we can.”

Of course, many of the environmental mindset have taken matters into their own hands, literally, and BYOS. “My high school daughter has a metal straw she carries around with her,” Oyler said.

In fact, the metal straw is another angle the AHS Interact team is also pursuing. The group sold metal straws for $2 at two recent bake sales, with funds going toward the club’s spring community service project (yet TBD.) They also plan to sell them at the upcoming Noel Night.

“We only have one Earth,” said Cahill. “Yes, not using a plastic straw is kind of an inconvenience at the time, but it’s an investment that keeps our world cleaner, longer.” 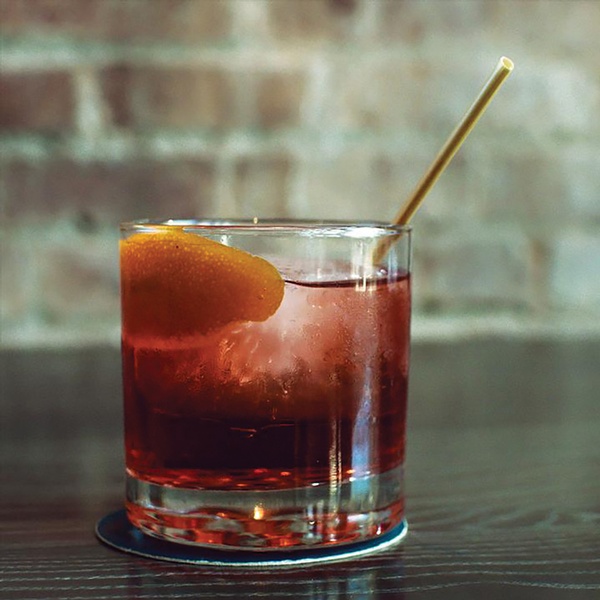 The hay straw, a sustainable throwback now being used at El Moro.