Beyond books
Park, garden, art just some of the things to check out at Pine River Library 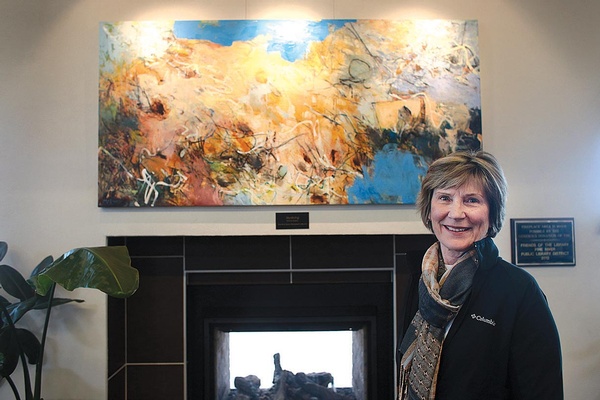 Considering that Bayfield’s Pine River Library has more books than there are people in town, its accomplishments are a remarkable thing. In 2014, the library won the “Best Small Library in America” award, which honors libraries that demonstrate out-standing service to populations of 25,000 or less. In addition to notoriety, the award also came with a $24,880 gift from the Bill and Melinda Gates Foundation, the bulk of which was used to establish a community garden.

The compact library provides a backdrop for learning that often finds as many as 100 students searching the stacks, studying at tables or perusing the internet on any given day. Older town folk are no strangers to the facility either, and the friendly, knowledgeable staff often knows patrons by name.

The latest example of the library’s community outreach philosophy is a soon-to-be-unveiled park adjacent to the building. According to Library Director Shelley Walchak, the idea for the park grew out of a need to offer kids a healthy outlet. “The Library has massive amounts of children after school, between 40 to 100 on a regular day,” she said. “As the staff and I tried to come up with solutions to keep these kids occupied and out of trouble, we realized that they really need an outdoor space to run around and be loud and just be kids.”

The final product includes a playground for K-5 kids, a separate playground for older kids, an environmental classroom with a shade structure, a combined basketball and pickleball court with a four-square

play area, and a large playing field and perimeter walk, she said.

Funding and building the park was a collaborative effort, Walchak said. In 2015, she began talks with Bayfield Town Manager Chris Lamay, who suggested the library go after funding from The Colorado Department of Local Affairs (aka DOLA), which it did successfully. In addition, grants were also obtained from Great Outdoors Colorado and the Colorado Health Foundation. Remaining costs came from the Town of Bayfield, the library’s budget, and the nonprofit Friends of the Library. “It’s been a great partnership with the town,” remarked Walchak.

The park was designed by Ground Works Studios, of Albuquerque; with engineering by Russell Planning and Engineering, of Durango; and construction by Winters Construction, of Farmington.

As for the library’s community garden, that initial concept was conceived in 2009 and the plot was completed in 2013 with funding from the Friends of the Library. It was designed by Katie Feeney and Walker Christensen, of DHM, in Durango. The Garden Club is active and vital to the ongoing success of the garden, with members managing its 24 raised beds.

In addition to vegetables, the library has also been growing visual arts inside, with a number of community exhibits. On Thurs., Nov. 9, the library will host a reception for its latest show, the Fall Community Art Show. The exhibit features the works of 20 artists in a range of sizes, mediums and materials. One piece was even entered by a

middle-school student, but viewers will be hard pressed to identify which one it is. Although the skill of the participants varies from amateur to professional, it is a fun show to see. Unfortunately, the library is not set up as a gallery and the high walls and lighting are not optimal for viewing. Perhaps in the warmer weather an outdoor show in the new park could remedy the situation.

One exhibitor, Anita Rancatti, has considered herself an artist since high school, although not full time, until that is, she recently retired to Bayfield. She has already exhibited regionally, including at the Durango Arts Center, and as far away as Edmonds, Wash. Rancatti said showing at the library has been a unique opportunity. “The library as a venue has lots of traffic which is half the battle for any exhibit,” she said, adding that the library even provided flyers to the artists to hand out.

Another of the artists being showcased among the books is life-long painter Carol Meckling, who was included in the DAC’s recent “Reverie” exhibit, featuring artists-in-residence at Willowtail Springs outside of Mancos. In addition, she is represented in Pagosa Springs at Two Old Crows Gallery and has work on view locally at the Smiley Building and will soon be represented at Studio &. “I enjoy supporting libraries (and) Pine River Library is a beautiful space and important part of the community,” she said.

Another among the 20 artists in the show is Annette LeMaire, who migrated to La Plata County from Pennsylvania two years ago. In 2006, she had the chance to rekindle a passion for art and began to seriously pursue it. “Painting (in the Southwest) challenges me to grow and to expand my palette,” she explained, “And that has definitely brought a new energy to both me and, I hope, my work.”

Given the opportunity to be part of the show, LeMaire said she views it as a way to share the joy that painting inspires in her. “Hopefully, it will infect others with that same energy and inspiration,” she said.

In all, the Bayfield Pine River Library is a model of community outreach and participation, so even if you are just checking out a book, be sure to take some time and check out the exhibit, garden and new park as well. 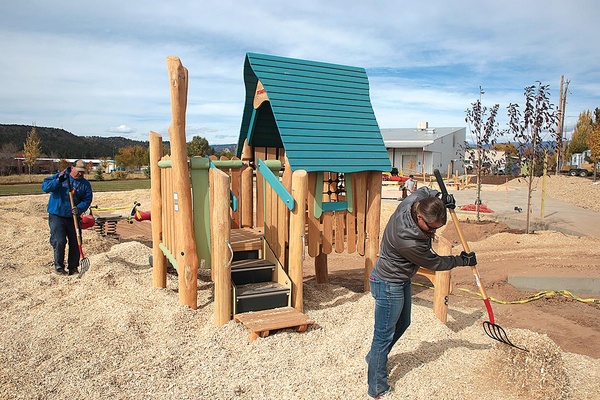