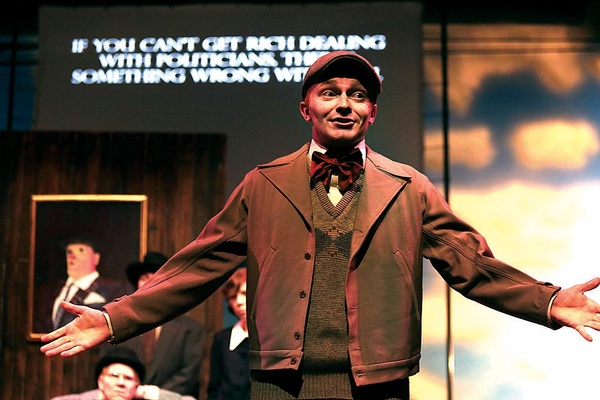 Austin Cohen in his role as Arturo Ui./Photo by Jennaye Derge

German playwright Bertolt Brecht (1898-1956) wrote “The Resistible Rise of Arturo Ui” in 1941 – eight years after he left Germany following the rise of the Nazi party. Using Chicago as a stand-in for Berlin, Brecht wrote the play as a satire to warn people not to repeat the devastating events of the 1930s.

Theresa Carson’s first production as Fort Lewis College Adjunct Instructor is Brecht’s unsettling tale of a gangster and his takeover of the city. Although it was chosen for the theater department by former Chairman Dennis Elkins well before the 2016 election, a terrifying aspect of the play is that it can easily be a metaphor for our current administration. Brecht himself remarked, “The play is not so much an attack on Hitler, but rather upon the complacency of the people who were able to resist him, but didn’t.”

Using parodies as diverse as Al Capone to Richard III with a little of Goethe’s Faust thrown in, Brecht created a somewhat comedic, yet dark and disparaging allegory about relentless fascism.

Carson could not have staged a more timely play. A credit to her craft, she admits that in 20 years as a director, she never staged a Brecht play but always considered it. “There is a style of acting with Brecht that is very different,” she explained. “His goal is to distance or ‘alienate’ the audience, so that they are not caught up in a bath of emotions; getting emotionally attached to the characters or getting lost in the story, as if it is really happening.”

Acknowledging the relevance of “The Resistible Rise of Arturo Ui” to present day America, Carson continued, “(Brecht’s) theatre is a call to action. He believes theatre can be used to motivate an audience to make change.”

To expose FLC theater students to Brecht, and challenge them in the process, was an ambitious task. The play alone entails 23 actors. “I was looking for honest, creative, good people who want to work hard and challenge themselves,” she said. “If you have that, I believe a creative, collaborative and rewarding process follows.” With that many actors, singling out any one, or even a few, for accolades is virtually impossible. Suffice it to say the ensemble is exemplary.

In leading roles, Austin Cohen portrays Arturo Ui, his first FLC lead, and eagerly accepted the challenge, commanding the stage when he is on it, which is almost continuously. Arturo is shadowed throughout the play by henchmen “Giri,” played by Gus Palmer; “Roma,” played by Ben Reece; and “Givola,” by Kody John. The criminal entourage supports Ui through flattery, strong arming and doing his dirty work, which includes murder and arson.

Cohen had never acted in a parody before but was effusive about Carson’s direction. “I have not worked with her in the past and I can’t thank her enough for taking this show on,” he said. “It has been a great experience for everyone involved in the show to try and take on a Brecht piece. She really knows her stuff and takes her time to make sure we understand the unique world of Brecht.”

Kody John, the freshman who plays one of Ui’s sidekicks, said getting off book as soon as possible and memorizing his lines, allowed him to better fit into the role. “He’s a really slimy guy, and I have to embrace the sliminess; it’s very different than who I am,” he said. It is a lesson he hopes to take with him into an acting career.

Alicia Aron, a senior, takes on several roles and, according to Carson, is a “stellar” actor who also directed a Pinter play last semester. She remarked on the play’s timely message. “Right now, it seems to me that our political system is becoming dysfunctional, and because of this, people want something to change,” Aron said. “In climates like this, people like Ui can take advantage of the chaos. It is important for people to realize it is possible to resist.”

Aron acknowledged that one of the most challenging things for her about the show is the four different characters she takes on. “My goal is to have distinct physicality and accents for everyone. Doing this has really tested my versatility as an actor.”

Ui’s sidekick Giri is admirably portrayed by Gus Palmer, an FLC transplant from Santa Fe and the only cast member who has experience with a Brecht play. He was “Readymoney Matt” in “The Three Penny Opera,” which ironically is also a gangster role. “There was a bit of a love-hate relationship between my character and Mack the Knife; much like Ui and Giri,” he quipped.

Commenting on Carson’s direction, Palmer credited her for teaching the students the importance Brecht placed on body movement in telling of his stories. “Theresa Carson reminds me of the great directors I have had who are supportive, kind, disciplined and have an incredible insight for theatre,” he said. “Brecht believed that his shows should be understood by how they move even more so than how it sounds. I really hope that we can achieve that as an ensemble to embody the tradition.”

Director Carson summed up this particular theatrical experience and called out to theater lovers, “This is a rare opportunity in Durango. Some argue (Brecht) is the greatest theatre innovator of modern theatre. If you have never seen Brecht, now is the time.” 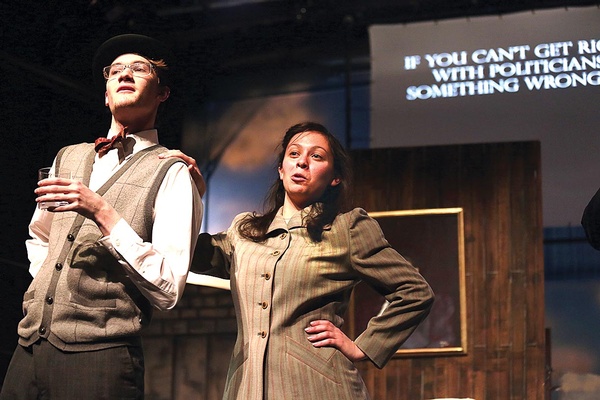 What: “The Resistible Rise of Arturo Ui”