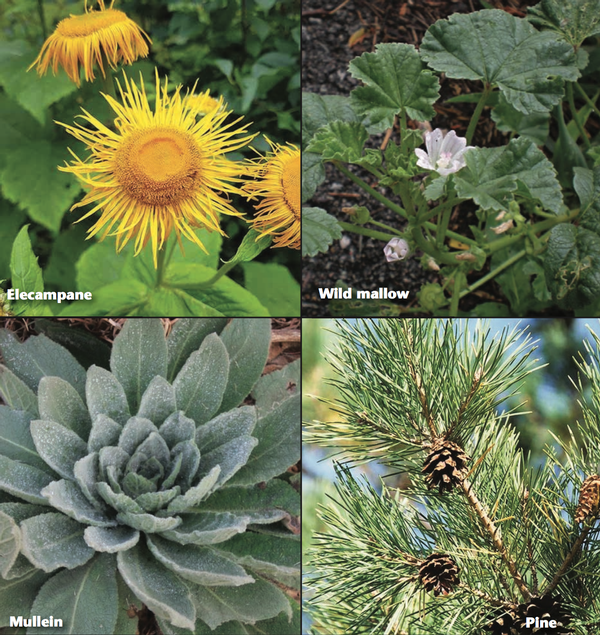 There are lots of good reasons right now for lung support, from a pandemic to seasonal allergies to the beginning of fire season. Here are four easy plants to grow or find for respiratory health. If you have any amount of land, one or more of these may already be there!

1. Elecampane (Inula helenium) – A mouthful of a name, the “ele” part ultimately derives from Helen of Troy; and the “campane” part comes from the plant’s prolific growth in the Campania region of Italy.

Elecampane is a huge perennial that’s a great addition to Colorado gardens. (It’s not native, but grows well here.) The sunny, yellow flowers tower up to 6 feet, and the leaves are huge. The large taproot is what’s most often used medicinally, though the whole plant has medicinal properties.

Elecampane is often thought of as respiratory tract medicine – but its medicine actually extends to multiple body systems. However, healthy breathing is today’s focus.

Elecampane is used for the lungs as a “trophorestorative,” i.e. to nourish and restore healthy function. It’s used in low doses to strengthen the lungs (useful when living at mountain elevations) but may also be helpful in “rebuilding” the lungs after a severe illness, or supporting the lungs in the face of chronic respiratory issues. Elecampane is commonly used for acute issues such as cold and flu, where it helps clear out mucus. It’s immune stimulating and antimicrobial effects also come to play here.

The root is variously used steeped in honey, as a tincture or as a tea. Elecampane is quite drying. To balance this, a dose can be added to a cup of mallow tea when using longer term as a respiratory tonic (More on mallow, momentarily, although if you tend to run hot and dry, you may look to mallow or mullein instead of elecampane to send a little love to your lungs.)

2. Wild Mallow (Malva neglecta) – If you have a yard, you likely have this plant as a “volunteer.” The leaves and roots can be used more or less interchangeably. Mallow tea is soothing and moistening for dry, irritated airways making it a good ally for fire season or for when high winds kick up dust ...I say this as I’m looking at a giant plume of smoke west of town.

Mallow has mild immune-stimulating activity and can be used similarly to echinacea for respiratory infections, but it’s not a stand-alone herb. It’s better combined with other “louder” herbs that are traditionally used for respiratory tract infection such as pine, thyme and elderberry.

Mallow is used as a tea, but preparation is a bit different.

It’s steeped at room temperature for eight hours to overnight. This results in better medicine than pouring boiling water on it.

Food as medicine as food ... Mallow leaves and flowers are a lovely and nutritious addition to salads and also can be enjoyed in smoothies. The leaves are “mucilagenous” (kinda slimy), so they’re best mixed with other greens if your palate isn’t quite ready for the texture. Other mallow family members can be used similarly, including hollyhock, marshmallow and others.

3. Mullein Leaf (Verbascum thapsus) – Another soothing ally for the respiratory tract, particularly for dry, irritated airways and also when smoke and/or dust is in the air. That said, Mullein can also help to gently expectorate excess mucus.

Mullein is used as a tonic for those with chronic lung issues or with a history of smoking. In fact, the leaves can be blended with tobacco in hand-rolled cigarettes by those wanting to slowly wean off tobacco (though not everyone loves the flavor of the smoke.)

Mullein leaf is typically used as a tea for inflamed airways. Either the tea or the tincture will have a relaxing effect on both the airways and the whole person to make breathing easier.

One last note on mullein, despite popular belief, this is not recommended as “toilet paper of the woods.” Unless you like the idea of irritating little plant hairs stuck to your nether bits.

4. Pine (Pinus species) – The term “medicinal herb” may bring to mind lovely little garden plants. And that would be accurate. But, good medicine is also to be found in those tall, woody plants we call trees. Pine is one category of trees that has multiple traditional uses, including a long history as a respiratory herb. Pine is kept on hand for the first sign of a sniffle, tickle in the throat or cough. Useful as a tea, tincture, infused honey or even a lovely-scented steam inhalation, pine is also employed to help clear the sinuses and lungs. It works equally well for hard-to-cough-up sticky “lugers” as clear mucus.

Young needles are rich in vitamin C and calcium and make a nutritious and tasty tea. The distinctively piney aroma of the tea is complemented with citrus notes, as pine and citrus contain some of the same aromatic chemicals.

For reasons unknown to me, pine is not often included in medicinal plant books, though the late, great herbalist Michael Moore talks about it in his Medicinal Plants of the Mountain West (a must-have for plant curious folks in our region). Pine should not be used during pregnancy. There is also the potential that long-term use in high doses may piss off the kidneys (no pun intended), causing irritation. There are no reported cases of toxicity in people using reasonable doses of pine as medicine, though you might encounter some warnings that are derived from toxicity reports on cattle eating pine needles in large quantities.

Know your plants and don’t harvest anything unless you are 100 percent certain of its identification. Understand the contraindications and potential herb-drug interactions before using a plant medicinally. The vast majority of medicinal herbs commonly used in practice have an excellent safety record.

Anna Marija Helt, PhD, is a local herbalist and microbiologist. The information here is not intended to treat or cure any disease, or to supplant the advice of a licensed health-care provider.