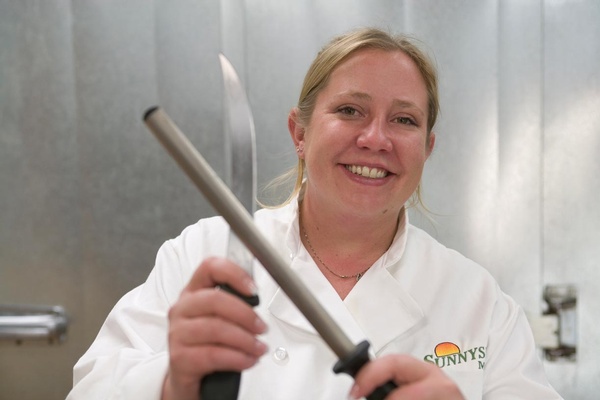 Holly Zink opened Sunnyside Meats and Market in 2002. After spending a decade sharing space at Nature's Oasis, construction is under way for a new home at Purple Cliffs at Escalante./Photo by Scott Griggs

The little piggy going to market to buy roast beef will have to switch up his shopping routine. Sunnyside Farms Market, which has been sharing a building with Nature’s Oasis and Serious Delights Bakery for the last 10 years, is moving down the street to its original location, north of Wal-Mart, on April 2.

This is a temporary locale for the Market until spring of 2019, when it will move into a permanent home at Purple Cliffs at Escalante, a multiuse building complex owned by the Zink family currently under construction.

The up-and-coming Purple Cliffs development (behind Home Depot) will house Zink’s 16-year-old meat, poultry and seafood market, replete with the latest-and-greatest modern touches and wafts of history still fresh in the air. Some folks may recall Durango’s former stockyard and sale barn were within a stone’s throw of Sunnyside’s future location. As well, there’s a bit of nostalgia for anyone who’s ever made out in a parked car at the ole Rocket Drive-In movie theater that used to be here.

“It’s a good business move for us,” says Zink. “It gives us latitude for individuality.”

Besides serving locally sourced, all-natural, humanely raised beef, pork, lamb and poultry since 2002, Sunnyside Farms Market is also a shining example of how a family who works together, stays together. She’s part of a five-generation legacy of La Plata County ranching on both her mother and father’s side.

“Agriculture is in my blood,” says Zink.

While her grandparents were cattlemen and sheep growers, the Zink family is no longer in the livestock business, but the farms and ranches associated with the family are still thriving. Her father, Jerry’s, family’s Waterfall Ranch sits up-valley on County Road 203, while her mother, Karen’s, family’s Sunnyside Farms is nestled south of Durango on County Road 216. Both are Centennial Farms, certificates awarded by the State of Colorado to homesteads that have been in existence for at least 100 years.

Zink grew up on both the ranch and the farm, where days were sweet and full of all the homespun imagery us city-raised folk read about in Little House on the Prairie. Chores, quilts, fireside chats and adorable animals made up the backdrop of Zink’s idyllic childhood. And then came high school graduation.

“When you’re 18, you know everything in the entire universe,” says Zink. “Of course I said, ‘I’m blowing this cow town and never coming back.’”

She made the sometimes-necessary move that many a young Durangoan makes and moved to Boulder to attend the University of Colorado, where the campus population was greater than Durango.

“I’d never been somewhere where people didn’t know who I was,” says Zink. “I got a little lost.”

Zink found solace in a job with the meat and seafood department of an independently owned grocery store. She absolutely loved working with the butchers.

After graduation in 2000, the 23-year-old found herself in an “early life crisis,” not knowing what to do. Later that year, she met her dad in Denver for the National Western Stock Show, a tradition for the father and daughter. There on the bleachers of the bull auc-

tion, she told him she wanted to do something ag-related but not necessarily operate a ranch or farm. She talked fondly of the grocery store experience but expressed she wasn’t sure how to make it fit.

Her dad proposed opening a meat-packing house, something he’d been considering for awhile. The dream started to take shape: Zink would help her dad run the packing house. But first, she had to learn how a packing house worked.

So she entered the Meat Sciences program at Colorado State University. This led her to a small packing house north of Greeley in Pierce, Colo., owned by two brothers. The men had never had employees on the kill floor, which was the area Zink found the most interesting. Zink asked if she could intern – for free – and shadow along with them. Reluctantly, they agreed.

“They didn’t know how to say no ... or maybe I couldn’t take no for an answer,” laughs Zink. “They gave me the grossest jobs, which I didn’t mind. After a week, on a Friday afternoon, they just said, ‘Could you maybe not come back on Monday?’”

Wounded but not defeated, Zink marched herself into another family-owned packing house and offered her services, again, for free. These owners didn’t mind having the free help and allowed her to dabble in all aspects of the job, from packing and labeling to office work and, her favorite, participating on the kill floor.

Once, the uber-competent and confident female, who rarely thinks about being a minority in a male-dominated industry, was asked to leave the kill floor during a week devoted to “ethnic processing.” In this Halal practice, women aren’t supposed to be present at the slaughter. Instead of overturning a belief system that has been around for thousands of years, Zink respected the request and set her scabbard down to work in packing and labeling that week.

After six months, Zink felt “a little wet behind the ears” but with enough chutzpah to head back to Durango and put the learning to work. She moved into the house she grew up in on the family homestead at Sunnyside Farms and joined her dad in the planning and construction of Sunnyside Meats and Market. On June 26, 2002, Sunnyside Farms Market opened its doors. Sixteen years later, Zink manages 29 employees between the storefront and packing house.

Zink focuses on purchasing meat from area ranches whenever possible. Beef, for instance, comes primarily from Dove Creek but sometimes Denver-based Meyer Natural. Lamb is either from La Plata County or elsewhere in Colorado. Pork is purchased from a grower in Olathe, and, for those one-off special occasions, like luau pigs, Sunnyside has three or four growers in La Plata County to call up.

“The purpose of the business is to support growers that already exist,” says Zink. “But I do have to source products that don’t come from La Plata County to round out our product selection.”

After extensive research, Zink chose Mary’s Poultry in California, a third generation, family-owned poultry farm. Seafood is the tough one to source responsibly, but Zink’s seafood guy, Tim, spends hours researching the most sustainable seafood farms and fisheries around the world.

Sustainability extends beyond sourcing to using as much of the animals as possible. Blood compost is turned into natural fertilizer, for example.

“Let me tell you about my commitment to sustainability,” says Zink. “We have a pasture that had quite the concentration of manure, so we decided to redistribute the poo to other agricultural properties that weren’t as fertile and needed a boost. So I shoveled sheep shit all weekend long. Talk about green living.”

Living doesn’t get any greener than learning how to take the life of an animal you plan to eat. For Zink, these memories reach back to her first lamb slaughter when she 6 years old.

“I was in charge of the gut bucket,” she recalls.

Zink says her perception of death was different back then compared to her 20-something-year-old self when she performed her first *kill (*vegans, feel free to skip to next paragraph). The process involves captive bolt stunning, a mechanism that renders the animal “insensible,” a USDA term, says Zink. It loses consciousness instantly and falls down. When it’s clear the animal can’t see, smell or feel, they’re exsanguinated, or bled out, and the heart stops.

“In the beginning, it frightened me that I would hurt an animal and not do the job the right way,” says Zink. “I ended up being successful, and, after that jump off the high dive, I became more confident, which creates a safer environment for the animals.”

If this story behind your back-yard burger or Easter Sunday honey-baked ham makes you squeamish, consider for a moment that somebody has to do the deed. It doesn’t just show up in the wilderness prepackaged with the weight and price stamped on it already.

Recently, a young, philosophical gentleman on a tour of the packing house asked, “How can you claim to love animals and do what you do?”

“These are not mutually exclusive,” re-butted Zink.

A month after the inquisition into her devotion to all creatures great and small, Zink experienced a real-life example she

wished she’d had on hand to share with the skeptic. Her house sits next door to the packing house, and, one cold winter’s night, an alarming squeal crept into her dreams. This wasn’t too uncommon, so Zink did as any caring mommy would do.

“I walked over in my pajamas, turned on the lights and sat on the fence,” she says. “I asked the grumpy pigs, ‘What are we going to do about this? We’ve got to get some sleep.’ So I talked and sang to them until they bedded down. I left the light on and went back to bed. That’s loving animals and running a meat-packing business.” 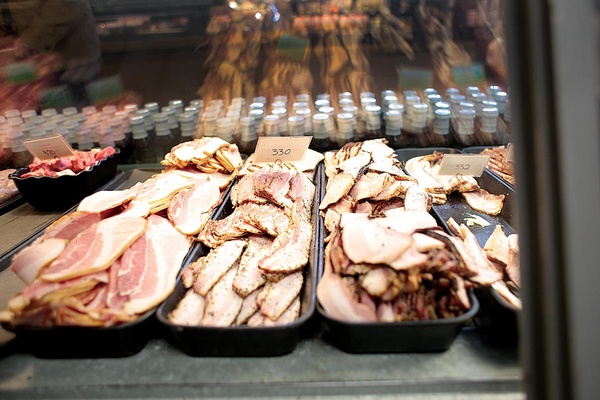 Sunnyside Meats and Market owner Holly Zink spent years in the trenches of packing houses, learning the ups and downs of the business./Photo by Jennaye Derge