Broadening horizons
Sand, metal, rust and the evolution of a painter (with a little channeling of Stanton)

Joe Schafer's landscape "November Canyon" hangs on the wall of Animas Chocolate this week. A house painter by trade, he started focusing his brush on art a year and a half ago, applying his techniques to sheet metal./Photo by Stephen Eginoire

For the last couple of decades, Durangoan Joe Schaefer has held a paintbrush in his hand. So perhaps it’s not surprising that the house painter by trade started dabbling in the fine arts.

What may be surprising – especially to Schafer – is that since he started making large-scale abstract landscapes a year and a half ago, they’ve sold almost as quick as he can finish them.

Instead, it was his wife, Becca, the bonafide artist in the family with an art degree from Fort Lewis College, who saw the potential.

As Joe tells it, he was working on some metal countertops for a client when he started experimenting with various paints, acids, stains, dyes and sanding techniques. “I’d get these kind of cool effects,” he recalled. “I had a few of these pieces sitting out, and Becca said, ‘You should think about doing paintings.’”

As those who’ve met Joe or who have ever attempted to keep up with him on the skintrack or singletrack know, he is not one to dilly dally. With the family – he has two teen-agers, son, Leit, and daughter, Sadie – away for a week, he hunkered down in his Mayday workshop like a mad artist. “Next thing I knew, I had a piece I really liked, and I sent Becca a photo and she was like, ‘Don’t touch it!’” he said.

“I said, let’s see if we can start making paintings.”

And make he has – since tapping into his artistic side, Joe has produced about 50 works, including a few that were commissioned. His art now adorns the walls of the Animas Chocolate & Coffee Co. downtown as well as 81301 Coffee uptown. This Fri., Jan. 24, he will be hosting a reception for his second show of work, from 5 – 7 p.m. at Animas Chocolate, 920 Main Ave.

Although he has sold pieces to clients from as far away as Albuquerque and Seattle, Joe said the majority of his pieces have gone to locals. He jokes the he “sells paintings in parking lots” since that’s where many of the transactions take place. Just last week, he got a call from a woman from Maine who saw his piece, “November Canyon” at 81301 Coffee. She ended up buying it for her daughter, a smoke-jumper who lives in Durango.

“It’s usually locals or people who are identifying with what we have here,” he said. “They see something in the place that they like... some connection to land or sky.”

This is not by accident. Schafer’s preferred subject matter is the Colorado Plateau, somewhere he has called home since moving to Durango from Denver in 1983 to attend FLC.

“It’s a wonderful place, geographically, I love the area,” he said. “I love the mix of terrain between the San Juans and La Platas fading into canyon country.”

Perhaps this is also why Schafer’s paintings – stark, textured vistas evoking big sky and land (not a cow or horse in sight) – are vaguely reminiscent of another Southwestern landscape painter from Durango. You know, that guy  named Stanton Englehart.

And while Schafer didn’t set out intentionally in the master’s footsteps, like the happy accident of his first experiments in his shop, it sort of grew organically.

“I got done with my first painting and said, ‘It kind of looks like a Stanton. Is that good or is that bad?’” he recalled.

For Joe and Becca – both big fans of Stanton and former students of his at the Fort – it was good. And probably not 100 percent coincidental, given how ubiquitous Engelhart’s work is throughout the area. Call it artistic osmosis, if you will.

“I’ve always loved his work,” said Schafer of the painter who died in 2009. “You see his work wherever you go. There are similar things between his and mine.”

But unlike Engelhart, Schafer uses a variety of products and techniques, gleaned from his years as a house painter. And he often experiments with media that don’t always play well together – say oil and water – for interesting and surprising results.

“You get all kinds of cool things that happen,” he said. “I want it to separate and do things, things that are a little out of my control.”

Then there’s the issue of rust – all of Schafer’s paintings are done on sheet metal. He’ll often apply a treatment only to return and find rust, in the familiar shades of orange and red, but sometimes in rarer hues of blue and green.

“That happens a lot, and then I go over the top with texture,” he explained of how he incorporates the natural oxidation into the work.

And speaking of texture - his favorite medium for that? Run-of-the-mill desert sand. In fact – “not to sound too goofy” – Schafer’s been known to scoop up Colorado River sand in doughnut hole containers on river trips or scrape desert clay off his daughter’s car after a trip to Cedar Mesa.

“Sadie brought home all this orange to reddish mud stuck to her car,” he practically gushed. “It was wonderful.”

As such, it’s almost like Schafer’s paintings come to life – one can practically reach out and feel the desert grit, the sheer sanddtone face and the wispy cirrus clouds. A tangible piece of the Southwest in one’s own living room.

But not all of his works make it that far. Because as with life and art, getting there is half the fun. Or not.

“All of my paintings have had many incarnations,” he said. “I’ll get really close, and really like something, and I’ll f*** it up.”

Sometimes a well-intentioned experiment goes awry; other times, pieces fall off the wall and crumble on the floor before his eyes. “I’ve learned to try not to get too attached,” he said. “I don’t want it to get like house painting where I get stressed.”

Speaking of which, Schafer’s art has taken off so much, that he has cut back his day job to three days a week. At 55, he said the change of pace is welcome. It also allows him to work on several paintings at once, but unfortunately, it has eaten into some of his other favorite Durango activities. But that’s OK, too.

“I don’t even own a road bike or mountain bike right now,” he said. “Art has taken all of my time and energy.”

He said now the trick is finding balance

– between the house painting, art, wife, family and being able to sneak away for a ski, run or ride. After all, that is where he finds his best inspiration, which someday you may be lucky enough to gaze upon while you sip your coffee and dream up adventures of your own.

“I’ve spent a lot of time outside,” he said. “When you are in a place for a certain amount of time, and you are watching the sun fade and the shadows are popping up or ridges are fading, or the way the snow will lie – part of that is from a life of being outside and appreciating it.”

He hopes that appreciation is something he can share with others, too.

“People see a painting, and next thing you know, they’re relating to something in the painting. That connection has been really fun.”

To see more of Joe Schafer’s work, check out www.joeschaferstudio.com or check him out on the Insta 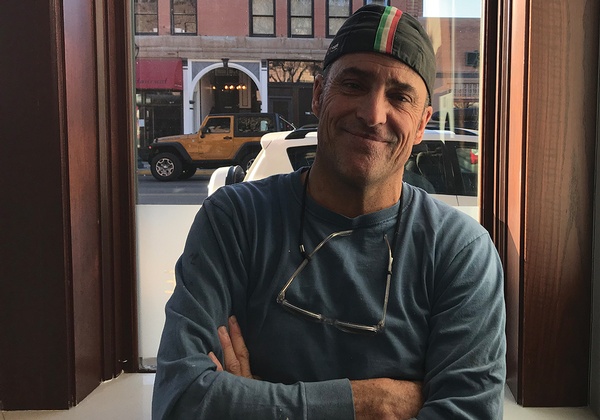 Joe Schafer inside the Animas Chocolate Co. where he'll be hosting an opening for eight more of his paintings on Fri., Jan. 24./Photo by Missy Votel