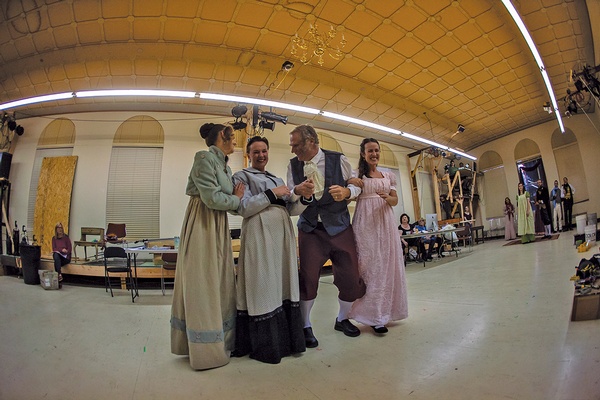 Among the best-loved 19th century romantic novels, six are most assuredly penned by English novelist Jane Austen. The first of these six – and arguably the best known – is Sense & Sensibility, published in 1811. Although it was her debut novel, it exhibits all the complexity, humor, charm, social comment and beautifully crafted prose of her later books.

The work of fiction has been portrayed in film and on stage as faithful to the original style as befits a classic. Then in 2014, Kate Hamill, an actor and playwright, wrote a new version that premiered off-Broadway to rave reviews. It was referred to by the “Huffington Post” as “the greatest stage adaptation of this novel in history.”

Austen’s themes of the social lives of English landed gentry, particularly the expectations of, and about women, and the importance of securing a “good” marriage, may seem anachronistic. Hamill’s updated version however, addresses the subject in a different manner.

And thanks to the vision of Mona Wood Patterson and the equally gifted Charles Ford, Durango’s own Merely Players is bringing Hamill’s “Sense & Sensibility” to local audiences.

Describing her reason for choosing Hamill’s version of the story, Wood Patterson said while Austen’s words are descriptive and powerful in the book, they don’t necessarily “flow nicely” out of the mouth. Nor can they be summed up neatly for the stage. “(Hamill) has updated the language and consolidated the 400-page novel into two hours,” she noted.

Wood Patterson also noted this will be the regional premiere of the show. “So that’s quite an honor,” she said. As staged, the story of the Dashwood family never infringes on the original novel’s sense of values, society or human frailties. Hamill said the characters of Elinor

and Marianne Dashwood reflect the reaction to social pressures and asks audiences to consider the question: “Do we follow the rules, or do we break the rules and follow the dictates of our own conscience?” Hamill goes on to note there are real consequences in the conflicting rules vs. one’s conscience, specifically for women and disadvantaged people in that rigid and reserved type of society.

The Dashwood sisters, for the most part, are the driving force in the story and are portrayed in the Merely Players’ production by Mary-Catherine McAlvany, as Elinor, and Gyana Gomar, as Marianne. For those not familiar with Austen’s masterwork, the story unfolds after the death of their father, Henry Dashwood, who leaves his substantial estate and wealth to the oldest son of his first marriage, John Dashwood (played by Miles Batchelder).

That leaves his second wife, Margaret Dashwood (Anna Klumpenhower), and her daughters without a home and little income. Though step-brother John has pledged to provide for his stepmother and step-sisters, he veers away from that promise. Mrs. Dashwood, played by Mandy Gardner, therefore accepts an offer from a distant cousin, Sir John Middleton, played here by Marc Arbeeny, and moves to a small house in Devonshire with her daughters. Nineteen-year-old Elinor is unhappy about leaving their home because she has met and fallen in love with Edward Ferrars (Jeff Graves), the brother-in-law of her half-brother, John. And that’s just the beginning of the story.

As is often the case with Merely Players, the ensemble cast takes on more roles than seem plausible. Batchelder, for example, has eight roles, while Graves takes on five. Geoff Johnson has six roles, and Jason Lythgoe has four. Both, incidentally, portray a dog, as does Batchelder and Moriah James. Other “animals” appear throughout – horses, a rabbit, chickens and a duck add levity and are sure to give the audience a chuckle or two. There are even some male actors portraying females, which is all part of the fun. The cast of 14 is rounded out by Mady Brand, Judy Hook, Dolores Mazurkewicz and Heather Rasmussen.

The Dashwood sisters being the focal point of the play, Gomar and McAlvany enthusiastically talked  of their experience bringing them to life on stage.

A Durango resident since she was 12, Gomar moved here from Mexico and attended Durango High School where she was active in Troop 1096 and later worked with Merely Players in “Dead Man’s Cell Phone” and “Man of La Mancha.” Admitting she only first read the Austen novel after earning the role of the younger sister she said, she found the plot to be quite endearing. The book also offered her hidden clues for how to approach the role. “As often happens with books, there are so many hints of the character’s motivation, emotion and personality hidden within the text that you might miss when watching the film; it’s been extremely fun to find those subtleties,” she said.

In the story, the younger Dashwood is the sensitive, more emotional sister who feels everything deeply, which Gomar strived to portray. “In this role, the most challenging piece for me has been creating a genuine portrayal of (Marianne’s) varying sentiments while remaining true to her underlying essence,” she remarked.

Ironically, Gomar has worked with almost everyone in the cast except McAlvany, who plays her older sister, Elinor. “We got lucky, because even though we didn’t know each other, in the first rehearsal we just instantly clicked,” she said. “Our sisterly bond came organically, and it’s been a pleasure to work with her.”

McAlvany, a Durango resident since 2002, has been a Merely Players performer for several years. In contrast to Gomar, she has been a fan of Austen’s novels since childhood and Sense & Sensibility was her all-time favorite. In fact, she admitted that Elinor is her favorite Austen heroine, and auditioning for the role was like coming home. “It just felt right,” she said.

Despite her familiarity with the character, she said it was still a challenge to find Elinor’s balance between playfulness and restraint. “She’s the elder sister trying to do her duty in a Regency era England full of class and societal expectations,” she said. The actress added that the consequences for women stepping “out of bounds” and not meeting expectations have a great deal to do with the character and the play’s central theme.

Merely Players frequently uses unique venues in which to stage their remarkable productions, and “Sense & Sensibility” is no different. It will be performed in the old Fort Lewis Library building in Hesperus.

Wood Patterson gushed about the venue. “It’s a gorgeous, open space with beautiful windows and imbued with history,” she said. “And we are using ‘alley staging’ with audiences on two sides.”

Audience members who attended Merely Players’ “Baskerville: A Sherlock Holmes Mystery” in a barn off Farmington Hill will recall how delightful such found space can be.

Theater lovers familiar with the use of a chorus in Greek tragedy to narrate key elements of the play will recognize Hamill’s incorporation of “gossips.” In this play, they represent the immense societal pressure that Edwardian people faced and help advance the story. Wood Patterson acknowledged that gossips commenting on everyone and everything is still sadly relevant to today, exacerbated even more so by social media.

There are 45 scene shifts and two acts in the play, but almost no set design. Period-style costumes were done by JoAnn Nevils with choreography by Jessica Jane Harris. Referring to her approach to the space, the number of scene changes and the cast, Director Wood Patterson said she calls her approach “active storytelling.”

“It was a fun challenge to put this all together,” she said. 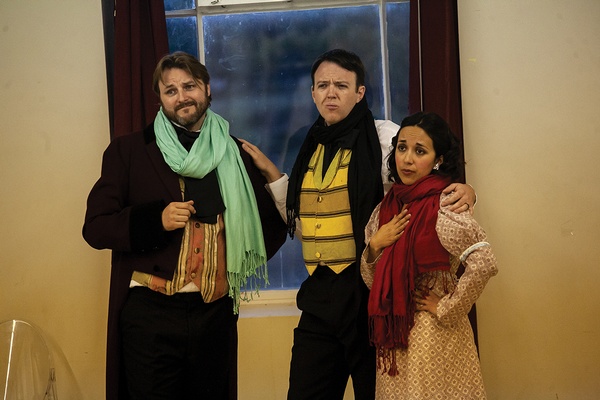