Chickens of the sea
When it comes to cooking these large ocean insects, don't bug out 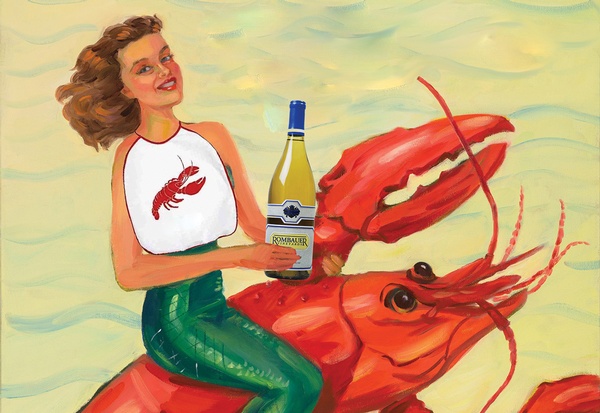 Can a lobster be misunderstood? The answer, on so many levels, is a resounding yes. Take for instance one night in my kitchen a couple weekends ago. Three women gripping delicate wine glasses watch in horror as six scrambling lobsters are dropped into a giant, boiling vat of court-bouillon. The lobsters scream in agony (it seems). Which provokes a lot of screams from us.

Is it justified? All this kitchen screaming?

The first of three husbands steps forward in defense of his seafood dinner. He’s a brainy sportsman hosting one of the many patchy, half-grown, gray-brown beards that seem to be defining a generation.

“Lobsters are bugs, like grasshoppers,” he snaps. “They have no throat, no vocal cords, no lungs, no feelings. They’re gill breathers. So they can’t talk back!”

Even my own soft-hearted husband’s culinary tact is off: “They have teeth in their stomach, dude! Kidneys in their head. Taste with their feet and smell with their walker legs. They don’t have a brain. And no brain means no pain, right, babe?”

It’s my party, and I can scream if I want to. But I don’t have to. One of the seemingly dead lobsters suddenly speaks for me as it flops hot water out of the tall pot. Everyone close by gets splashed. We laugh but not much.

“My buddy Duncan kept a left-handed lobster in a tank. Seriously – in Key West. With a pincer claw that could snap a man’s finger off in one twist, just like this.” The husband demonstrates with an odd gyration of the wrist toward his drunken wife.

Mercury’s still in retrograde. And it’s the Worm Moon. I tell myself: just turn back around to your newly passed crustaceans, in their shiny shells, who have settled deep into the pot and taken on a crimson beauty. And any leftover grief or disgust any of us (monkeys) had has been stiffed by a long swallow of a buttery, cold chardonnay.

It’s been said that the only way you can screw up preparing lobster is by overcooking it. Not true. The placing and forgetting of whole live lobsters in the freezer overnight, where they dissolve, to our astonishment, is a mistake. As is refreshing the poor darlings after a long flight in a cold bath (fresh water kills them). This kind of dead lobster isn’t much fun to look at, smell or contemplate cooking.

My advice is, when it comes to live lobster, relax, dear reader. Throw a wet towel over them and let them chill out in the fridge. Don’t try to interpret their scratching. They like it in there. They can breathe. Don’t even contemplate quieting them. Tazering, hypnotizing or blowing marijuana smoke up its ass (assuming “it” has one), is way too stressful on both you and your soon-to-be supper.

But some people just can’t stand the thought that lobsters might “feel” the boiling water, so they want to kill them before, well, they kill them. One way to dispatch a lobster quickly is to (carefully) remove their eyestalks with small, sharp pliers. Another professional’s favorite is the slice-the-head-off-the-thorax-with-a-ginormous-knife method. Very messy. Either way it’s a kitchen kill no one likes to consider.

(Just) last year, Switzerland banned the “practice” of boiling lobsters alive. Their logic is that if on the off-chance lobsters do feel pain, boiling them to death seems especially cruel.

But really, it’s the only way. Don’t be a pussy. Plunge the lobsters live, head first, into a 20-quart stock pot half-filled with boiling water. (No wincing.) Once the liquid’s rolling again, boil them for a good 20-30 minutes – or until an instant thermometer through the soft side of the tail reads 145 - 165.

When the lobsters are bright red with a bit of very white mucus (which is the cooked, formerly clear-colored blood of a lobster), they’re perfectly done. Feeling better? Take a knife and punch a hole in the body and tail and drain their precious juices into the remaining stock (saving every drop).

Fancy chefs parboil their lobster so the soft meat easily pulls away and out (whole) from the shell. Separately or not, each are fully cooked later into one of a hundred wonderful sauces.

Like most Americans, though, I’m a yank-the-meat-out-of-the-knuckle type of lobster eater. Clarified butter all over me. I understand the anatomy of my lobster so well that my husband refers to me as the Edward Scissorhands of dissection. I know it sounds disgusting, but I’m a true connoisseur of the soft green substance known as tomalley, i.e. the liver and pancreas. It’s lobster concentrate prized for its creamy texture. Give it all to me.

I’m a fool for lobster. Any lobster. Like the rare blue lobster from Scotland. Or the infamous Fourcha lobster from the tiny, icy banks of Nova Scotia. It’s described as “full, complicated and mineralized.” Some say it’s the best lobster in the world (probably because it’s only available for a few weeks each spring).

But how did a girl born and raised in New Mexico ever get a hankering for fresh lobster? I glance at my cat, Tomas. He loves fish; salmon Florentine is his favorite, and yet he was born and bred in the desert, same as me. It’s mysterious. Maybe a great, great uncle sailed the seven seas with one of his furry kin. Neither one of us is fully domesticated, so I don’t really know.

I do cherish the fact that one of the world’s most precious, sought-after foods didn’t begin as such. Like most good Americans, the Maine lobster started out pretty darn trashy. So plentiful, the pilgrims had to kick through them piled 2 feet high on the sea shore.

Their bounty made them a precious source of sustenance during hard times, which soon gained them a nasty reputation as being the poor man’s protein. Fed to the indentured servants, to felons sitting on death row, slaves. Lobster was for the starving class; with no butter, salt or mayo (as the French like it.) So you can understand why colonists eschewed it. Cold, wet flesh of shell fish day in and day out. Revolt! And they did.

It wasn’t until luxury rail travel started serving lobster in dining cars traveling through land-locked areas that it was rebranded as “gourmet.” By the 1920s, over-fishing reduced supply, and lobster finally became fit for the Great Gatsby crowd. It wasn’t until the ’50s and ’60s that lobster came into fashion as an A-lister, late-night, super-sexy indulgence.

Which is an irony, if you consider the lonely existence of the poor, cold-water lobster. Around for 100 million years, they’re shy bottom feeders that are biologically immortal (they continue to grow throughout their entire life but never show signs of aging). They die mostly of external causes (us). Until the age of 4, the tiny lobster spends his time hiding under seaweed and small rocks, catching bits of food that drift down to it. Only at night does it venture out. They must molt their shell (and grow) about 25 times before they’re tough enough to survive cod, haddock, seals and humans of the sea world.

At the table, the talk is quiet as we each maneuver through claw and tail. I wanted to throw a small but “fancy” dinner that didn’t cost a fortune. I did good on the product because it was fresh and cheap: six 11⁄2-pound lobsters shipped overnight: $200. And they tasted ... SWEET. A simple word repeated again and again and again.

The internet has a few good places to find frozen warm-water lobster tails from lots of different continents. If you cook these beauties correctly (poached in salted butter) they will be so unctuous your teeth nearly clinch. But for me, it’s not really lobster unless it comes with tackle: big old claws. Because boiled lobster dipped in butter (with a tiny shake of nutmeg) is just the first course. I gather all the dead lobster parts from everyone’s discard plates – shells, carcass, tentacles, swimmer legs, air sac – and pack them tightly into the deep freeze, awaiting the day they become the backbone of the second best thing in the world: lobster bisque.

But that, dear reader, is a fish dinner we’ll serve forth another day. 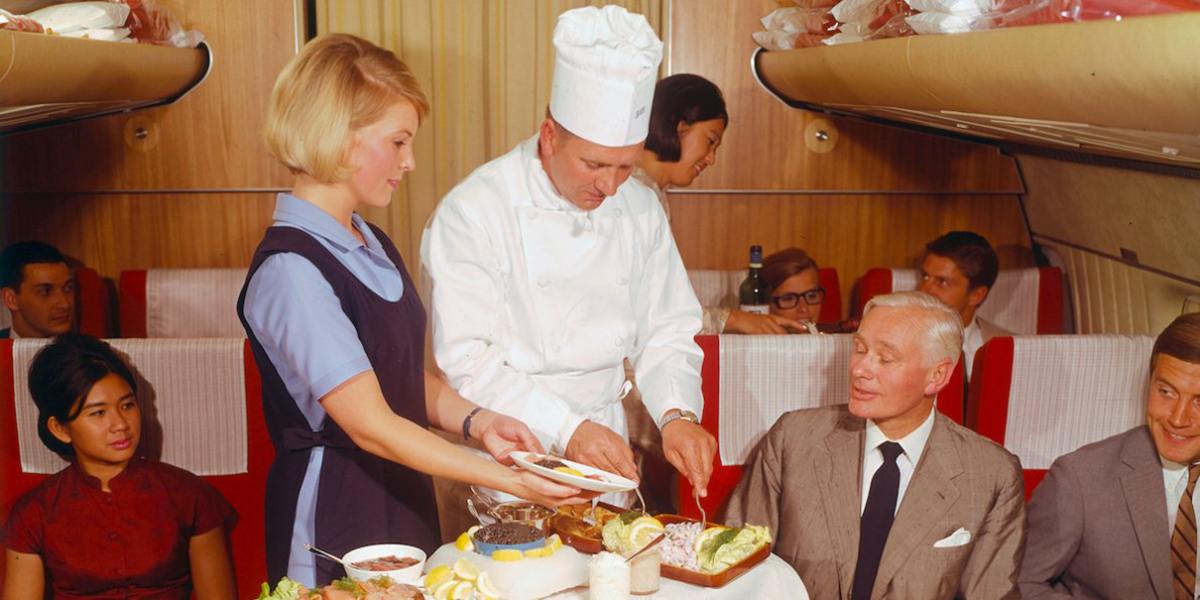 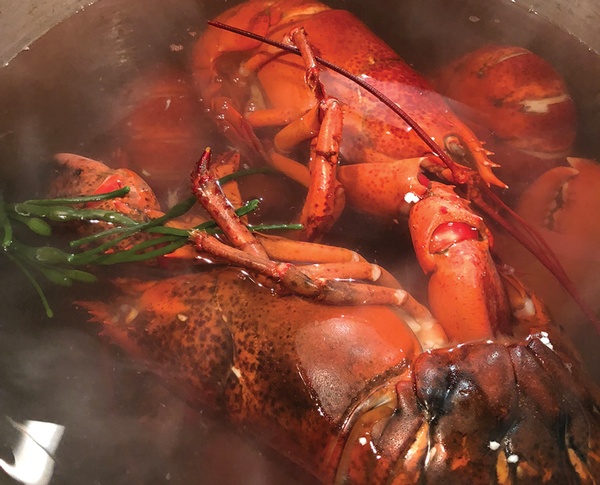