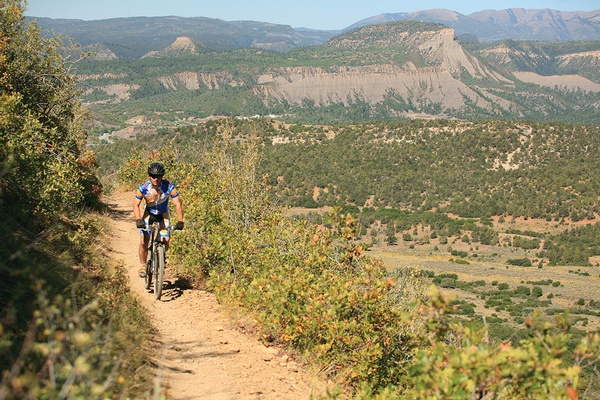 Will e-bikes be coming to a singletrack near you soon? Local residents looking to learn more about this possibility or to weigh in, are invited to a public meeting next Wed., Nov. 20, at the Rec Center./ File photo

It’s time for Durango to have the talk. After years of watching, waiting and wondering, the topic of electric mountain bikes can no longer be avoided. The City of Durango will tackle the issue head on Wed., Nov. 20, at the Durango Rec Center when it hosts a meeting and public comment session on whether to allow e-bikes on natural-surface trails. The joint study session among the City’s Natural Lands Preservation, Parks and Rec, and Multimodal advisory board, starts at 5 p.m., followed by public comment at 6.

The event is merely for information gathering, Durango Parks and Rec Director Cathy Metz said. It may or may not result in a recommendation to City Council, which may or may not want to hold hearings of its own on the subject.

“The point is to bring everyone up to speed,” she said. “We really want to hear people’s thoughts.”

E-bikes are currently banned on city natural-surface trails although they have been allowed on hard-surface trails since 2018 after a yearlong trial run. Since then, the city has been watching to see how other places are dealing with e-bikes on trails. The first municipality in Colorado to take the plunge into e-bikedom was Jefferson County, west of Denver, which started allowing Class I (pedal-assist) e-bikes on its 244 miles of trails in 2019 after a year-long pilot study.

Following suit was Colorado’s state parks system, which also began allowing Class 1 and 2 (throttle-controlled) e-bikes on trails open to mountain bikes this year. Both e-bikes have top speeds of 20 mph, as compared to Class 3, which is governed at 28 mph.

However, the City of Durango’s hand has mostly been forced by the Department of Interior decree in August that e-bikes be treated the same as bicycles on BLM and national park lands. (The Forest Service falls under the jurisdiction of the USDA and as of now, still manages e-bikes as motorized vehicles.) Several trails in Durango are on BLM land, including Sale Barn, Grandview Ridge, Animas City Mountain, Smokejumper and Skyline. However, accessing these trails often entails crossing city land, where e-bikes are banned.

“Should that change?” Metz asked.

Of course, given how sacred mountain biking is in Durango, there are strong opinions on that question.

“People are polarized,” local mountain bike champ Travis Brown (who in full disclosure works for Trek bicycle company) noted. On one hand, you have the mountain bike purists and lovers of peaceful recreation who think e-bikes will bring more disturbance and want to see them governed as motorized vehicles. On the other side, you have the all-access crowd, who thinks all trails open to regular bikes should be open to e-bikes as well.

Brown, who has a vested interest from a personal and professional standpoint, has attended many of the city’s meetings on the topic, to hear arguments and share what he knows from working in the industry.

“I want to keep people accountable on both ends,” he said. While he admits the DOI edict was not responsible, he would like to see the conversation based on science, technology and case studies rather than unfounded fears and beliefs. For example, despite popular opinion, e-bikes do not make noise, are not capable of speeds over 28 mph and studies show most e-bike owners are people who already have active lifestyles.

One concern raised by environmentalists is that e-bikes are a slippery slope. With the DOI decision being made with no public input, who’s to say dirt bikes and other motorized vehicles won’t soon follow suit, they argue.

“No one in the conservation community has anything against e-bikes,” Michael Carroll, director of the Durango-based wilderness Society told the Telegraph in September.

“We just want an open process, and we want e-bikes in the right places.”

To that end, local trails advocacy group Trails 2000 is proposing a year-long e-bike trial in the Twin Buttes trail system. Trails 2000 Executive Director Mary Monroe-Brown (in full disclosure wife of Travis – it’s a small town) thinks Twin Buttes is a reasonable choice because it is self-contained, making for easier analysis and, for the most part, trails are ridden in the same direction, reducing the chance for conflicts.

Although Trails 2000 does not have an official stance on e-mtbs, Monroe-Brown said studies show they don’t lead to more wear and tear on trails. “It is our point of view that e-bikes don’t create more work as far as maintenance, erosion, etc.,” she said.

One mountain bike advocacy group that has weighed in is the Boulder-based International Mountain Bicycling Association, which supports Class 1 e-mtbs – with a caveat. “We’ve been supportive of Class 1 e-mountain bikes on mountain bike trails as long as our access isn’t impeded or threatened,” IMBA’s executive director David Wiens told Outside Online in September. “It’s very important that traditional mountain bikes remain independent, that they don’t become one and the same.”

However, as e-bikes grow in popularity, that may be inevitable. According to the NPG Group, a New York-based marketing research firm, e-bikes comprise a small (6 percent) but rapidly growing share of overall bike sales in the United States. In 2017, e-bike sales totaled $77.1 million, a 91 percent increase over the previous year and an eightfold uptick since 2014. According to Brown, e-bike sales make up 30 percent of bike sales in Germny and other parts of Europe and 50 percent in Japan.

Combine that with a Trails 2000 study that found there are five times more people hitting local trails in the summer (11 times more in the winter) than 10 years ago, and it may seem we are on a collision course unless we get proactive.

Metz said with the introduction of e-bikes on hard-surface trails, the City undertook an awareness campaign, painting stripes down the center line of the Animas River Trail, increasing signage, placing trail etiquette brochures at the Visitor’s Center and posting a video on the City’s website. However, she notes, educating people and enforcing rules in the far corners of, say, Horse Gulch, could prove a bit more challenging. Currently, the City has two rangers who regularly patrol open space, although much of their time is spent tending to social trails and illegal camp sites.

In addition, Metz points out that trail etiquette is just that – a set of guidelines with no real teeth. Rangers can merely “educate” folks when they see them doing something wrong but can’t issue citations.

“Right now, there are no rules in ordinance around who yields to who,” she said. But this could change. “What we may hear from folks is, it’s a great start, but it’s not enough. We need more enforcement,” she said.

If Jeffco is a bellwether, enforcement may be a non-issue. Mary Ann Bonnell, a ranger for Jefferson County Open Space, told Outside that today, the county fields far more complaints about dogs off leash than e-bikes. “The idea that they cause more accidents – we are not seeing that with e-bikes in our medical response calls,” Bonnell said. Problems, when they do occur, are about failure to observe trail etiquette, she said.

In other words, maybe all trails lead to common courtesy. Perhaps the best approach is to take a deep breath, smile and not be an (expletive) – because we’re all out there for the same reason.

“We all want to get outside and get our workout in,” Monroe-Brown said. “And trails are the gateway, no matter what you’re doing.”