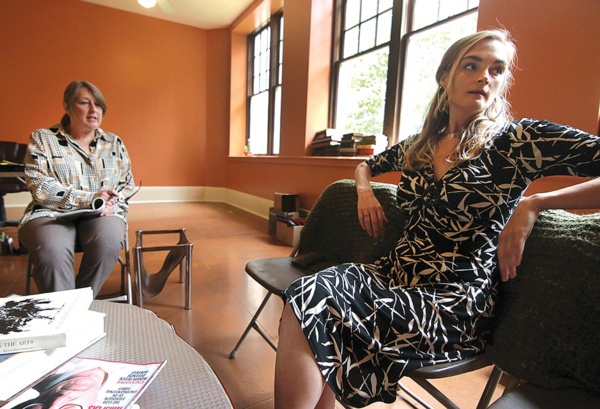 Maureen May, left, and Karina Wolfe rehearse a scene from "Collected Stories" at the Smiley Building last week. The show, directed by Mona Wood-Patterson, opens at the Durango Library on Friday night for a six-show run/ Photo by Jennaye Derge

One of the fascinating characteristics of Merely Players Theater Co. is its use of unorthodox performance space. Be it an empty hotel pool or vacant art studio, the troupe’s latest production is no exception. The Durango Public Library is the newest “found space” in which they have chosen to perform. This time it is David Margulies’ play “Collected Stories,” a 1997 Pulitzer Prize finalist. Although a library might seem a demanding venue, it is actually quite fitting. The two-person play is set in a writer’s small Greenwich Village apartment spanning a period of six years. According to the playwright, it “dramatizes the effects of time and circumstances on partnerships built on shared passions” – which, in this case, is the written word. Consequently, a library venue seems more than appropriate.

“We want to capture the intimacy (of the small apartment),” Director and Merely Players Co-Founder Mona Wood-Patterson explained. “We are staging the play in the round and can only seat 54 people per performance and expect it to be a unique theatrical experience for our community.”

With only two performers on the set, the casting had to be carefully considered, and Wood-Patterson acknowledged waiting a long time before her preferred thespians were available at the same time. Two of Durango’s best actors, Maureen May and Karina Wolfe, will portray Ruth and Lisa, respectively. May, as many are aware, is a highly acclaimed, multi-talented artist as well as a superb stage actress. Appearing in regional theater since 1986, she was seen in 2014’s “Other Desert Cities.” Wolfe, who lives in Los Angeles, was a former student of Wood-Patterson at Durango High School and is presently a resident artist with The Vagrancy L.A. Theatre Co.

“Collected Stories” explores the emotional as well as legal question of an author’s right to use biographical material from another person’s life; particularly when the other person is also a writer. As the two-act, six-scene play unfolds, we learn that Ruth Steiner (May), an older, highly regarded author never wrote about her youthful affair with 20th century New York poet Delmore Schwartz. Lisa Morrison is a former student of Steiner’s and published an acclaimed collection of short-stories under her mentor’s direction and later followed it with a novel drawing upon Steiner’s affair with Schwartz.

Margulies, the play’s author, has said “Collected Stories” was inspired by David Leavitt’s 1993 novel While England Sleeps and the ensuing debate that followed its publication. The book is said to have been patterned after the autobiographical writings of English poet Stephen Spender, who subsequently sued Leavitt leading to the novel being revised.

During the six-year span in which “Collected Stories” occurs, Lisa gains Ruth’s complete confidence and cajoles her into divulging what had always been forbidden territory: the story of her sad love affair with the self-destructive poet, who died in 1966 at the age of 53.

May and Wolfe were both cast by Wood-Patterson without audition, which in itself speaks highly of the match up. For Wolfe, her return to Durango is long overdue. “Of course working with Mona and Charles is the main reason I wanted to return,” she explained. “But, I have several other reasons. Coming back to Durango is a big one. I cherish the place beyond words and consider it a huge part of who I am, so to come back to perform is incredibly thrilling.”

In a nod to community spirit, Wolfe’s journey to Durango was sponsored through the generosity of Richard and Mary Lynn Ballantine.

Wood-Patterson had told Wolfe about the play, but the young actress didn’t read it until she was officially offered the role. “I had already pretty much accepted the part because I have complete trust in Mona’s taste, but was thrilled to find how intelligent and beautiful the play is.”

May first worked with Wood-Patterson almost 30 years ago, and this will be their fifth collaboration. “Mona seems to have a tendency to cast me in roles of very strong, yet very conflicted women,” she remarked.

Describing how a role such as Ruth, who is a writer, differs from her previous portrayals, May explained, “Being a visual artist and teacher myself, I find a lot of common language in the script, which I can readily relate to.”

Having prior experience working in the “found space” productions of Merely Players, May loves the challenge. “The library will be no less challenging. There’s something about the intimacy of being in the library setting, the subtle smell of the books, and being in a familiar, common shared space,” she said. “I’ve never performed in the round, which has its own challenges, but I do like the community aspect of it, having the audience right up close and personal.”

Both May and Wolfe find themselves in the company of some very fine actors; since its debut in 1996, the play has featured such star performers as Sarah Paulson, Linda Lavin, Helen Mirren and Uta Hagen.

Attendees will experience the two-act play in six chronological scenes covering the six-year timeframe with a 15-minute intermission in between acts. Because it will be a library venue, there will be no set, no costumes and no theatrical changes to mark the time, which creates an additional challenge for the actors.

Wolfe’s enthusiasm leading up to the performance encapsulates the story’s theme as well as her perspective on the role. “I just love how honest and smart the play is. It’s a very simple structure; two women writers talking in one apartment throughout several years, continually rediscovering their own complex relationship to each other.”

In what she refers to as a “prequel,” Wood-Patterson incorporated a unique element to the play. As the audience arrives, provided it is before 6:25 p.m., they will have the opportunity to either follow Lisa (Wolfe) in the library stacks or stay in the “apartment” with Ruth (May), where the actors will already be in character leading up to the opening.

In view of the fact there is a limited number of seats and just seven scheduled shows, theater-goers will need to act fast to secure a place in the “apartment.”