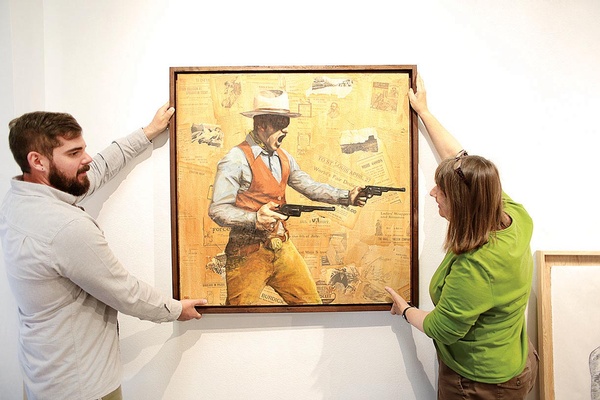 Change is the hallmark of any enduring institution, and for well over 40 years, the Durango Arts Center has undeniably gone through several transitions. As a local conduit for the arts, the DAC is one of just a few venues in which to see art from outside the region. In the past few years, some of the Art Center’s productions and exhibitions have been risky and controversial but resulted in great success.

When brought on board last year, DAC Exhibits Director Peter Hay suggested that any noticeable changes would likely come from his interest in the use of technology, animation and video, as well as his innate social consciousness and desire to build partnerships in the making of contemporary art.

In the role almost a year now, Hay’s long-term goal to support the cultural and creative growth of the arts community remains intact. As such, he continues to put his curatorial efforts into contemporary art themes not previously seen in our region.

The Arts Center’s 41st annual Juried Exhibit, opening June 23, is a manifestation of Hay’s promise – a first-ever national competition that demonstrates creative expression, both in and outside the community.

Vital to any juried exhibit’s success is the judge, and this year Hay chose Benjamin Hickey, the curator of exhibitions and collections at the Masur Museum of Art in Monroe, La. Hickey also serves as the current trustee-at-large of the Association of American Art  Curators. Hickey and Hay first met when Hay was working on his MFA at Louisiana Tech and later became an intern under Hickey’s tutelage at the Masur.

“Benjamin (Hickey) was selected because he is not from the area,” explained Hay. “This makes him unaffiliated with any of our regional artists which in turn kept the judging as fair as possible.”

In addition to opening the show up to national contributors, Hay also noted that it is the first year the show has accepted digital, video and installation en- tries along with traditional fine art mediums. Fortunately, with his enhanced scope of knowledge, Hickey was up to the difficult task.

Hickey acknowledged taking precautions to treat the jurying process as a singularity. “Often times, the pool of work is so varied there cannot be a unifying theme or concept that brings it all together,” he said. “On the first level, I weigh the technical ability of the work I want in the show, and balance that assessment with my sense of whether the artists achieve the goals they lay out for their work. After that, I consider how the work affects me.”

While viewing many of this year’s entries, Hickey realized that they elicited memories of visiting his family in the western part of the country during summers growing up. “I have family in Colorado, Montana, Washington and Idaho,” he said. “As a result, perhaps, the entire show has a coming-of-age feel in terms of my family biography and curatorial practice.”

His candor regarding the work and the choices he made for the exhibition are a clear indication of his honesty as a juror. “If I felt an affinity for a work of art, I accepted it,” he said. “There is a fair amount of hedonism associated with selecting a juried competition, and to deny that would be disingenuous and undermine the overall quality of the show. If I loved some-thing, I chose it.”

In all, the DAC received just shy of 300 entries this year, culminating in the selection of 61 artworks into the show. Of those, 10 are three-dimensional, and although submissions were open to video for the first time, none were accepted.

“I think Ben did a great job of not only selecting a high-quality exhibit – not an easy job with so many outstanding entries – but also composing a diverse exhibit that will have something for every visitor to enjoy,” said Hay.

The overall exhibition is broad in subject, medium, style and technique and as interesting as it is diverse. Visitors will get to see some striking photo-realism, abstract and/or representational paintings, drawings, sculpture and photography, as well as a delightful interactive installation by local artist Sam Bridgham. In addition to other mediums, Bridgham creates sculptures using Legos; some of his so-called “Lego Bombs” have appeared around Durango the past year or two. Legos, however, are not the only material he uses.

“Creatively, my first love is woodworking; particularly the use of fine Japanese chisels of which I have a small collection,” he said. “What I’m attempting in (the DAC exhibit) piece is, for me, the ultimate synthesis of my reverence for wood and my delight for Lego.”

In the DAC piece, he has inlaid Legos directly into carved posts, fixing them alternately in back-lit recesses or in reflective relief.

Other samplings include: Margy Dudley’s “Continuum,” a panoramic photograph of white dunes against a foreboding sky; Jeb Smith’s painting of a gun-slinging cowboy against a backdrop of newspaper clippings reminiscent of a Louie L’Amour book jacket; Michael Darmady’s 1950s sci-fi movie poster subtly turned into a political statement for the 21st century; and Barbara Drewa’s “The Next Chapter,” a startling example of a trompe l’oeil rendered on a wood panel (look close, it’s not a photo).

As with most DAC programs, sponsorship plays a vital role in the juried show: Maynes, Bradford, Shipps & Sheftel LLP was the show’s primary sponsor. Other 2017 DAC sponsors include: Friends of the Gallery; Mary Lyn and Richard Ballantine; Don and Judy Hayes; Russell Engineering; and Oxford Asset Management.

It takes a village to maintain the arts, and Durango repeatedly steps up to the plate to do so. 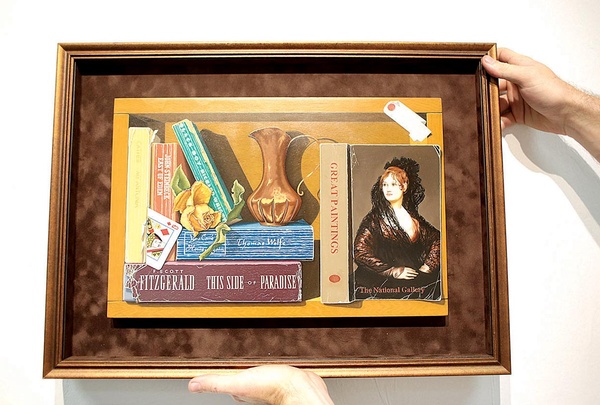 Barbara Drewa's "The Next Chapter," a startling example of a trompe l'oeil rendered on a wood panel./ Photo by Jennaye Derge