Coming soon to a theater near you
After bite of the Big Apple, Colorado native returns to take DAC Theatre reins 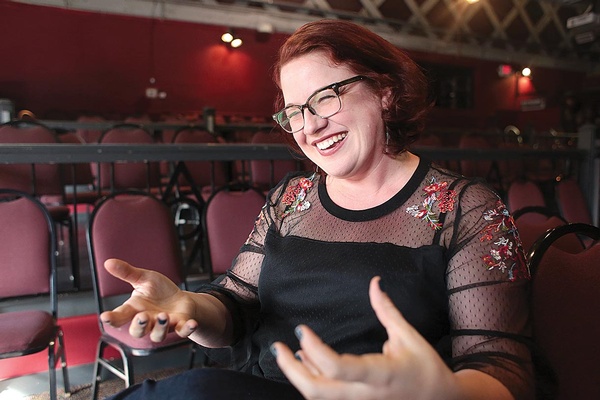 Kristin Skye Hoffmann has recently taken over for Theresa Carson as the DAC's new artistic director. Originally from Pueblo, Hoffmann said she knew from a young age the theater was her calling. She begins her tenure with a production of "Five Women Wearing the Same Dress," slated to open March 2./Photo by Jennaye Derge

Following a nationwide call to fill the vacant director’s chair at the Durango Arts Center, 26 submissions were received by the Oct. 20 deadline. Staff and Board members ultimately culled the list to four contenders. DAC Executive Director Cristie Scott, on maternity leave at the time, conducted the final interviews via Skype with two candidates culminating in the hiring of Kristin Skye Hoffmann. Upon meeting Hoffmann, one is instantly struck by her youthful enthusiasm which, when she begins talking theater, quickly transitions into utter passion. Hoffmann, originally from Pueblo, said she knew at a young age that theater was her calling. “I was one of those kids who knew I’d work in the theatre as soon as I realized it existed,” she recalled. She graduated from the University of Northern Colorado, in Greeley, and ultimately received a Masters Degree in directing from New York’s New School for Drama.

The stage-struck Hoffmann plied her trade in New York and in the process won two “Overall Excellence” awards for directing “Fringe NYC,” an international performing-arts festival now in its 20th year.

With forays into acting, Hoffmann acknowledges the value of being on both sides of the footlights. “Having experience in front of an audience has really informed a lot of my directing style and has certainly given me a profound respect for actors,” she says.

Hoffman also teaches drama students, as an audition coach, and when time permits and the emotional, meditative need arises, paints in acrylic on canvas and glass and creates indoor murals. One might think that an acting career in the “Big Apple” would be a dream come true for someone such as herself, and for awhile, it was. “But,” she admits, “(New York is) a great big crowded city and very expensive; after awhile I missed Colorado and my family.”

The vivacious, red-headed Hoffman could not be more excited to join the DAC staff and fulfill Durango’s thirst for theater and to build on the legacy left by her predecessor, Theresa Carson. Never having been in Durango before this venture, or even working with an arts organization such as the Arts Center, she knows there will be challenges, yet she is eager to tackle whatever comes her way. That means collaborating with outside theater groups, solving the lighting, acoustic and space issues of the DAC theater; meeting a program mandate that includes musicals, comedy, drama and children’s productions; and of course, garnering the support of the Board of Directors.
Her first week in Durango (Hoffmann started Jan. 8) gave her the sense that everyone was supportive, and there’s no reason to believe the enthusiasm won’t continue.

The initial production for Hoffmann is a play she inherited from Carson, but it is one that fits right into her oeuvre. “Five Women Wearing the Same Dress,” slated to open on March 2, addresses some of the feminine issues we are dealing with at this very moment in time. A 1993 comedic play by Alan Ball, the story is about five bridesmaids at an ostentatious wedding in Knoxville, Tenn. Although she prefers directing original plays with no more than three or four actors, Hoffmann has directed ensemble casts with as many as 19 members. Hoffmann gleefully uses a food analogy to describe what moves her the most when seeing or directing a play. Her penchant runs less toward “lemon meringue” escapism, meaning sweet and without much nutritional value, and more toward a “barbecued ribs kind of play,” she quips, “one that sticks with you long after leaving the theater.”

Her ideal production is one with a small cast and one-roomset that is portrayed in real time. “Where life for everyone is changing before (the audience’s) eyes,” she explains. “Even if a text is polarizing or makes an audi- ence uncomfortable, if each individual leaves the theatre with a feeling that something has really happened in front of them, I consider it a job well done.”

Two of her favorites of the genre are “Venus in Fur,” by David Ives (2010), and “Blackbird,” by David Harrower (2005), both of which incorporate dark and complex content. In fact, her choice for her Master’s thesis was “Red Light Winter,” by Adam Rapp (2005), who also wrote “Blackbird.

“Red Light Winter” is the story of two former college buddies who decide to fulfill their fantasy of a vacation in Amsterdam to partake of the “vices” permitted there. The play examines the strong affect friends and strangers have on one another and reflect much of Hoffman’s predilection for more complicated substance. “Some of the most profound theatre I’ve ever seen,” she admits, “were productions where I squirmed the whole time and then a couple of weeks later I realized why it made me feel the way I did.”

Her total commitment to her chosen career became visibly apparent when she took a trip to Amsterdam, amidst the thesis project, so she could interview sex workers and better understand the atmosphere she needed to project on stage and share with her actors.

Here in Colorado, her resume includes working in Pueblo, Greeley and Denver. She said she is both excited and determined to find material Durango audiences will respond to.

Although she only recently arrived, Hoffmann feels local theater lovers along with the Arts Center team want her to thrive and says her job is, “to make sure what they want is done well.” 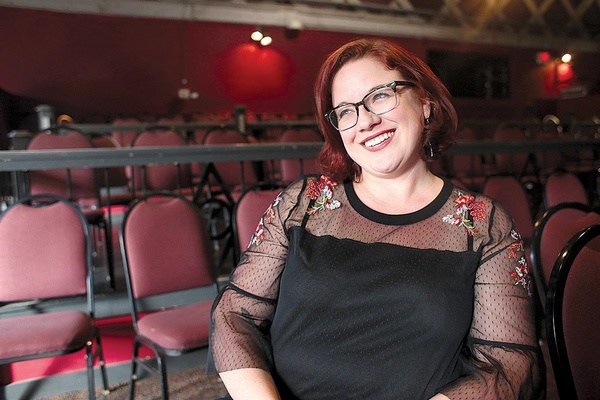 "Five Women Wearing the Same Dress" will be Hoffmann's first foray into local theatre. The 1993 comedy is about five bridesmaids at an ostentatious wedding in Knoxville, Tenn.