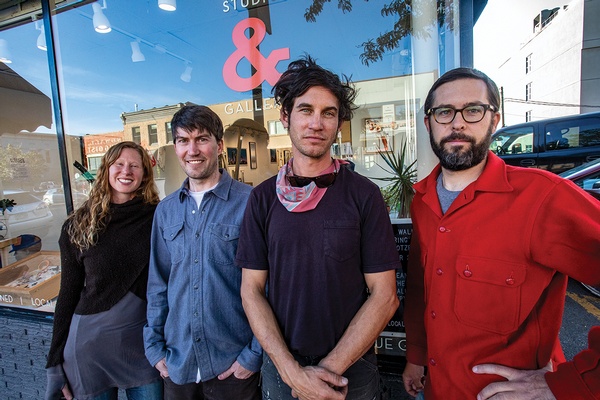 There are some new kids in the 1000 block of Main Avenue. Studio & Gallery, the venerable downtown bastion of off-beat, contemporary local art, has added two names to its placard: Shawn Lotze and Jon Bailey.

Lotze, a printmaker, sculptor and “jack of all trades,” and Bailey, whose colorful hand-drawn illustrations have become a staple in the cycling scene, came aboard in June and August, respectively. They join existing member-artist Elizabeth Kinahan and studio founder and mastermind, Tim Kapustka, as well as a handful of other artists who are represented by the gallery.

“Both of these guys have been members of our family for a long time,” said Kapustka, who opened Studio & in 2010 with three other local artists who have since moved on. In that time, there’s been a rotating cast of about 15 or 16 member artists. “Sometimes I feel like the bass payer who got the rights to the band name and keeps performing under the original name,” he said.

Lotze and Bailey have been involved in numerous Studio & shows as well as the annual holiday Bizarre Bazaar over the years, making them natural choices. Plus, they both come from different disciplines, serving as good complements to Kapustka’s bold but brilliantly simple graphic depictions of everyday objects and Kinahan’s lifelike yet ethereal animal paintings.

But before signing on the dotted line, Kapustka wanted to make sure the two knew what they were signing up for.

“My rule is, as soon as someone says, ‘yeah,’ I full-on try to talk them out of it,” said Kapustka.

This may seem like a strange recruitment tactic, but according to Kapustka, it’s just a precautionary measure. He, of anybody, understands what it takes to be a working artist in Durango. In addition to hanging and taking down shows and working on their own art, members have to staff the floor, curate the everyday displays, and meet and greet customers. (Which includes the distinctively un-creative task of running the register.)

“When people come in, you’ve got to be a shopkeeper,” Kapustka said.

Despite the sidework – or perhaps because of it – Bailey and Lotze are embracing the opportunity.

“It’s been my favorite studio in town since I moved here,” said Lotze, who came to Durango in 2011 from the East Coast, where he earned an art degree from Virginia Commonwealth University. “I’m definitely standing on the shoulders of giants here.”

He said he appreciates Studio &’s mission, which is to take risks by supporting local artists who may not exactly create mainstream work. “Studio & is the only one that gave out opportunities like that,” he said of his early days as an artist. “That’s part of the appeal that brought me to Studio & in the first place. It wasn’t just about one artist.”

Bailey, who has been involved with Studio & since its inception, said now that the hecticness of moving into the studio is over, he is settling into the daily creative groove.

Lotze, who installs garage doors by day, agrees that gallery life is a welcome change.

“I call it my sanctuary,” he said.

Lotze is the first of the two to have his own show at the gallery – a collection of three new sculptures, “Everyday Wings,” which is up now through Sat., Sept. 28. Lotze said he tries to use found, recycled or scrap items in his work as much as possible. He also likes to imbue humor into his pieces, whether it be a scrap-metal action figure or a dinette table deconstructed and flipped on his side.

“The goal is to make it fun, but if you want to go into more depth, the depth is there,” he said.

Bailey, whose epic exploits on two wheels are the stuff of legend, naturally got his start making bike-related art, posters and the like. (In a possibly lesser-known factoid, he went to Kent State on an art scholarship, so has the artistic chops as well.) For him, joining Studio & was about finally having a home base for his growing endeavor. Like many artists, he finds the whole self-promotion/technological piece of the puzzle difficult to embrace, but nonetheless necessary. “I’ve done my hardest not to have a platform, no website, social media or Instagram,” said Bailey. “But, when people ask ‘Hey, where can I see your art?’ I thought it’d be nice to have a spot where you could go see it and you didn’t need wi-fi.”

He also sees the studio as offering a place for him to expand creatively.

And amid the fresh work, fans can still expect to see one of Bailey’s favorite subjects, the solar-paneled train, which he has dubbed the “Durango-Silverton Solar Railway.”

“I’ve been putting solar panels on the train for the last decade,” he said. Sometimes, with varying reactions. One year, he made art for a volunteer T-shirt for a local event, which featured a whimsical solar panel-sporting train. When the T-shirts came out, he was surprised and a bit dismayed to see the solar panels had been erased.

“That just pushed more and more panels on every train I drew,” he laughed.

For Bailey, it’s not about criticizing, but about educating and using his art for activism – “dreaming better not bigger,” as he says.

And the environment plays a central role in that.

“I figure that should be the only thing we should be working toward protecting,” he said, adding that, without the Earth, humans and life would cease to exist. “In general, that’s always been part of how I’ve looked at drawings – systems, ecology, patterns and nature ... they just inspire me.”

And who knows? Maybe next time you’re downtown, you can drop in and see Bailey’s pen running wild on one of his intricately connected doodles or Lotze turning some old Formica into a family dinner table gone awry.

Which is just how Kapustka has envisioned it from the start. Although over the years he admits the studio has morphed to become more gallery than studio, having working artists on site has always been part of Studio &’s DNA.

“We’ve always referred to that as the ‘zoo’ factor,” he said. “‘Oh, you can see real live artists at work.’ We’re hyper-intentional about keeping that.”

And now, there’s two more talented artists to add to the Studio & menagerie.

“That’s the exciting stuff for us,” he said. “Now people can see and buy Jon and Shawn’s art. And that’s what’s cool.” 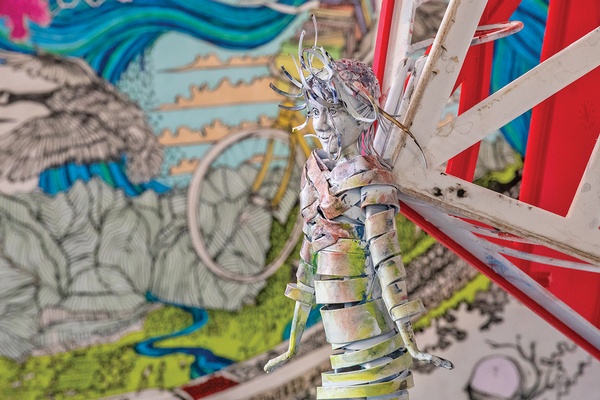 "Allisons' Acrylics," by Shawn Lotze, is on display at Studio & through Saturday as part of his "Everyday Wings" exhibit. It's juxtaposed against Jon Bailey's "New American Manifest Destiny," which features his trademark solar- paneled train (and also graced a past issue of The Gulch magazine)./Photo by Stephen Eginoire